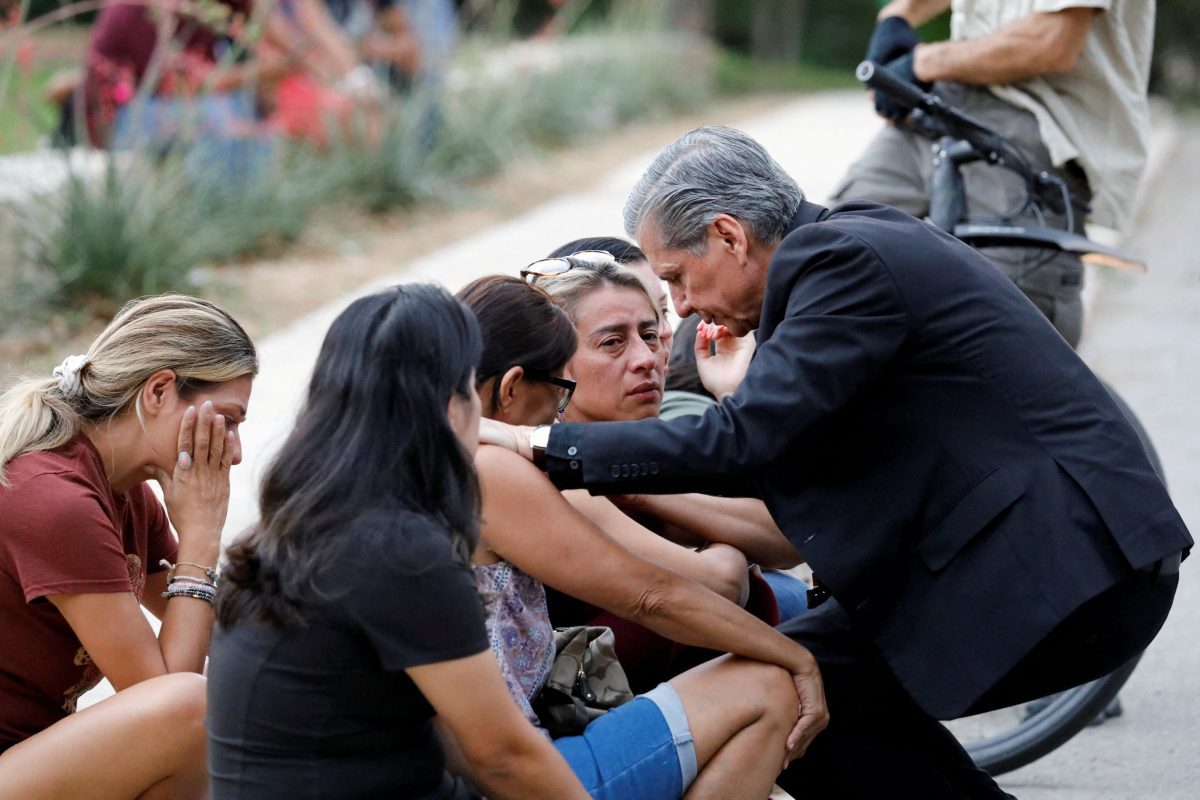 Archbishop Gustavo Garcia-Siller of San Antonio comforts people as they react outside the SSGT Willie de Leon Civic Center, where students had been transported from Robb Elementary School after a shooting, in Uvalde, Texas, May 24, 2022. (CNS photo/Marco Bello, Reuters)

ORLANDO  |  On May 24, 2022, 19 students and two teachers lost their lives at Robb Elementary School in Uvalde, Texas.

For Catherine Galda, it instantly brought her back to 2012 and the memories of the Sandy Hook Elementary School shooting in Newtown, Connecticut. Her 7-year-old daughter was in the classroom across the hall from the shooter. The youngster survived physically unharmed, although the horrors of the day will never be forgotten by the family.

“Shootings — Pulse, Stoneman Douglas and now Uvalde — bring it back to us in spades,” Galda said. “But like any other loss, for me and mine, it’s not that the pain completely recedes, or the impact completely recedes, but life goes on. Kids have to go to school, and you’ve got to put food on the table. So, while the pain remains, time blunts it a little bit.”

Galda is a trauma therapist and director of Catholic Charities of Central Florida’s Behavioral and Mental Health Services. She understands, firsthand, the terror experienced by the Texas families, and felt compelled to reach out and help residents of the small town.

At the time of Sandy Hook, Galda was a homemaker, but she was also a clinical therapist specializing in trauma. As counselors, clinicians, celebrities and not so famous people descended on Newtown, Galda helped determine where they could best serve. She managed care for those who needed it and planned for speakers to come and help residents on the long road to recovery, while writing two grants to assist long term recovery.

Now, 10 years later, Galda reached out to the nearest Catholic Charities agency to Uvalde, that of the Archdiocese of San Antonio, to offer faith-based, practical guidance. Since residents of the small, working-class town are mostly Latino, she also reached out to nearby parishes.

“(In these situations) of strife and suffering, we turn to the Lord,” Galda said. “My thought was the greatest access to support would be blending their faith and belief in God and Jesus and the practical services they would need to get through this experience.”

Within days Galda connected with Rey Acosta, vice president of programs at St. PJ’s Children’s Home. The organization is a satellite of Catholic Charities (San Antonio) providing counseling in and out of their residence. Over two phone calls and a Zoom meeting with area clinicians, Galda prepared Uvalde counselors for what to expect in the aftermath of the tragedy, using her own experiences from Sandy Hook as a roadmap. She intimated what was likely to happen, noted the research Catholic Charities had done, and what could work best.

At first, Acosta shared the difficulty they were having in getting people to fill out intake forms. Galda suggested the forms could wait, and to focus on presence and prayer instead.

“In those first days, people are going to want to come together and talk and just share that this is awful,” Galda explained. “Their immediate needs are being together and being able to breathe, grieve together.”

Because people turn to their faith for solace and comfort, she suggested crisis response teams be formed in parishes. She also suggested contacting Catholic and non-Catholic churches “to create the blend of our walk with Jesus and the practical application of skills and interventions that help alleviate suffering.”

She added, as time went on, agencies would discover an emergence of people in need of intense counseling.

“That again is where the church is a hub, because where do people go when they are in crisis?” she asked. “If they are faithful, they go to their faith in an attempt to understand, in an attempt to heal, and grieve with God.”

She said people grieve in different ways. “The honest truth is that I can be mad at God and love Him at the same time,” she continued. “And I think that a lot of people go through that. It was not so for all my family members, but it was the true for me in that moment, because I didn’t understand. I still don’t understand. But I’ve come to accept that I don’t get to understand everything. That’s part of my faith journey.”

Acosta recently wrote an email to Galda. In it, he explained, “When we began this journey, it was difficult to see what the road would look like, but your help made a big impact on our team here. We have expanded our services to providing care to children in the Catholic school.”

Rey went on to say many children decided not to go back to public school, so they are working with many of the survivors and their families directly. It is Galda’s hope that with time, attention and assistance, residents young and old will find their anxieties lessen. She also hopes they understand they are not alone.

Deacon Gary Tester, president of Catholic Charities of Central Florida, called the effort a “faith network.” He likened Galda’s response to help as embodying the Corporal and Spiritual Works of Mercy.

“When we had the Pulse shooting here, we had many agencies across the country giving guidance and support, offering help. We try to do the same thing there. It was on Catherine‘s heart to do that. They responded back, ‘Anything you can do to help us, because right now, we are flying by the seat of our pants,’” Tester said. “In this case, Catherine’s been there and done that. God has graced her with the ability to recognize the emotions that will go with that kind of horrific tragedy and to be able to sort through those and respond from a faith standpoint. It is because of those shared experiences that we can be united, even in the most difficult of times.”

By Glenda Meekins of the Florida Catholic staff, September 09, 2022