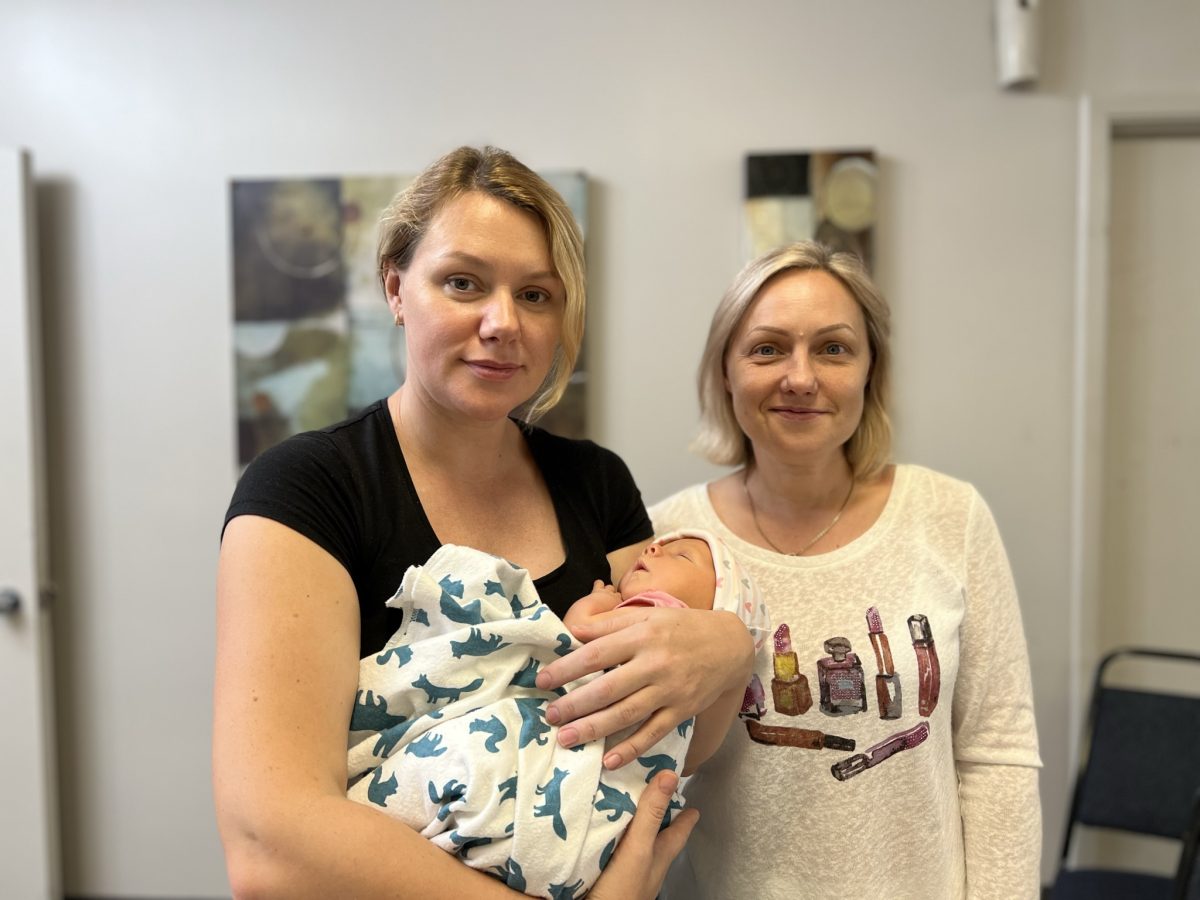 ORLANDO | Svetlana and Ivan wanted to have another baby for years. The excitement at the news of her pregnancy was short-lived as Russia’s invasion of Ukraine began February 24, 2022, tempering their joy.

Finishing her first trimester, the couple and their 10-year-old son decided to stay in Odesa as long as possible. Then, on April 23, Svetlana was in her ninth floor apartment when a cruise missile slammed into the building, exploding four stories beneath her and leaving portions of the third through fifth floors hollow.

She ran from the explosion. “There was smoke everywhere. She couldn’t see,” said her sister, Olena, who translated for her younger sister. “When she made it outside, she saw a lot of people injured. Some were dead—even a three-month-old girl died. There were broken cars and fires everywhere.”

Svetlana later showed Olena a photo of a laptop, deformed by the searing flames. “Almost everything in the apartment was trash. They can use nothing,” Olena said.

Plans changed quickly. Svetlana and her family took refuge in a friend’s home for a few weeks until she and two other mothers coordinated a trip to Romania with their children—joining millions of Ukrainians fleeing to safety throughout Europe.

Although many fled to Poland, the distance was greater and prolonged by the sea of people fleeing to the border. Romania was only a day away by car. Ivan stayed behind. No man under age 60 could leave Ukraine. Many men remained, proudly serving as needed, whether volunteering to protect abandoned homes from looters or being recruited for the military to defend their homeland.

Arriving in Romania, local volunteers offered their homes to Svetlana and other incoming refugees. Olena remembers Svetlana video chatting with her, showing a refrigerator packed full of food. They were moved by the generosity of their hosts.

In Orlando, Olena immediately began proceedings to bring her pregnant sister and nephew home with the help of Uniting for Ukraine – a program designed for Ukrainian citizens and residents to unite with family members in the United States, granting them a temporary stay of two years.

Svetlana arrived in Orlando seven months pregnant and with her 10-year-old son, June 9th.  Her sister and parents greeted them, relieved.

Thanks to the lawyer helping the family through the Uniting for Ukraine program, Olena called Catholic Charities of Central Florida. “On the first day, many people helped us at Catholic Charities,” Olena recalled. “They helped complete all the documents we needed and helped us apply for Medicaid as Svetlana was seven months pregnant and 37 years old.” Considered high risk and so close to delivery, finding a doctor became a priority. “We got Medicaid, food stamps, cash assistance, everything… (Catholic Charities) helped us, called us, told us what we needed to do each day.”

She noted, “They help with everything people need for a normal life. Catholic Charities put their finger on the pulse (of what we needed).”

Staying with their parents in Orlando, Svetlana delivered a healthy baby girl, Helena, in August. Ivan met his daughter via video chat. Although the family finds itself on different continents, they communicate daily through a phone app and continue to pray for an end to the war.

Getting teary-eyed, Olena said, “I am very appreciative for everything Catholic Charities does. Ten years ago, when I arrived here, people told me nobody will blame you for your English not being straight. The people here in America are very kind and they will help you. After 10 years, I want to say it’s true.”

Arriving during the rainy season, the thunderstorms initially scared Svetlana. “It made her scared because it reminded her of everything,” Olena said. “Now she is more relaxed.”

She said her sister and baby are alright now and have shelter—not a typical shelter but one that “embraces her”, at her parents’ home.

Maribel Macias is one of the family support specialists at Catholic Charities who assisted Svetlana in adjusting to her new home. “It was a pleasure to meet Svetlana and her family and to help start the process to receive the help they need during this transition in their lives,” Macias said. “Sharing these stories and many more to come gives hope to all families who must leave their countries, their loved ones, etcetera, to begin a new start in their lives.

Deacon Gary Tester, President of Catholic Charities, noted that the Temporary Protected Status (TPS) declared by the federal government for families and individuals fleeing the war in Ukraine opens the door for hope and a new life. “I can’t imagine the terror that families like Svetlana’s experience. Our goal at Catholic Charities is to respond with love and compassion, bringing Jesus’ love to those broken by man’s violence. Our teams strive to do that every day.”

By Glenda Meekins of the Florida Catholic staff, September 22, 2022