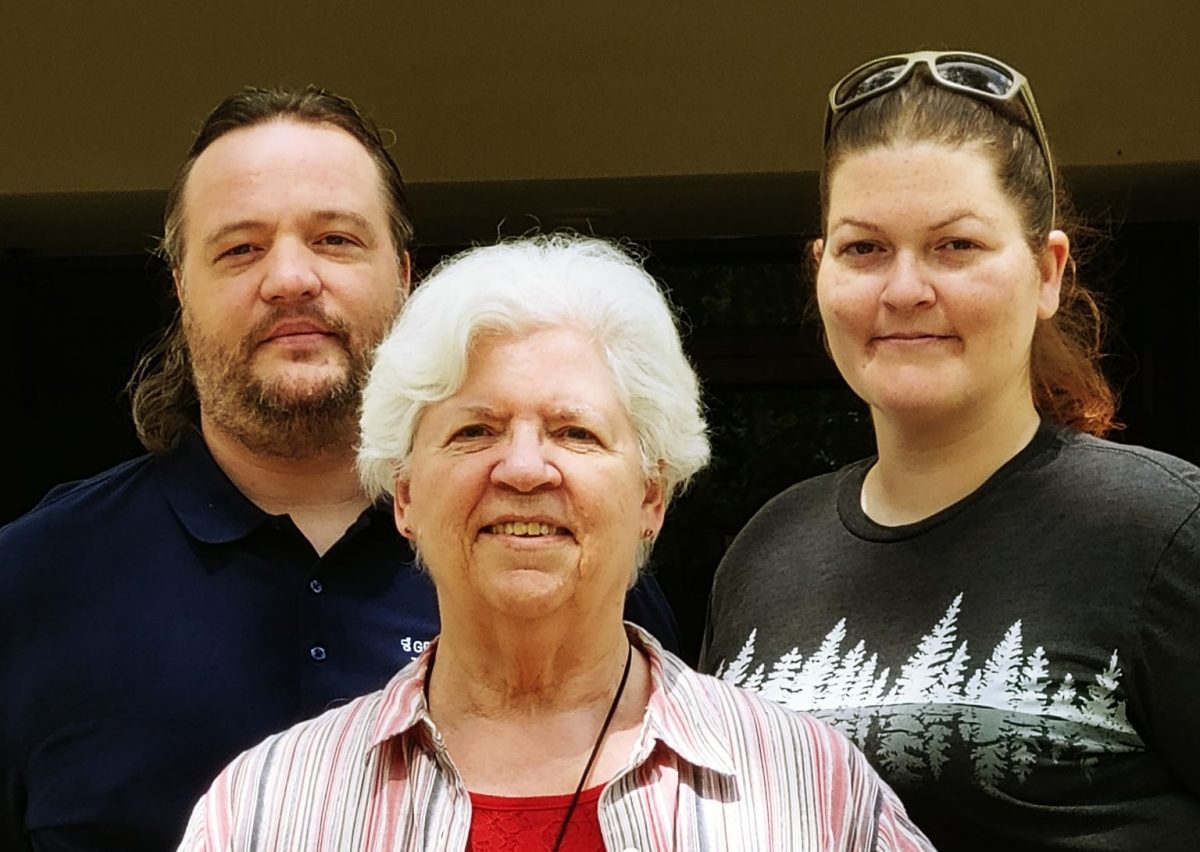 Kevin Wiegand and his wife next to Mollie Wiegand (center). Mollie and her late husband, Frank, have 13 children, four adopted through foster care. (COURTESY)

ORLANDO | A few years ago, Kevin Wiegand attended his biological father’s funeral with his sister. After meeting his natural family, he found some of the conversation disturbing. “Some were not very good people,” he said. “Had I been raised in that setting, I would be a completely different person.” Wiegand was lucky. He was five when his foster parents, Mollie and Frank Wiegand adopted him and his three siblings. Although not all were able to overcome the scars of their early years, Wiegand credits his foster parents for who he is today.

Now, Kevin, a Purdue graduate and Eagle Scout, is the father of two, married to his wife for 18 years. As a parent himself, he realizes how difficult it must have been. “It was hard for them and hard for us too!” he said. The Wiegands had nine children of their own. Frank used to say, “The best job you can do is to raise children.” Wiegand recognized, “It was certainly a challenge. If my dad was still alive, he could certainly attest to that. We were a handful, but their faith pushed them through it for the better…”

The strong faith in which they were raised “shaped” Wiegand who lives next door to his mother, Mollie, secretary at St. Lawrence Parish in Bushnell. Mollie and Francis fostered 23 children from 1982 to 1987. When Mollie thinks of those years, she is reminded of Matt 6:26: “Look at the birds: they do not plant seeds, gather a harvest and put it in barns; yet your Father in heaven takes care of them! Aren’t you worth much more than birds?” She said, “These kids don’t have anyone to take care of them, but God does.”

She saw much sadness in those years. Seeing so many come with bruises and learning how much abuse took place, she said she and Frank wanted to “try to put an end to those cycles. I think we’ve succeeded there.”

Many who foster had difficult lives themselves. Aaron and Andrea Moore of St. Margaret Mary Parish in Winter Park come from different backgrounds. Aaron explained Andrea had a “diverse origin story”. Her experience made her naturally compassionate “for those having a hard time growing up like she did.” He admits, “She always had the charity in her heart. I didn’t.” It took some convincing, but Aaron agreed to foster. In the first three years, they fostered more than 30 children – some simply overnight until a relative was located. Others for longer periods. Sometimes it was “heart wrenching”. It was also touched by memorable events, like when one of the boys they cared for called Aaron on Father’s Day.

They adopted “three redheads”, Aaron said. “It’s a very long, emotional story… But we just want to take care of these kids that can’t take care of themselves.” He acknowledged, “It was a calling. (Andrea) brought me to the water… I’m all in.”

A key element for both families is exposure to faith. Aaron noticed, “We were their sole exposure in every case. It’s amazing how most of them, even at a young age, just latched on.”

Lothar and Leisha Schulz of Most Precious Blood Parish in Oviedo agree. Every Sunday you can see them, their two boys – the first they fostered – file into one of the first few pews in church, accompanied by the children who are part of their family that week. Sometimes it’s a baby and at other times it is siblings, their preference is to keep families together.

They began foster parenting in 2016. Married later in life, Leisha learned she could not have children. The plan was to foster with the goal of adoption. Their desire was to adopt older children who have a harder time finding a permanent home. Most of their foster children have not heard of Jesus or had any type of faith modeled for them. The children’s spiritual growth also nurtures them. Leisha, a convert to Catholicism, earned a Master of Theology in order to better equip herself to pass on the faith. Lothar notes the faith “is not forced onto them, but it’s part of our life, always there.”

All of these couples will tell you fostering is a calling. “I love them to pieces when they’re here and when they leave, I cry, I mourn,” Leisha admits. “I shut the door and cannot even go into that bedroom for quite a while. Then I go through, give it time, … and wait.”

She says, “They tell you, you’re not fostering properly if you don’t miss that child when they leave. You love them as your own. It’s bittersweet when they go…”

Understanding it all is a gift from God, Lothar notes, “Nothing is ever truly ours. Everything has been given to us for a certain period of time, and we’re meant to do something good with it. I see this as just another facet of that aspect. God loves us all.”

If you are interested in learning more about foster parenting children in Florida call 1-83-FOSTERFL or visit MyFloridaMyFamily.com.

If you are interested in immigrant and refugee foster care, please reach out to one of the two U.S. Conference of Catholic Bishops’ foster care program partners in Florida: Catholic Charities of the Archdiocese of Miami, Inc., urmp@ccadm.org or (305) 883-3383 or amolina@ccadm.org or Bethany Christian Services, Central Florida, (407) 877-4006.

By Glenda Meekins of the Florida Catholic, May 5, 2021