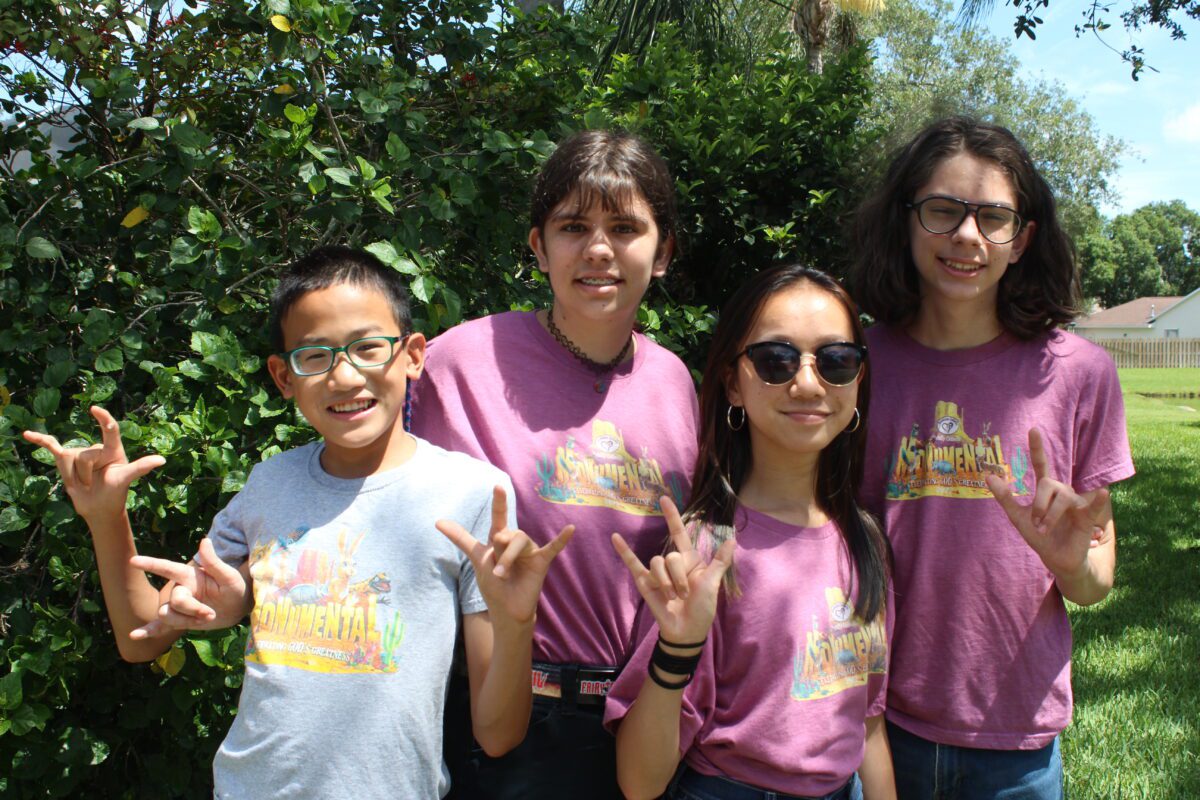 (From left) Xander with siblings Adelie, River and Duncan at Vacation Bible School at Ascension Parish. River served as Xander’s personal interpreter and crew leader and Adelie taught the core team American Sign Language for songs and daily responses to immerse Xander, who is deaf, completely in the experience. Duncan also served as a crew leader. (COURTESY)

MELBOURNE | Xander can barely hear. He relies on American Sign Language (ASL) to communicate. This year, for the first time, Ascension Parish in Melbourne is committed to making this vacation bible school different. Rather than simply adding gestures to songs and responses, attendees would learn sign language, to be more inclusive.

Xander’s language story began when he was adopted in 2015 from China. At the age of 5, he had no communication skills – written, lip reading, or signing. “He would spend a lot of time pointing,” his mother, Clare, recalled, “He doesn’t have a lot of memories from that long ago because you start to form memories when you form language.”

Knowing they were going to adopt, Clare and Nicholas and their other three children began learning ASL. The couple took some classes at the college and the rest they learned from YouTube.

Participating in the celebration of Mass one day, Annie White approached Adelie, the eldest of Xander’s siblings as she noticed she was signing throughout the Mass. Adelie explained her family would be adopting a deaf boy and they were trying to learn to sign. White began to cry. She prayed God would show her how to use sign language to serve others. Clare cried too, for she prayed God would send her help to learn sign language and help the family. White introduced them to the deaf ministry and so began their venture into ASL and a whole new world. The deaf community accompanies them today, as friends.

Xander was almost 6 years old when he first experienced VBS. Young, timid, and fairly new to ASL, although he had an interpreter with him, the gestures for the songs were simply that – gestures. Unable to read lips and without others signing, the hand motions confused him. The experience was largely void of meaning.

This summer, about to enter sixth grade, he tried again. Many of the children already knew him from church. In preparation, Betsy Glasenapp, Ascension’s director of religious education, wanted to try and address the communication issue.

She felt everybody needed to be involved. Xander’s sister, Adelie, taught the signs for the songs and daily responses to the leadership team. “They were just as determined to do the signs correctly, then they taught others,” Glasenapp said.

Glasenapp understood it is likely most of the children, especially the youngest, were not even aware they were learning sign language. Yet she felt gratitude, “To be able to bring it to the greater community in a way that is so subtle they don’t realize what went into it.”

Xander’s sister, River, also adopted from China, served as his personal interpreter and crew leader, going from station to station. She appreciated being a part of it and said it was nice to see her brother more involved. Adelie, who worked hard to match signs with meanings of songs, agreed. Duncan, their brother, also played his part as crew leader. It was a true community collaboration.

For Glasenapp, what this adventure has taught everyone is “Monumental” – the theme for this VBS. “This, hopefully, has given them a greater awareness of the wider Body of Christ. And it shows it’s not impossible to do. That’s the encouraging part. We just have to bring the rest of the Body of Christ, the rest of the Church that has those gifts and abilities and learn from them.

“We don’t all have the same gifts,” she said calling to mind our theology from Galatians. “But we’re all called to serve each other and the community.”

By Glenda Meekins of the Florida Catholic staff, July 28, 2022