Deacon serves others to honor life 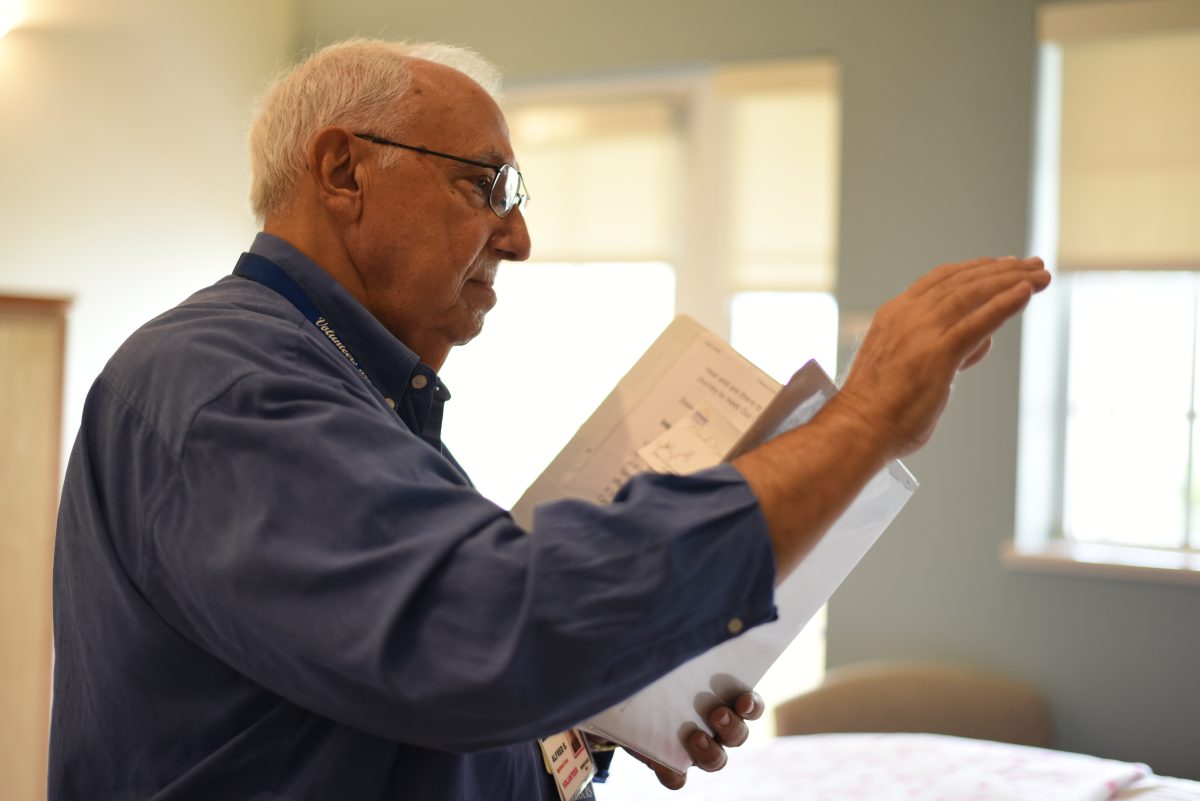 Deacon Al Somma of St. Joseph Parish ministers to patients in hospice care at Health First William Childs Hospice House in Palm Bay. His ministry was inspired byt he extraordinary care given to his wife before she passed in January 2022. (GLENDA MEEKINS)

PALM BAY | Watching a loved one slowly decline in their final days and saying farewell is difficult. For many the experience is so devastating, they cannot accompany their loved ones in that process.

Deacon Al Somma makes that journey easier, thanks to his loving spirit and hard-learned experience.

Even before becoming a deacon 30 years ago, Deacon Somma loved to care for others. His daughter, Nancy Van Sant — one of five — recalled the entire family serving their parish, and watching her father constantly exude his generosity toward others. He led by example. When Somma’s wife died in January 2022, after several weeks of hospice care, none of his children were surprised their dad became a hospice minister.

“It is literally heartbreaking to watch people die. You really have to be somebody special. Hospice care is a vocation,” Van Sant said. “(My father) has a lot of compassion for others. He really cares about making sure everybody’s okay. Even when he’s hurting, it doesn’t matter. He just wants to make sure everyone else is taken care of.”

After months of taking care of his wife at home, “totally, mentally, and physically exhausted,” Deacon Somma accepted the urging of Judy’s doctor to place her in hospice care. It was a difficult decision, but taking her to Health First William Childs Hospice House in Palm Bay was a welcome blessing and an inspiration. Assured Judy’s every need was met, he and his daughters could focus on simply loving her.

“They kept her very comfortable. They made sure she was not in pain,” Deacon Somma said. “The care she got was unbelievable. They bathed her every day and even washed her hair.”

Van Sant said it was not long after her mother went into hospice that her father began praying with other dying patients and their families, offering solace and peace in his typical compassionate manner. She understood it was not just a way to cope with his own loss, but a need deep within him.

“He was ministering to people every day,” Van Sant said. “When we (she, her sister, Lisa Juchniewicz, and Deacon Somma) got there, he would say, ‘hi’ to my mom and if anyone needed to talk, he was always there for them as well. That is what he needs to do for other people. That way, they have the comfort that we had. It all works together.”

The hospice center had a minister who came daily, but no one who could understand a Catholic’s views on eternity, the importance of dignity of life, and the Sacraments. Deacon Somma realized there were other Catholics there who needed ministering.

He asked a nurse at the hospice if there were Catholics at the facility who he could offer his ministry. She sent him to a room where he introduced himself, explained who he was and how he understood what they were experiencing. It was the beginning of his hospice ministry.

Originally trained as a bereavement and grief minister in his home Archdiocese of Newark, New Jersey, Deacon Somma already served in the spiritual care of patients at nearby Palm Bay Hospital twice per week.

But serving at hospice was different.

“I can go to the hospital and do spiritual care there. I know most of these people are going to get well. Even though I pray with them and offer them the Eucharist, we can talk about what’s going on in their lives. But when it comes to going to hospice, you know the family is going to go through what I went through. There is that anxiety. There is that knowing that it is almost the end. I feel blessed because I saw my wife take her very last breath. I know that if these families are there at that moment, I know what they are going to experience, and it is something that is very difficult.”

One such family was that of Wendy Uramkin, her husband, Michael, and her sister-in-law. They prayed with Deacon Somma and his daughters and often supported one another.

“There was an immediate connection in faith we were very grateful for, and it was very comforting,” Uramkin said. “Having a Catholic deacon pray with you just enhances the dignity of the dying experience and makes it very much easier to accept.”

She added since both she and Deacon Somma experienced a long marriage, Uramkin knew the deacon understood the depth of her grief. She and Michael were married 50 years, and the Sommas were just shy of their 60th anniversary before Judy passed away.

As he reflects on his new ministry at a late stage in his own life, Deacon Somma described the journey he took with his wife during her final moments. He recalled holding Judy’s hand, her squeezing it despite being unconscious, and then her drawing her last breath. It was a moment filled with sadness of loss, joy for her eternal rest, and gratitude for being present.

“We are on a journey with them, and we are going to go with them as far as the front door,” the deacon said. “That gave me consolation knowing what I had just gone through with my wife. That I was with her until she was at that front door.”

Leidy Rivas, director of the Culture of Life Office at Catholic Charities of Central Florida, said while talking about death and dying can be difficult, it is a necessary conversation. She said having a better understanding of what Catholics believe can help provide a different outlook and bring comfort and peace as the end of life draws near.

“We are all involved in God’s work in promoting the dignity of the human person in all stages of life,” Rivas said. “For Catholics, death is not the end, but the beginning of the eternal life with God, the Father. Our faith and Creed assure us that we ‘look forward to the resurrection of the dead, and the life of the world to come.” To learn more about Catholic teaching on death and eternity, go to https://www.flaccb.org/end-of-life-care.

By Glenda Meekins of the Florida Catholic staff, October 13, 2022