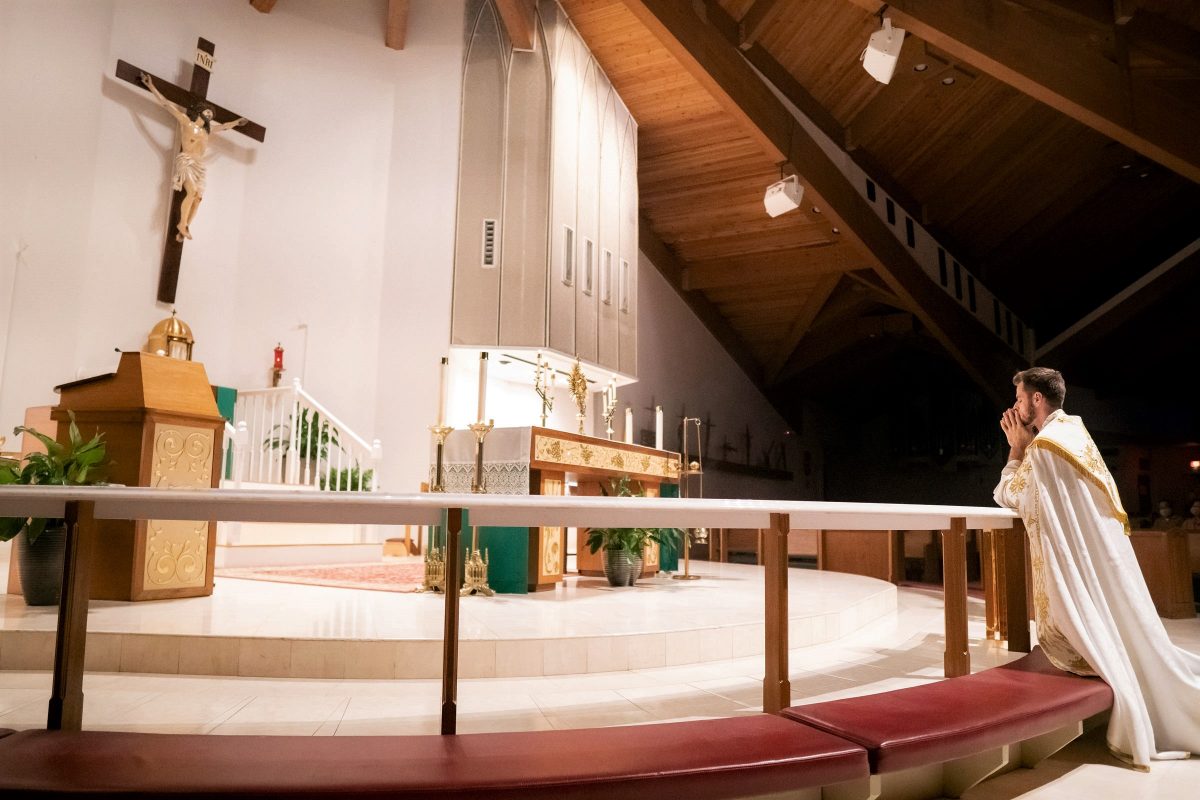 Father Benjamin Lehnertz of St. Joseph Parish in Orlando prays before the Blessed Sacrament. His reflections and homilies at the Wednesday evening Mass and Eucharistic Adoration this year have a heightened focus on St. Joseph. The parish also plans to have guest speakers and a consecration to the saint to honor the Year of St. Joseph, as proclaimed by Pope Francis (Dec. 8, 2020 – Dec. 8, 2022). (ANDREA NAVARRO | FC)

ORLANDO | Parishes around the Diocese of Orlando are celebrating the Year of St. Joseph, proclaimed by Pope Francis on Dec. 8, 2020. The year coincides with the 150th anniversary of St. Joseph’s appointment as the Patron of the Universal Church by Pope Pius IX. 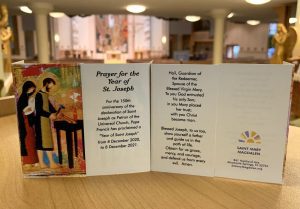 In the recent Mass for Life, Bishop John Noonan quoted Pope Francis who said of St. Joseph, “Each of us can discover in Joseph — the man who goes unnoticed, a daily discreet and hidden presence—an intercessor, a support and a guide in time of trouble.”  The bishop added, “He is a model for all of us as he lived discipleship in the Lord. He reminds us our daily living is to bear fruit in salvation history by our docility to God. His faith in God is offered to assure us of Emmanuel, God with us.”

Seeking to do so, parishes are finding ways to educate and reflect on the earthly father of Christ, described by Pope Francis in his recent Apostolic Letter ‘Patris corde’ (With A Father’s Heart), as “a beloved father, a tender and loving father, an obedient father, an accepting father; a father who is creatively courageous, a working father, a father in the shadows.”

Father Charles Mitchell, pastor of St. Mary Magdalen Parish in Altamonte Springs noted in a recent homily, “What is so mysterious, and in a way wonderful, is that St. Joseph, given a pivotal role in the unfolding of salvation by accepting the responsibility of the foster father-ship of the Son of God, is not given a word to speak in Sacred Scripture… We can only gauge him by his actions – obediently, humbly, in perfect silence he responded. This simple carpenter was asked to raise the holy child of God, protect him, hold him to his heart and to give him what he had.” Facilitating the grace of the saint’s guidance, faith formation classes prepared activities and reflections on “The Sleeping St. Joseph”. Prayer cards in English and Spanish were distributed, encouraging intercessory prayer. 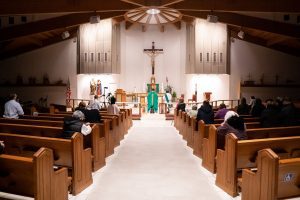 “We need the example of St. Joseph for our Church and in our own lives in these most challenging of days,” the pastor said. “Whatever the makeup of our families, still we can, each one of us, find inspiration.”

Father Benjamin Lehnertz has long been inspired by the quiet father figure, so he was “elated” when he heard an entire year was being dedicated to the saint. His appreciation began his senior year of college seminary. Advent approached so he reviewed the birth narratives, asking God in prayer on what themes he wanted him to focus during the season. He was drawn to Joseph in Luke’s telling of the nativity story. “In particular, how strong, stable, and steady he had to be for Jesus and Mary,” he said. He became aware of Joseph’s presence in the Psalms he prayed, in the Liturgy of the Hours. He tried to ensure he was “making room in the inn of (his) heart for the holy family.” It was a pre-figuring of sorts, of his future assignments, all of which have had to do with the Holy Family. First, he was sent to Annunciation Parish (Altamonte Springs), then Holy Family (Orlando). Then, before knowing he would be assigned to St. Joseph Parish (Orlando), he re-consecrated himself to the saint. It was an answer to prayer.

“Joseph is called a just and righteous man—about the highest compliment the Scriptures can pay to a human being. He’s a model for us of what it looks like to answer the Lord’s call to holiness,” Father Lehnertz said. “I think sometimes we just don’t consider the personal St. Joseph.”

For him, this year is so important because St. Joseph “will be put on full display as a model for all of us.”

Like Holy Name of Jesus Parish in Indialantic (Feb. 15-March 19), St. Joseph Parish will make an act of consecration to the saint beginning March 19 on the Solemnity of St. Joseph. St. Joseph Parish is doing a 44-day preparation to make the act of  consecration on May 1, the feast of St. Joseph the Workers, the patronal feast of their parish. “It’s a nice way to go from St. Joseph as a patron of the universal Church (March 19) to something more local and particular to our community (May 1),” he said. He prays it helps the men and women of his parish “grow in their discipleship.”

In addition, because St. Joseph is the patron of the parish, they are “dialing up” their Wednesday devotion to him, focusing the Wednesday evening meditations and homily on him. The parish also hopes to bring in a special speaker or two.

Trinity Catholic High School in Ocala’s campus minister, Liz Cook, made St. Joseph the focus of their Peer Ministry retreat. “So we are striving to be like him – obedient, supportive, accepting, loving, a hard worker – in all we do,” she said. Because the campus chapel’s stained glass windows were designed and installed by the Sisters of St. Joseph in St. Augustine, weekly postings of a video prayer are being shared on their Facebook page.

Holy Family Parish has devoted a web page to the saint including news, novenas, and the Vatican document declaring the year.

St. Mark the Evangelist Parish in Summerfield hosted a votive Mass Jan. 13 for St. Joseph, and is asking parishioners to post personal testimonies about St. Joseph and his impact on their lives to the parish Facebook page.

San Pedro Spiritual Development Center in Winter Park recently hosted a senior day, “From Joseph to Jesus,” with celebrated author Karl Schultz. Schultz appears regularly on Divine Mercy radio and will speak on the subject at other parishes in the dioceses this year. Recognizing “Joseph’s inspired herald” along with that of other evangelists, the presentation revealed how they are the “bridge between the old and new covenants,” Schultz said. The morning retreat brought a “deeper awareness of the humanity of St. Joseph.”

Although Father Lehnertz was speaking of the act of consecration to St. Joseph, when he said, “This is an invitation from Jesus to His Church to get to know His family better,” the same can apply to the entire year. He notes, “You start to understand a person better when you also know their dad. And by the way, it turns out his dad is pretty amazing.” He hopes this year “helps our growth in our relationship with the Lord and how to live that out.”

By Glenda Meekins of the Florida Catholic, January 27, 2021