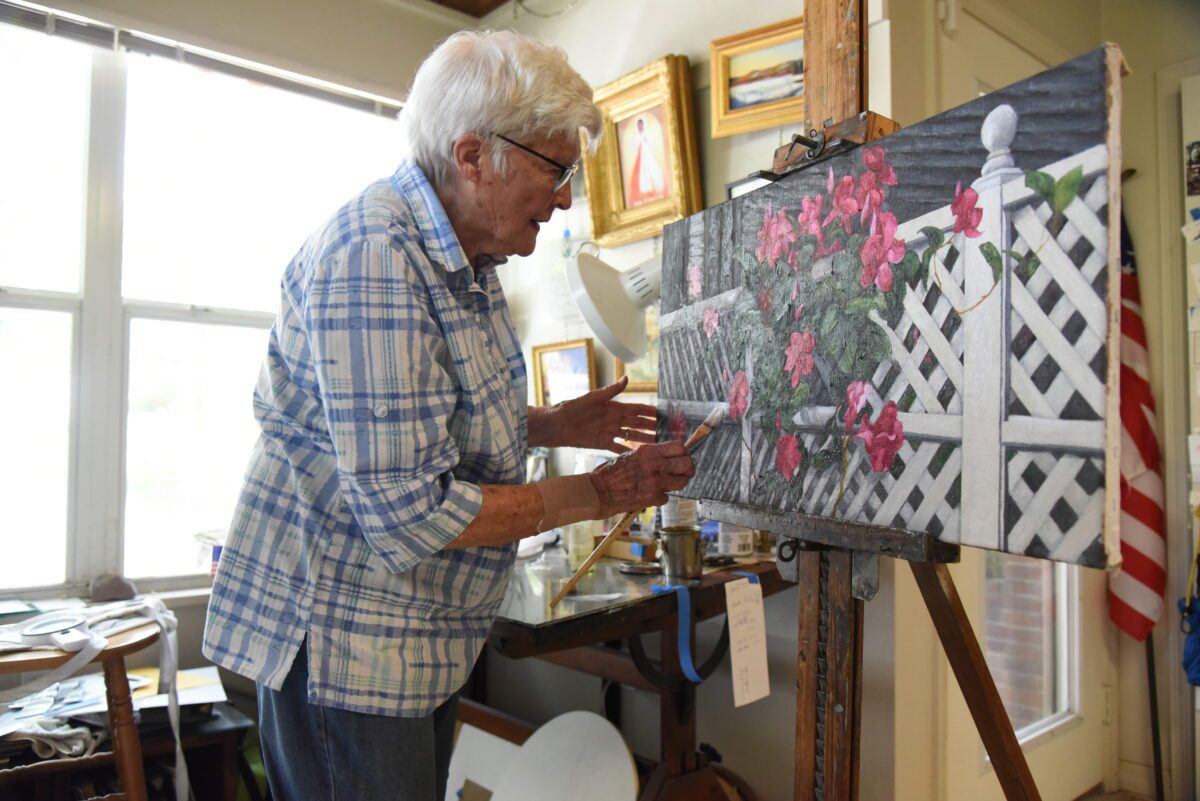 Peggy is 89 and still paints daily. Here she refines a garden scene from her neighborhood. (GLENDA MEEKINS)

OCALA   | Portable easel and paint in tow, Margaret Hill Watts rolls her cart out into the woods, searching for placid pools of water or whatever nature might offer.

The 89-year old loves her solitude. A peaceful spot in the woods while painting a landscape is quintessential. Mixing colors on her palette to get a cedar tree or the ripples of a river just right, she finds herself in tune with nature.

The octogenarian paints every day, except Sunday. Her warm smile, modest demeanor and sky-blue eyes reveal passion and delight for her craft.

The renowned Ocala artist is best known for her paintings of landmark buildings in the region and pictorial landscapes in nearby Silver Springs State Park. She chronicles an historic legacy to the city of things past and present.

Yet, perhaps her greatest works are located at Queen of Peace Parish, where she painted more than 60 scenes in oils from the Bible on canvas, metal and wood.

The church is a monument to the glory to God. Built in 1986, Father Patrick O’Doherty began implementing his artful vision to teach salvation history. He recalled the stories from his days as a seminarian, reading the Bible and exploring the masters. His photographic memory was instrumental in the vivid creations sheathing the church’s interior.

Today its walls are replete. One can follow the steps of Adam and Eve in Genesis to the Book of Revelation. In February 2022, Watts painted the final two canvases: The Road to Damascus and The Crucifixion, modeled after Michelangelo’s two final treasures of art on the ceiling of the Sistine Chapel.

Watts was not classically trained in fine art. Her skill became evident to the nuns of St. Mary Catholic School in New Jersey when she was in the fourth grade. They frequently took her out of math class, for which she had little affinity, to draw a poster or paint a mural on a roll of pink butcher paper for a backdrop of a play.

By 16, she wanted to learn how to hone her craft. Auditioning for a local teacher from Spain, Sabina González, she was required to draw a self-portrait while sitting at the teacher’s dressing table, looking at herself in the mirror. She was one of the few students accepted that year, and the only youth among adult protégées. They concentrated on painting the old masters.

“The best thing (González) did for me was she taught me how to mix color,” Watts said. “I can make any color you can think of, so I don’t have to buy 500 different shades of green.”

That experience would serve her well years later.

She moved to Florida in her early 20s where she met her husband, Bernard. They married in the original Blessed Trinity Catholic Church in Ocala, her parish, and had two children while she continued to take workshops and lessons from various artists, among them the famed Daniel Green who painted the visages of presidents and royalty.

By the time Father O’Doherty commissioned his first painting in 1994, she was ready to tackle the assignment.

Not knowing who could make his vision come to life, he called John Briggs, a local artist in residence at the state college. Asking for the best painter in town, Briggs named Watts. Later, Watts stated the same of Briggs. “Peggy” as her friends call her, “is the artist with the least ego I ever met because she didn’t paint herself into any of the paintings,” Father O’Doherty said.

For all the paintings, Father O’Doherty provided images of famous artwork, incorporating his own artful ideas interpreted in an instructional way.

The Resurrection was the first painting of its kind and size (16 feet by 9 feet) Watts had ever done. She sought the help of Briggs to teach her how to get the frame made and canvas stretched. A friend lent her a warehouse near a church so she participated in the celebration of daily Mass throughout the project, buying books to research and assist with creating accurate reproductions, and adding some personal touches like her green and red Christmas coral from Tampa Bay, which serves as the marble base of the altar.

Whether moved by a weeping Mary or the face of Jesus in The Resurrection, she credited Father O’Doherty with deepening her faith through each painting.

Her use of locals for models – a maintenance worker, chiropractor, neighbor and newborn, coffee shop owner and even a stranger – makes looking at her broad canvasses a snapshot of her community – the body of Christ.

In 2020, a man crashed into the front doors of Queen of Peace, setting it ablaze, damaging several icons and destroying The Resurrection. Because she saves everything – sketches, designs, small oil sketches and even color palettes, she was able to reproduce the piece. She gave God credit for His foresight.

Eventually, Briggs painted the largest canvasses in the church, yet Watts painted more than 60 pieces — from Stations of the Cross, icons, saints, 12 coats of arms of past popes, to the four creatures spoken of in the Book of Revelation, painted on the metal plates holding together the roof trusses — their claro oscuro shades created with gold metallic oil, achieving an other-worldly look. Her capacity to embrace diverse styles is staggering.

Coupled with her historical paintings and landscape scenes, Watts has created an historical and spiritual legacy to inspire generations to come.

As she reflects on her career, she said, “I think, I am just me. How did I get this wonderful gift to be able to do this? I don’t understand it. I can’t do that. But I did it. God did it. It’s been a lot of fun.”

By Glenda Meekins of the Florida Catholic Staff, June 30, 2022 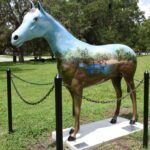 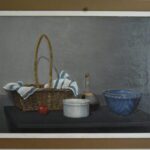 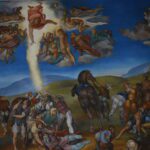 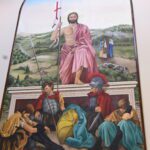 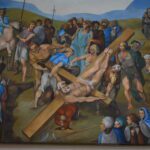 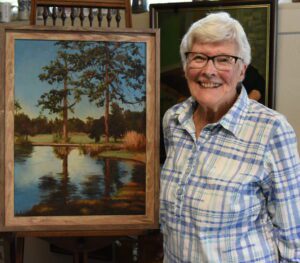