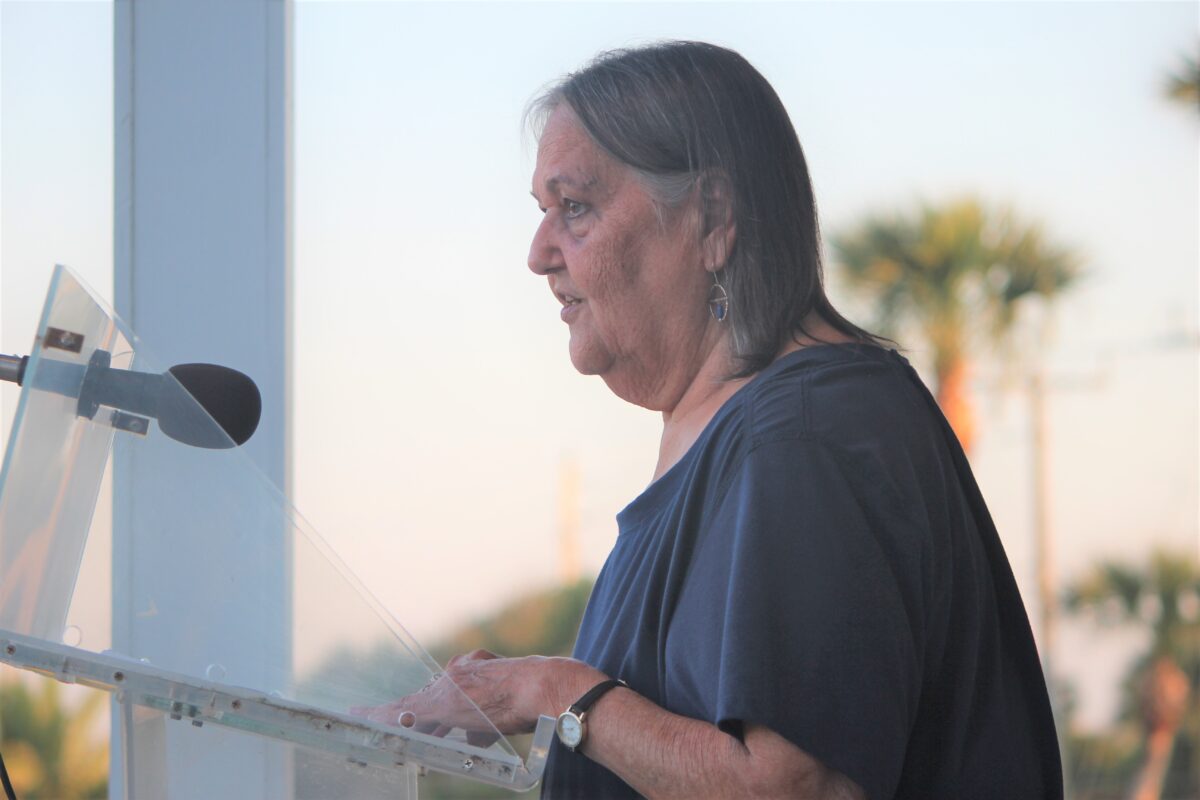 Frances Owings of Our Lady of Lourdes Parish in Daytona Beach shares her battle to find affordable housing at the March 28 F.A.I.T.H. meeting at the Daytona Beach Drive-In. (GLENDA MEEKINS)

DAYTONA BEACH | When Frances Owings, a parishioner of Our Lady of Hope Parish in Port Orange, looked for affordable housing in her area, she found an apartment along the river.

The complex had severe flooding issues during heavy rains. As residents braced for a possible hurricane in the area, the complex’s management claimed there was no flood issue with the property.

The city did not issue an evacuation order, so she stayed put. But she woke up in the middle of the night to find water just below her knees.

“I managed to escape with a few belongings. Eventually an Army truck came, and I was rescued,” she recalled. “The whole experience was traumatic.” She lost her car, clothes, and furniture. “The financial and emotional impact was long lasting,” she said.

Now she and her grandson live in an apartment in Port Orange. But it has a leaky roof, mold issues and management who won’t repair those problems. Because of their limited income, they cannot move.

Rising cost of living expenses and lack of safe, affordable housing makes Owings experience more common than an outlier. It was also one of the topics discussed during a F.A.I.T.H. (Fighting Against Injustice Toward Harmony) meeting at Daytona Beach Drive-in and via Zoom at several church locations March 28.

F.A.I.T.H. is an interfaith organization made up of 30 diverse congregations in Volusia County with a strong Catholic presence which seeks change through the support of elected officials. It is working to procure a Housing Trust Fund for Volusia County, similar to those obtained by Seminole and Orange counties. Following the example of Polk County, F.A.I.T.H. would like to start the fund with monies obtained through COVID relief funds.

Housing Trust Funds set aside money — usually issued as grants — by local governments to assist in the creation, rehabilitation, and preservation of housing that is affordable to people of a certain income bracket. F.A.I.T.H. members shared how success of local housing trust funds “is due in part to their flexibility,” such as repurposing abandoned buildings into affordable housing units.

At least four votes are needed to enable a Nexus study on linkage fees as a dedicated revenue source for the Housing Trust Fund.

Linkage fees seek to reconcile the cost of new development with the rising cost of rent. Barb Girtman, Billie Wheeler and Heather Post, F.A.I.T.H. council members, committed to that plan.

The grassroots community organization also discussed implementing civil citations and restorative practices for first time juvenile offenders of non-violent or non-serious misdemeanors. Father Christopher Hoffmann, pastor of Our Lady of the Lakes Parish in Deltona, reported progress made in increased restorative practices in schools, over in-school or out-of-school suspensions. He said, in the last two years, high school suspensions plummeted 76%, 56% in middle schools, and 67% in elementary schools according to the Volusia County School District reports mailed to F.A.I.T.H.

“We are moving away from ineffective, punitive discipline to restorative discipline practices,” Father Hoffmann said. The Florida Association of School Psychologists indicates students who are suspended are 10 times more likely to drop out.

“Restorative practices have always been less about punishment and more about relationship.”

The last topic dealt with access to mental health services for those in need as alternatives for arrests. With her children at her side, Lori Bernstein, of Epiphany Parish in Port Orange, shared how her 31-year-old son, Frankie, died last June, after struggling for years with mental health issues. At one point, police insisted on charging him and incarcerated Frankie, putting him in solitary confinement and refusing to provide him his medications for over a month.

Frankie’s parents sought help repeatedly over the years, and in March 2021 they used the Marchman Act — which allows family members to petition courts for mandatory assessment and treatment of someone abusing drugs or alcohol, and who appears to be a danger to themselves or others.

But they were denied by a judge, despite the fact Frankie had already been Baker Acted more than 30 times. Three months after this assessment was denied, Frankie lost his life to a drug laced with fentanyl.

F.A.I.T.H. is working with the Volusia County Branch Jail to ensure patients receive their prescribed medications. Father Hoffmann said F.A.I.T.H. is trying to quantify the problem with further.

“So many are suffering from substance abuse and mental health crises,” he said. “A common theme is that there are simply not enough resources in our community.”

By Glenda Meekins of the Florida Catholic Staff, March 29, 2022