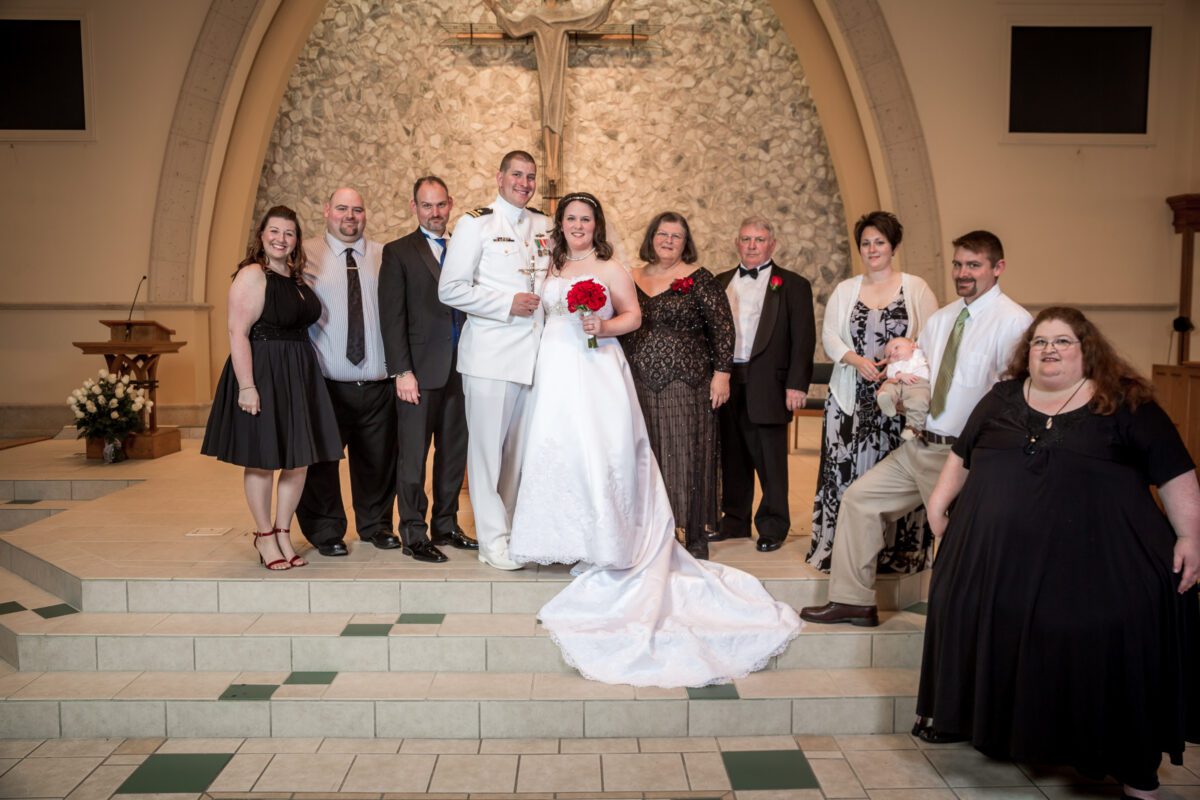 The extended Gibson family is seen in this 2015 photo during the wedding of Andrew and Marie (nee Gibson) Norris. Flanking the couple, from left, are Jennifer and Kevin Gibson, Christian Gibson, Dorothy and Daniel Gibson, Laura and Brian Gibson and Audrey Gibson. (COURTESY)

MELBOURNE | Homebound with illness for some time when the COVID pandemic hit, quarantine did not come as a shock to Audrey Gibson. The 47-year-old, former teacher at Ascension Catholic School in Melbourne, was used to it – multiple health issues often kept her homebound. Little in her life would change. In fact, it seemed for once there might be an advantage to her situation. She and her parents, devout Catholics and long-time parishioners at Our Lady of Lourdes in Melbourne and later, St. Joseph Parish in Palm Bay, clung to their faith and forged ahead.

According to her eldest brother, Christian, Audrey’s “fiery personality” accompanied her red hair and kept her parents, Dorothy and Daniel, entertained while they cared for her. As the pandemic raged outside their home, Dorothy, Daniel, and Audrey felt somewhat insulated. Daniel, a lay Carmelite and retired nurse, occasionally went out for groceries, but mostly stayed to care for his wife and daughter. Then they began feeling sick, piercing the safety bubble they built around themselves.

Dorothy recently completed chemotherapy treatments for cancer when she, Audrey, and Daniel were diagnosed with COVID. Within weeks, all three of them died. Audrey passed into eternal life in August, one week before her parents.

As their parents and Audrey became ill, the other four Gibson children stayed in touch. Christian acknowledged everyone was concerned about a negative outcome. “We were worried obviously. Something was going to eventually be the trigger that took (Audrey’s) life. We wondered if this was going to be it, but she is also tough.” There was also concern about Dorothy’s precarious health and both parents’ age.

Then Audrey entered the hospital and Dorothy followed a few days later. Daniel tried to “tough it out” at home with medication, but soon had to go to the emergency room. Daniel kept “entreating all of his kids to get right with God,” Christian recalled. “He kept saying eternity is a long time. Don’t make the mistakes I’ve made.”

When Dorothy and Daniel were sent to rehabilitation, a renewed hope arose. Dorothy was in high spirits. No one expected them to get worse.

As Audrey’s health quickly declined, her brother Kevin asked Father Scott Circe, pastor of Holy Name of Jesus in Indialantic, to confer the Sacrament of the Anointing of the Sick.

After a short time in rehabilitation, Dorothy returned to the hospital and was put on a respirator. Her texts became more urgent. She pleaded for the Eucharist. Her last text was, “Help me.”

Giving his brother a break, Christian requested the Sacraments for his mother and was told it was not possible. Over the next two days he exhausted his options. He wrote the governor, senators, and the mayor of Melbourne, and complained to the hospital. The next day he received a call from a hospital director allowing visitation and a priest to give his mother the Sacraments she so fervently desired. By then Dorothy was on a ventilator and sedated. “It was too late for her to interact with family and receive the Blessed Sacrament,” Christian said. “All I could do was stroke her head and hope she heard me.”

Salvatorian Father Octavio Trejo-Flores, parochial vicar of Our Lady of Lourdes, conferred the Sacrament of Anointing of the Sick.

“Even though the person is unconscious, some senses are still alert in the body so they can be aware. It is also effective in the family,” Father Trejo-Flores said.

He noted the Gospel of Mark, where Jesus grants authority to the apostles to heal the sick and anoint with oil. “James also says the sick should call the presbyters to receive anointing invoking our Lord, indicating this is a power that comes from God. If Jesus gives this power to the apostles, then it means the Sacrament instituted by Him also extends to the apostles of His church, the priests,” he said.

Father Trejo-Flores did the same for Daniel who was now in the emergency room. He could see the relief on Daniel’s face. Both Dorothy and Daniel died the same day.

“I’m not worried about any of those three souls,” Christian said confidently. “Most of that for me is helping poor, dying people have an easier journey onto the next part. I know God is all merciful.”

Realizing now the various protocols of hospitals for health and safety during the pandemic and that these protocols can change daily, Christian urges others to immediately avail themselves of the policies and seek visitation and religious services for loved ones early on.

This is the advocation of the Church; that the Sacraments are offered while the individuals can participate and that family can also be present. As stated in the Catechism of the Catholic Church 1499: “By the sacred anointing of the sick and the prayer of her priests, the whole Church commends those who are ill to the suffering and glorified Lord, asking that He may lighten their suffering and save them (cf. James 5:14-16). She exhorts them, moreover, to contribute to the welfare of the whole People of God by associating themselves freely with the passion and death of Christ (cf. Rom. 8:17; Col. 1:24; 2 Tim. 2:11-12; 1 Pt. 4:13).”

Acknowledging the uniqueness of a pandemic, he said, “If it wasn’t COVID, we probably would have all been there.” He is grateful to the priests in administering the Sacraments and for visiting his family members, even for a short time.

By Glenda Meekins of the Florida Catholic, September 22, 2021