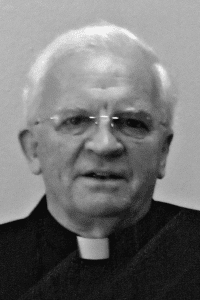 Father Anthony Quinlivan was born Jan. 19, 1940 in Cork, Ireland. At the age of 25, he joined the Congregation of the Most Holy Redeemer, commonly known as the Redemptorist Order. He completed his studies in England and was ordained June 29, 1971. Following Ordination, he studied at London University and the London School of Counseling and Therapy where he earned post-graduate degrees in education and counseling. These degrees served him well as he would spend the next several years as a high school teacher and lecturer at an international study center for priests and religious. He would then serve as an associate pastor for parish communities throughout England before arriving in the Diocese of Orlando in 1995. He began his ministry in the United States as parochial vicar of Ascension Parish in Melbourne and then became pastor of Blessed Sacrament Parish in Cocoa, where he would serve until his retirement in 2016.