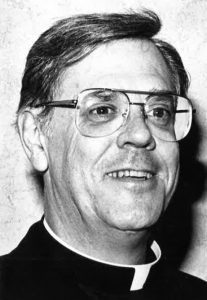 Father John Ryan was born in Newark, NJ in 1941. Following studies at the University of Colorado, Father Ryan entered St. Mary Seminary in Baltimore, MD and completed his studies at Immaculate Conception Seminary in Darlington, NJ. He was ordained to the priesthood on April 23, 1971. He arrived in Florida four years after his Ordination, serving as parochial vicar at St. Mary Magdalen Parish in Altamonte Springs, the Basilica of St. Paul in Daytona Beach, Ascension Parish in Melbourne, and as pastor of St. Patrick Parish in Mount Dora and St. Brendan Parish in Ormond Beach. He would serve as pastor of St. Brendan’s for 16 years, until his retirement on 2011. Highlights of his priestly ministry include serving as the dean of the Northern Deanery from 1989-1999, serving on the Retirement Committee for Priests, strengthening interfaith relationships with the local synagogue in Ormond Beach, hosting the relics of St. Faustina Kowalski for veneration and offering the opening prayer at the 108th Congress at the Capitol in 2000.