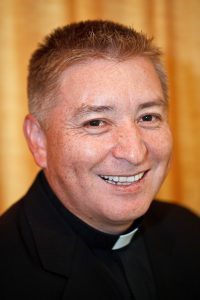 Everyone in Ventaquemada, the small Colombian town where Father Jose Muñoz grew up, was Catholic, including his parents, Patrocinio and Florentina, and his three older sisters. Although he was raised Catholic, by the time he was a teenager, Father Muñoz was not attending church regularly. One day, at the age of 17, he decided he would attend a novena Mass and that decision was so life-changing that he still remembers the exact date over 35 years later: Dec. 15, 1985.

“The homily at that Mass was so incredible. I became friends with the priest who presided and began accompanying him to visit the sick, to Masses he celebrated in rural areas and much more,” recalled Father Muñoz. “Something that impressed me was that he was really happy, and I wanted to be happy just the way he was, so six months later I told him that I wanted to be a priest.”

Father Muñoz entered the Major Seminary of Tunja in Tunja, Colombia, where he studied philosophy and theology. While in school, he was a soccer player with an amateur league. In 1992, he applied to the Diocese of Orlando and completed his schooling at St. Vincent de Paul Regional Seminary in Boynton Beach followed by St. John Vianney College Seminary in Miami. He was ordained June 1, 1996 at St. James Cathedral in Orlando.

“One of the first moments I will never forget is from my Ordination, when I was prostrated, I could feel the Holy Spirit dwelling within me,” remembered Father Muñoz. “And when I felt the bishop imposing his hands on me and anointing my hands with oil, that changed my entire life.”

Father Muñoz has served as parochial vicar of St. Mary Magdalen Parish in Altamonte Springs, the Basilica of St. Paul in Daytona Beach, St. John Vianney Parish in Orlando and since 2006 he has been pastor of St. Isaac Jogues Parish in Orlando. In all of these communities, he counts it as a great blessing to be able to help people encounter the Lord – including his own parents and one of his sisters, each of whom he was able to anoint before their passing and celebrate their funeral Masses.

“This to me was an honor regardless of the pain I was going through. I felt the joy that the Lord gave me through this ministry,” recalled Father Muñoz. “As a priest, I am able to walk with the people through the most transcendent moments in their lives… happy parents at Baptisms, people cleansed of their sins in the Sacrament of Reconciliation, and weddings where there is so much love. I enjoy walking with people in their faith.”