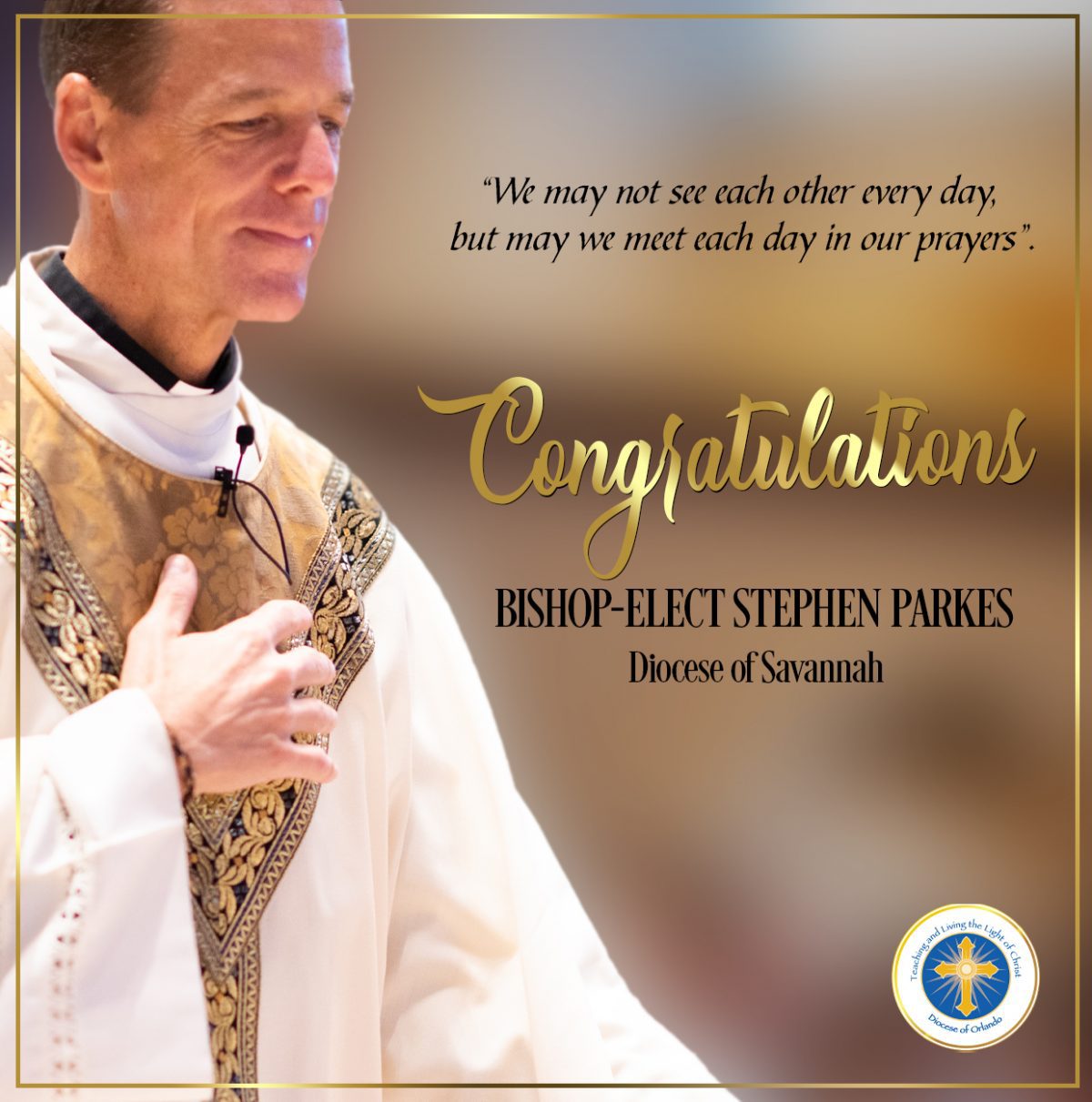 SAVANNAH | No one likes cold eggs, but on Thursday morning, July 2, Father Stephen Parkes’ breakfast would have to wait. The pastor of Annunciation Parish in Altamonte Springs had just embarked on a 31-mile bike ride, something he would do weekly. He generally used that time to pray the mysteries of the rosary, and since it was a Thursday, he began the luminous mysteries. But something also inspired him to pray the joyful mysteries as well. When he returned to the rectory, he prepared breakfast and just before enjoying it, he received a phone call. 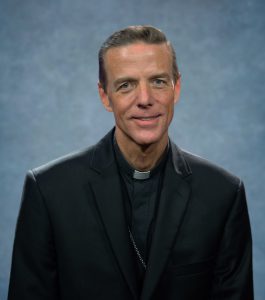 But it was not just any phone call. It was from the Archbishop Christophe Pierre, apostolic nuncio to the United States, and the subject of the call would change the life of the priest who has served the Orlando Diocese in Florida for 22 years. He was informed that Pope Francis appointed him as the 15th bishop of the Diocese of Savannah in Georgia.

“Needless to say, I was very surprised, and, as you can imagine, my mind went blank for a few moments,” the 55-year old said. “I was very glad I prayed those extra mysteries on my bike ride. I’m humbled by the confidence the Holy Father has in me to be the next shepherd of the beautiful Diocese of Savannah.”

I am grateful for decades of the seeds of the Catholic faith that have planted here in the 90 counties of the diocese,” Bishop-Elect Parkes said in a small press conference July 8, 2020, in Savannah. “Together, may we have the grace and vision to continue to tend and nurture these seeds of faith and plant new ones as missionary disciples for years to come.”

During the conference, which was livestreamed on the diocese’s website, along with its main and Hispanic Ministry Facebook page, Bishop-Elect Parkes spoke to the faithful in both English and Spanish, and requested, with a humble smile, patience with his ability to speak Spanish. Along with learning Spanish in high school in New York and at the University of South Florida in Tampa, where he graduated with a bachelor’s degree in marketing, Bishop-Elect Parkes learned Spanish through an immersion course he took years ago in Costa Rica, as well as during Mass celebrated in Spanish at St. Vincent de Paul Regional Seminary, which he attended in Boynton Beach. He described learning Spanish while celebrating Mass and reading the missal in Spanish as a “very beautiful and comforting way to learn a language.” 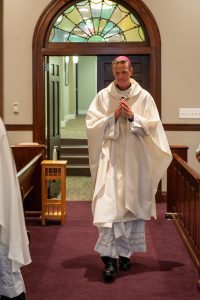 Ordained for the Diocese of Orlando in 1998, Bishop-Elect Parkes said his past 22 years of priesthood has made him realize his “deep love of parish ministry” and said he is blessed in experience in campus ministry at the University of Central Florida in Orlando and his parish assignments of Annunciation and Most Precious Blood in Oviedo, where he was tapped as founding pastor in 2005.  He said he is grateful for his priestly mentors in the diocese and the people he has served.

“They taught me not only about ministry, but I have learned from them the inexhaustible nature and presence of God’s love, of His goodness and of His mercy,” he said, welcoming those who watched the conference online. “We are living in extraordinary times as we face a pandemic and recent social unrest. For all of us, now more than ever, we need hope and healing, and we need recognition of God’s image that is in the life of every human person.”

In the past few months, Bishop-Elect Parkes said he has especially reflected on the words of St. Paul from Romans chapter 12, verse 12: Endure in affliction. Persevere in prayer.

“Today, I ask you to please pray for me,” he said, as he held back tears and took a moment, “that I can be the shepherd that God has called me to be and that you need and deserve. I also make my commitment to pray for you, your loved ones and your intentions. We may not see each other each day, but, my friends, may we meet each day in our prayers.”

After his comments, Bishop-Elect Parkes took questions from those present, the first question relating to his height. At six feet, four inches, it might seem natural to ask whether the priest is an avid basketball player. Sporting a smile, he answered, “Just because someone is tall doesn’t mean you’re always good at basketball.” It was a question also fielded many times by his brother. Like Bishop-Emeritus John Boland, 13th bishop of Savannah, who was present at the news conference, Bishop-Elect Parkes shares a priestly bond — and soon a bishop bond — with his brother, Bishop Gregory L. Parkes of St. Petersburg. At six feet, eight inches, Bishop Gregory Parkes is four inches taller than his younger brother, and the tallest prelate in the United States. He said “I always looked up to him,” both in example and physical stature. 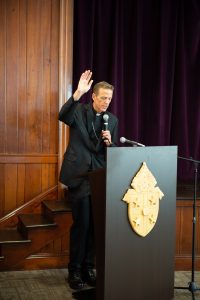 “My parents were dedicated to our Catholic faith and provided a beautiful example of family life to their sons,” said the priest. Born in Mineola, New York, June 2, 1965, he is the youngest of three boys to Joan and Ron Parkes. His brother, Christopher, died in 2017. Like Bishop Gregory Parkes, his journey to the priesthood did not begin until after college and life in the workplace. In a 1995 interview with the Florida Catholic, he said he envisioned himself as a husband and father until he went on a “Come and See” weekend and the seed for priestly vocation was planted.

“I heard there that a true vocation doesn’t go away,” he said. “You might ignore it for a while, but if it’s meant to be, the idea keeps coming back.”

During his press conference in Savannah, Bishop-Elect Parkes asked whether his appointment as bishop displays confidence in his ability to shepherd. Taking a beat before answering, Bishop-Elect Parkes remarked the appointment, which was still less than a week old, is somewhat overwhelming. While he will learn on the job the tasks of his office, he hopes to do a lot of traveling to meet and celebrate with as many priests, religious and laity as possible. With 37,000 square miles, spanning a driving distance of six hours to the most southwest corner of the diocese, he realizes it might be a lot of driving. But he looks forward to that task in order to pass along the faith.

“We as Catholics have good news to share. It was brought to us in the beginning. The Good News is the presence of Christ. The Good News is the Lord being born into our world over 2,000 years ago, and walking this earth,” he said. “And I think to be able to bring that as the bishop of this diocese is something very exciting and very humbling, but something I know the Lord will help me do as well.” 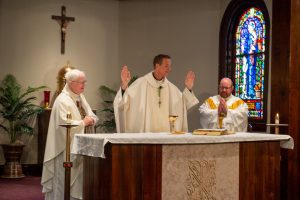 Through “wonderful and sometimes scary” moments prayer, he said he will continue to look for guidance and realize that God is always in charge.

“It is a new place to live and many new people to get to know, but one thing is always the same. And that is Jesus Christ. Our faith in Christ brings us through whatever we face and whatever He asks of us,” he said.

When established in 1850, the Diocese of Savannah had included southern Georgia and portions of Florida — including Central Florida where Bishop-Elect Parkes called home for the past 37 years. He remarked how he has also gotten to know his predecessor Bishop Gregory Hartmayer, OFM Conv., who served as 14th bishop of Savannah until his appointment as Archbishop of Atlanta March 5, 2020. He and Bishop-Elect Parkes served on the board of trustees for St. Vincent de Paul Regional Seminary in Boynton Beach. Bishop-Elect Parkes thanked Bishop Hartmayer for his “fine leadership,” and asked the faithful of Savannah to remember the bishop as he assumes his new responsibilities in Atlanta.

Bishop-Elect Parkes is scheduled to be Ordained and installed as bishop of Savannah on Sept. 23, the memorial of St. Padre Pio.

By Jean Gonzalez of the Florida Catholic, July 8, 2020