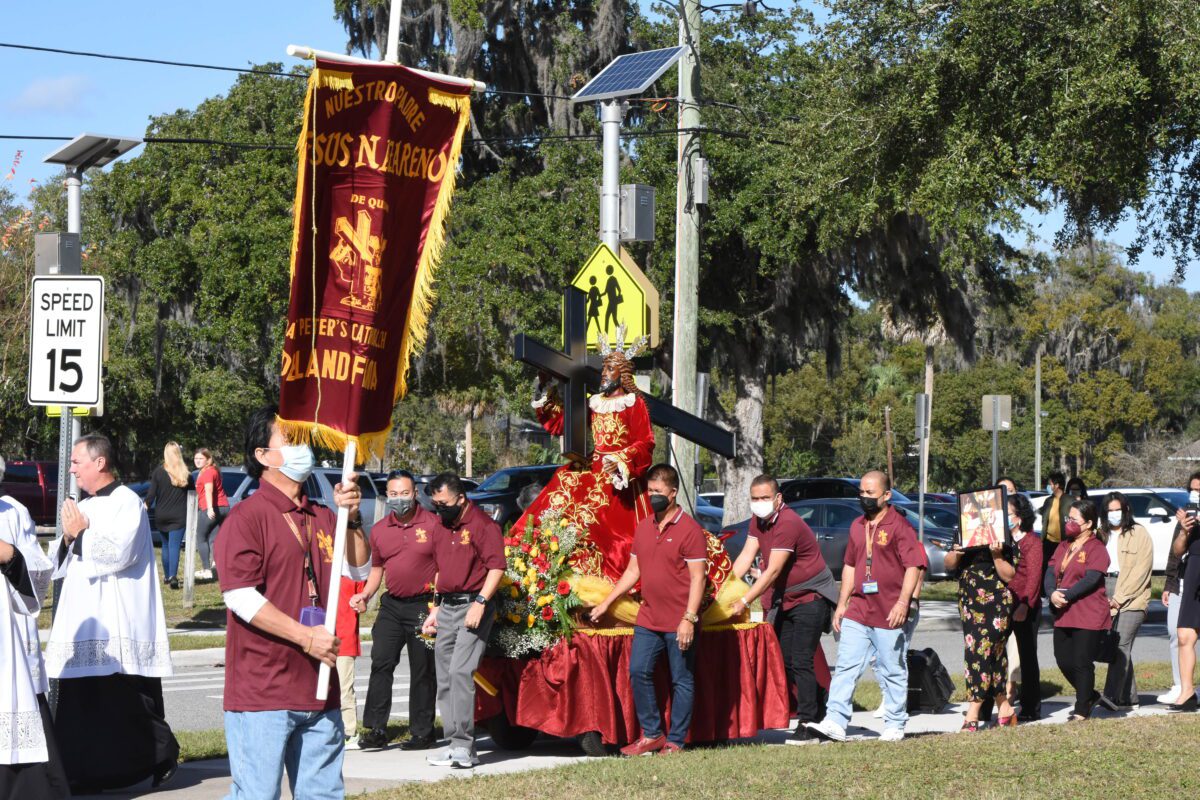 arishioners and the Filipino community of the Diocese of Orlando celebrate the Traslación or sacred transfer of Jesus, The Black Nazarene, at St. Peter Parish, DeLand. The commemorated transfer from Intramuros to Quiapo Church or Minor Basilica of the Black Nazarene in Manila, Philippines, occurred Jan. 9, 1787. (GLENDA MEEKINS)

DELAND | St. Peter Parish filled with music as the Diocesan Filipino Choir sang while parishioners and Filipinos from throughout the diocese and beyond poured into the church to honor Nuestro Señor Jesús Nazareno (Jesus the Black Nazarene). A procession from nearby St. John Bosco Hall approached St. Peter as the bells rang out, as if announcing the large statue’s arrival at the church doors.

The Feast of the Black Nazarene, commemorating the Traslación, or solemn transfer of the statue from Intramuros to the

Minor Basilica of the Black Nazarene (Quiapo Church) in Manila is among the largest in the Philippines, bringing forth more than one million devotees. For the second year in a row, the country cancelled the procession and celebrations due to the pandemic.

Romy Cortez, who brought the replica of the Nazarene to St. Peter in 2017 as a gift, was grateful his community could bring the event to fruition in DeLand. He became emotional speaking of the “miraculous statue”. He believes the Nazarene healed his own daughter, Marites, who almost died within six months of her birth after being born premature. He remembers travelling to Quiapo and praying for his daughter’s healing. She is now 46 years old. He also credits the Nazarene with expediting his family’s move to the U.S.

“We are blessed,” he said. The night prior, he prayed, “Jesus, heal the world. Protect the people coming here.” Placing his hand on his heart, he added, “Our faith is still here.”

The day began with many praying the rosary on the final day of the novena, some in traditional dress, to express their devotion.

Father Kenny Aquino, pastor of Divine Mercy Parish in Merritt Island and Filipino Ministry liaison said the celebration also marks the arrival of Christianity to the Philippines 500 years ago. “We promote the devotion to Our Padre Jesús Nazareno as a motivation for us Filipinos living outside the country to become the evangelizers of others,” he said. Reflecting on how the faith arrived in the Philippines, brought by the Augustinian Recollect fathers, he sees “a shift on the laity becoming the evangelizers.” He said, “Lay missionaries is the calling. We once received the faith and now we share the faith with others.” In his homily on the Baptism of the Lord, he reminded those present of their baptismal mission to be priest, prophet, and king, enabled through the help of the Trinity.

“As Jesus carried the cross, there will be a lot of challenges along the way, but during those challenges, we will never carry them by ourselves, but with Jesus always,” he said. “It becomes a challenge that is lighter because we are promoting God, manifesting God to the world.”

Mae Thompson helped coordinate the event and said she hopes the procession introduces Jesus the Black Nazarene to the community.

Ariel Bermuda brought his wife and children as he has since 2017. “[The Black Nazarene] is part of the family. It gives us inspiration and makes us unite and bind as a family,” he said. He desires to carry on the devotion to his children. “I want them to grow and learn what I did from my parents.”

Susan Cabusi, a parishioner from Our Lady of the Lakes in Deltona came to help decorate the carroza or carriage with flowers and fabric. She recalled how her father taught her about the image since she was young, even giving her a small replica “to carry [her] from the Philippines to here.” Her father has since passed, but each Jan. 9 she remembers him by venerating the Nazarene.

After Mass, many clamored to try and touch the statue and be photographed with the image.

The original statue, carved from mesquite wood by an anonymous Mexican sculptor, was brought to the Philippines in 1606 by the Augustinian Recollect missionary priests. The image of Jesus, kneeling and carrying the cross evokes prayer, praise and a shared understanding of suffering. The image was first enshrined in St. John the Baptist Church in Luneta, then moved to Intramuros two years later. Jan. 9, 1787 it was transferred to Quiapo. The statue was partially destroyed during the liberation of Manila in 1945, during World War II. The Archdiocese of Manila later commissioned an artist to sculpt a replica, using the original head.

In the Philippines, the Black Nazarene is brought out three times per year – New Year’s day to begin a novena leading to Jan. 9, commemorating the Traslación and Good Friday, its proper liturgical feast day remembering Jesus carrying the cross up to Golgotha.

By Glenda Meekins of the Florida Catholic Staff, January 13, 2022