Fighting the good fight against abortion 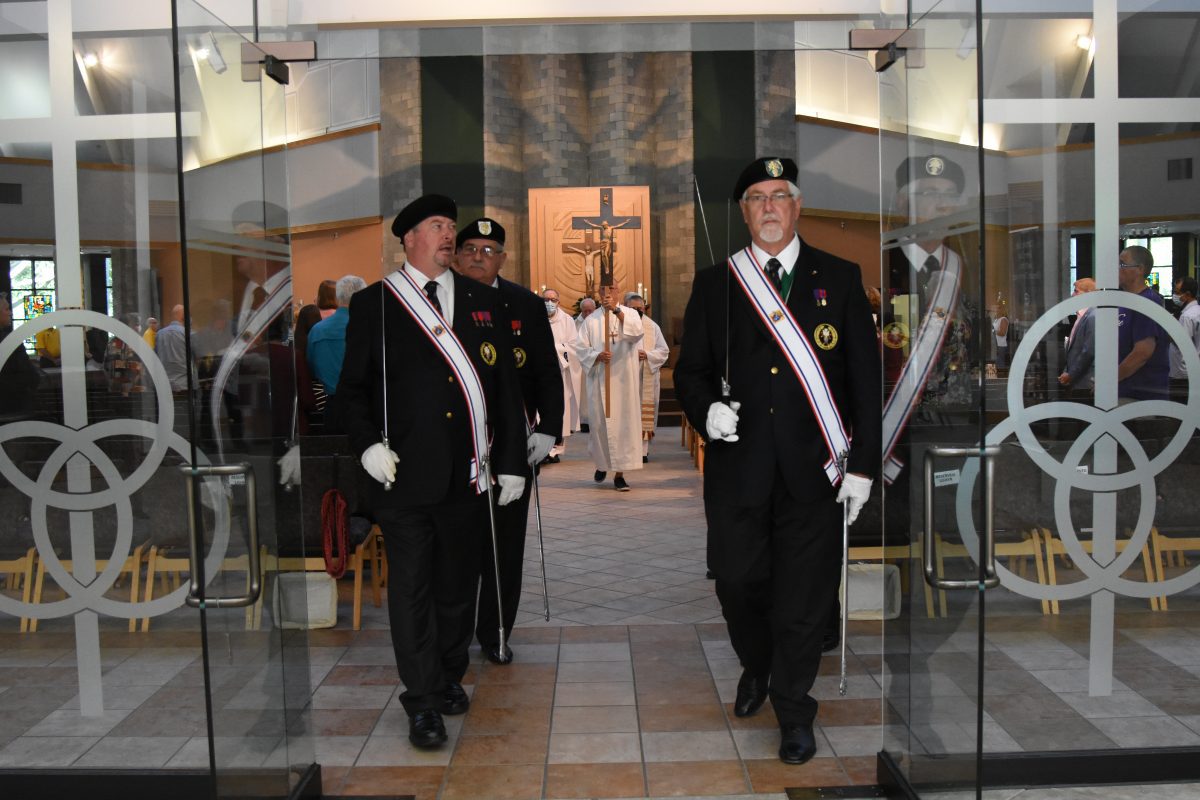 Knights of Columbus lead a procession from Blessed Trinity Parish, Orlando to the statue of Jesus holding a baby on the Day of Remembrance, September 10, 2022. (GLENDA MEEKINS)

ORLANDO | When she was 19 years old, Chloé Battle found herself confronting a decision that would change her life. Standing in front of Planned Parenthood in Indianapolis, IN, she went in and terminated her pregnancy. She had twins she later named Michael and Benedict.

The JMJ Pregnancy Center director and convert to Catholicism now counsels other women embroiled in turmoil, deciding
whether to embrace life or end it. In her address to participants on September 10, at the Day of Remembrance Mass at Blessed Trinity Parish, Orlando, she explained she does so because, “Although it’s been 21 years, the pain never goes away,” she said. “All of those pains remain, and they are stark remembrances.”

Appealing to those present, she implored their help in advocating life in the face of “abortion tourism”, the new term representing states like Florida, where women can still terminate a pregnancy up to 15 weeks. She called advocacy a civic and moral duty. It is part of the reason she works at JMJ.

“Abortion has real consequences. Abortion is physical; it’s emotional; it’s psychological; and it is spiritual,” she said. “Even one abortion can create an aftershock, like an earthquake. It ripples out with unfathomable effects.”

She recalled her mother picking her up at Planned Parenthood after the abortion. She told her, “It’s okay”. But Battle was not okay. Instead, she counts herself as a statistic, part of the 1% of women for whom the experience of an abortion leaves them unable to get married and have children—even though postabortive healing is her specialty.

Her decision has plagued her for two decades. Last year, on the 20th anniversary of the death of her sons, she chose to participate in a Rachel’s Vineyard retreat, a weekend spent focused on post-abortive healing. It helped her find peace.

Today, she often finds herself telling women who walk into JMJ “my body, my choice” is wrong thinking. There are at least two distinct human beings in a pregnancy – “with their own identity, their own structure, their own dignity, and value. They are separate and distinct, made by God. The woman is made by God and the child is made by God,” giving that baby a right to life.

She embraces these women and welcomes them into a family— that of Jesus, Mary, and Joseph, the namesakes for the acronym JMJ.

This holy family will support them; walk with them; and show them how to navigate the waters ahead. She greets them “in their messiness”, noting we are all broken.

In the wake of the historic Dobbs v Jackson Women’s Health Organization decision, she emphasized one cannot simply “champion life”, then pretend once a baby is born, everything is going to be okay. She stressed the importance of accompaniment. “We have to show them how to do it,” she said.

She finds joy when she sees women getting ultrasounds that reveal “truth and safety”. “They finally see what everyone else told them didn’t exist because—they’re a clump of cells, or it’s not a human being or it’s too early so it doesn’t matter,” she said. If it doesn’t matter, she asked why do 9 out of 10 women receiving an ultrasound change their minds?

“Once you see truth, you can’t unsee it. You cannot unsee a baby, unhear a heartbeat,” she said.

She often wonders, what if she had made a different decision that day? “What if I had been able to know what Michael and Benedict looked like? What they smelled like, kissed them, wondered what they were good at, saw them grow up, get married and have children?” She urges others to “be the woman (she) couldn’t be.”

Blessed Trinity parishioner, Clemencia D. participated in the Mass with her three young
children. She wanted them, especially her 10-year-old daughter, Annelise, to learn what it means to be pro-life and what happens when people are not informed. “I wanted her to hear (Chloé Battle’s) testimony and embrace it—to
see the miracle of life. As women, God has given us that blessing, just as the Blessed Mother carried Jesus.”

“I thought it was a great experience for me because, when I get older, I can tell my friends and tell myself that it’s not okay to do that,” Annelise said.

Following the Mass, those gathered processed to the “I will never forget” statue which memorializes the more than 60 million victims of abortion since Roe v Wade. Each laid a flower in baskets flanking the statue of Jesus holding an infant in his arms.

LaSalette Father Roland Nadeau closed saying, “We confided the souls of those millions of aborted babies to God’s mercy. We believe that Jesus is the Lord of life. He is also the Lord of death… In His wisdom and the power of the Holy Spirit, we hope and pray that the end of abortion continue, and that effective help be offered to the women that rely on this intervention for their sustenance.”

By Glenda Meekins of the Florida Catholic staff, September 14, 2022