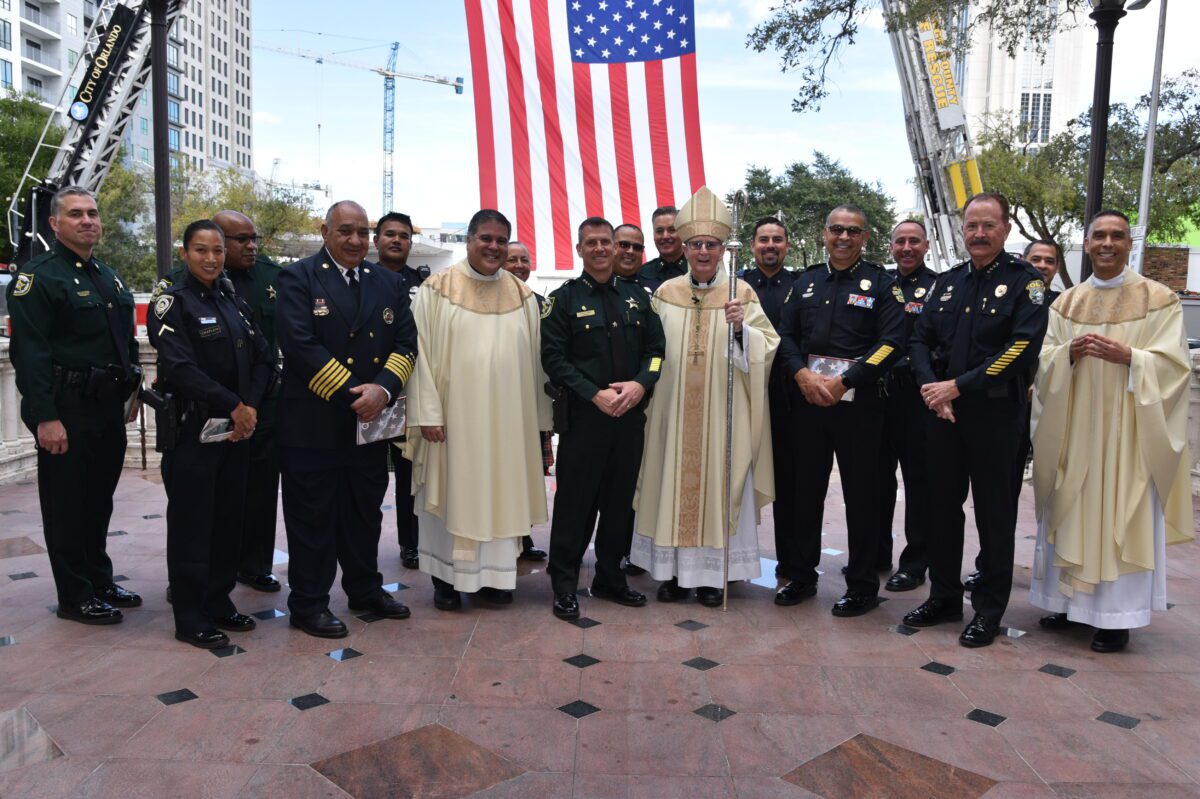 Father Marchese shared the story of Father Emil Kapaun, a priest who served as a U.S. Army chaplain during World War II. The farm boy from Kansas was “a simple man”. To earn the respect of soldiers, he worked alongside them, even digging trenches if needed. When they later learned he was a chaplain, they were surprised.

Father Kapaun became a prisoner of war during the Battle of Unsan in Korea. Although offered opportunities to escape, he refused saying, “My place is here with the wounded.” Father Marchese explained, “For days he jumped from foxhole to foxhole, dodging a barrage of bullets, to anoint the sick; to hear confessions of the dying; to offer a word of comfort to the soldiers.”

He even saved a wounded soldier, carrying him 70 miles to a POW camp. The man eventually survived the camp, which ultimately took Father Kapaun’s life. Comparing the chaplain to first responders, and all who work to preserve life in the line of duty, he noted, “(Father Kapaun) was extraordinary in his ordinariness.”

Father Marchese added, “Look at all he was able to do because he answered the call the Lord put on his heart and he did what he was supposed to do.

“In the same way, our police and firefighters have answered that call – to lay down your lives for a very particular purpose.” On this day, Father Kapaun’s remains were finally laid to rest in Kansas after years of being lost.

Police and firefighters also honored those who died in the line of duty this year by bringing up scrolls filled with names of deceased police officers, sheriffs and firefighters.

Sept. 29 is the feast day of the Archangels Rafael, Gabriel, and Michael. Father Marchese noted, “St. Rafael is known as the Remedy of God for his gift of healing which firefighters do on a regular basis and for our police, they bring healing into our community. We think of St. Michael as the warrior, but the truth is he is ‘Dios de los Ejercitos’, God of the Armies.” As an Army chaplain himself, Father Marchese noted God’s armies are His angels. “St. Gabriel is the strength of God, bringing that strength through the Annunciation…that we are called to proclaim that Good News… And St. Michael was filled with humility. It was his humility that gave him strength.” He said this virtue is an essential ingredient in serving others. “It is your call,” he told those gathered.

Bringing up the gifts of bread and wine to be consecrated as the body and blood of Christ, were St. Cloud Police Chief Peter Gauntlett and his wife, Margaret. Chief Gauntlett will retire in December after 41 years of service. A parishioner of St. Margaret Mary Parish in Winter Park, the chief was an integral part of the coordination of the Blue Mass for many years.

Reflecting on his career, he noted he could not have responded to that vocation without strong faith. “The service to the community is something that brings pride to any police officer. The ability to make a difference in helping the young people, protecting our citizens, and solving criminal matters is the primary mission of any law enforcement agency.” He added, “Faith has to be the foundation of where we are in life,” he said. “Without my faith and my belief in God and relationship with the Church, where would I be? I guess that is the question anyone should ask themselves.”

He plans to continue serving as an Extraordinary Minister of Holy Communion with his wife and hopes to serve the Church in a greater capacity once retired.

Concluding, Bishop John Noonan blessed first responders asking that God, “Grant them courage when they are afraid; wisdom when they must make quick decisions; strength when they are weary; and compassion in all their work. When they are called to aid a friend or stranger, let them faithfully serve you and their neighbor.”

By Glenda Meekins of the Florida Catholic, September 29, 2021