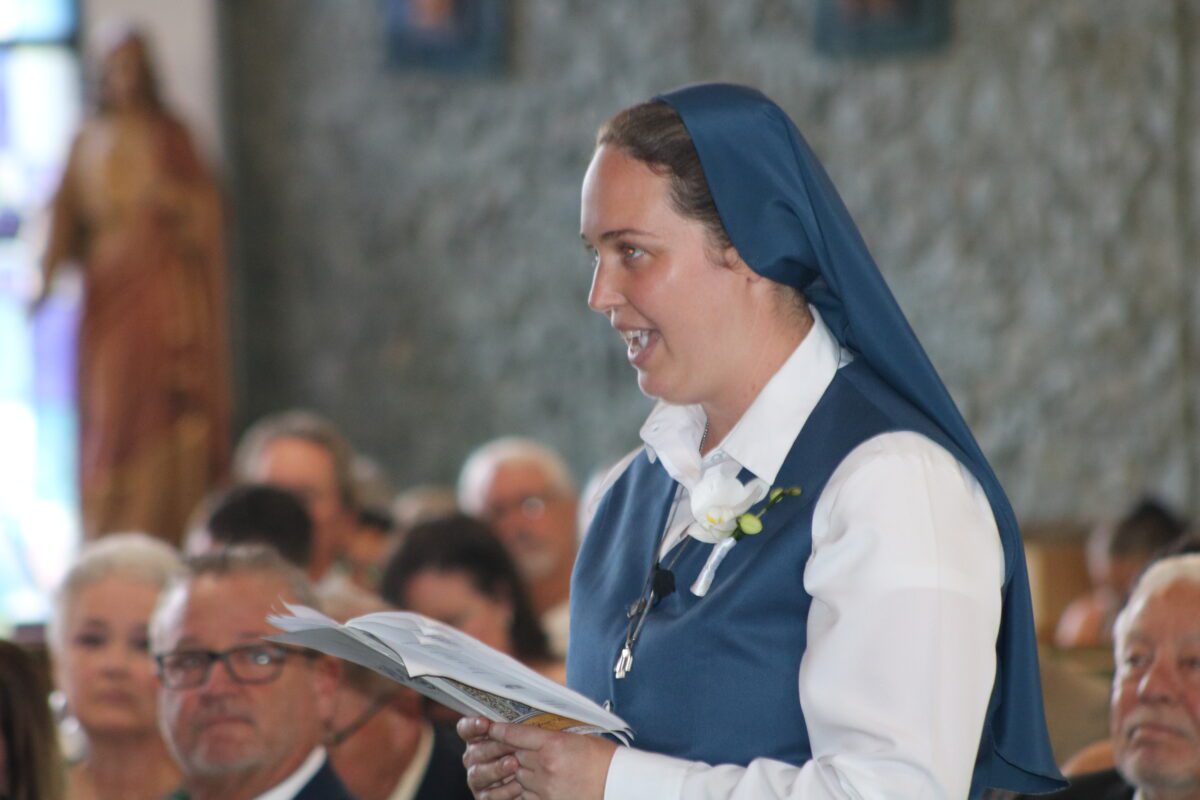 Candidate Sister Carly Paula Arcella is called during the rite of religious profession to the Daughters of St. Paul. Upon hearing her name she replies, “Here I am Lord.” (LINDA REEVES | FC)

LIGHTHOUSE POINT | Sister Carly Paula Arcella graduated from the University of Central Florida in 2011. Many of the friends she made at Catholic Campus Ministry are still friends and supporters of her faith journey today. And a group of them accompanied her during her Perpetual Profession of Vows to the Daughters of St. Paul, July 17, 2022 at St. Paul the Apostle Parish in Lighthouse Point.

“My CCM UCF family became my community after first stumbling into a Tuesday Mass and Meal one of the first evenings of my freshman year,” she recalled. “I received so many graces during that time, I feel I am still unpacking them now.”

Sister Arcella recevied her profession at the same parish where she was baptized. She grew up participating in the celebration of Mass with her family, and attended Cardinal Gibbons Catholic High School in Fort Lauderdale. She recalled “a phase of doubt and uncertainty” during those first years.” “I continued showing up to Mass with my family, after I got a car in high school, mostly to go to breakfast with them afterwards,” she said.

Then a moment of encounter changed everything. Sitting in the pew one day, she found herself specifically asking Jesus if He was truly present in the Eucharist “because everyone seemed so bored and were attending like zombies,” she recalled. When she went to Communion that day, “not just out of cultural routine, but with a real seeking heart,” she felt He gave her a special grace. Now believing in His presence, she sought out participation in the parish youth group.

It was in Eucharistic Adoration where she first encountered Christ’s love for her. She attended because the guy she had a crush on invited her “but Jesus had other plans,” she said. “Once I knew His Love for me — even at 16, on this retreat — His love was irresistible. I started to take steps and began asking many questions of my high school teachers what totally offering of my
life (to God) might look like.”

Not knowing many religious at the time, she discerned learning more about them, visiting some communities, and listening for God’s promptings. The first convent she visited was that of the Daughters of St. Paul in Miami. Moved by their handwritten request for her to visit and their mission of communicating Christ like St. Paul, in today’s world, she visited again and again. Throughout college she did “live ins,” living alongside the sisters for a week or two and visited their motherhouse in Boston.

“That first tug of unique spirituality rooted in St. Paul, Eucharistic Adoration, evangelization using the media, and the aspect of our spirituality of making reparation for the evil and confusion, also caused by the media, made a deep impact that resounded deeply within me,” she said.

At that time, Catholic Campus Ministry in Orlando was, creating “a community of friends” who prepared for Mass together, then went out to dinner. She became hospitality chair then “secret chair,” one who offered intercessory prayer at a Holy Hour during board meetings. She led Bible studies, directed Stations of the Cross, helped organize retreats and lived at the Marian Lodge, a women’s house.

In the women’s group she met “friends for life” as they disclosed ups and downs, studied and shared Church resources.

“That was my first real introduction to actually reading and discussing together sections of the catechism, encyclicals and other good Catholic reading,” she said. “I think by far what rooted me deeper in my relationship with the Lord was a community that not only walked together in the struggles of college life, but also prayed together – whether
it was Mass and Meal, times of praise and worship with Adoration, or retreat. I always felt so
supported in my walk with the Lord wherever that would lead me.”

After four years discerning the Pauline mission, she entered immediately upon graduation. Among those supporting her at UCF was then seminarian, Father Benjamin Lehnertz, now parochial administrator of St. Joseph Parish in Orlando.

“She is a terrific fit for her order, and they are blessed to have her amongst their number,” said Father Lehnertz. “To see her, after all these years, make her final profession of vows of poverty, chastity, and obedience was such an inspiring witness.”

By Glenda Meekins of the Florida Catholic staff, July 22, 2022