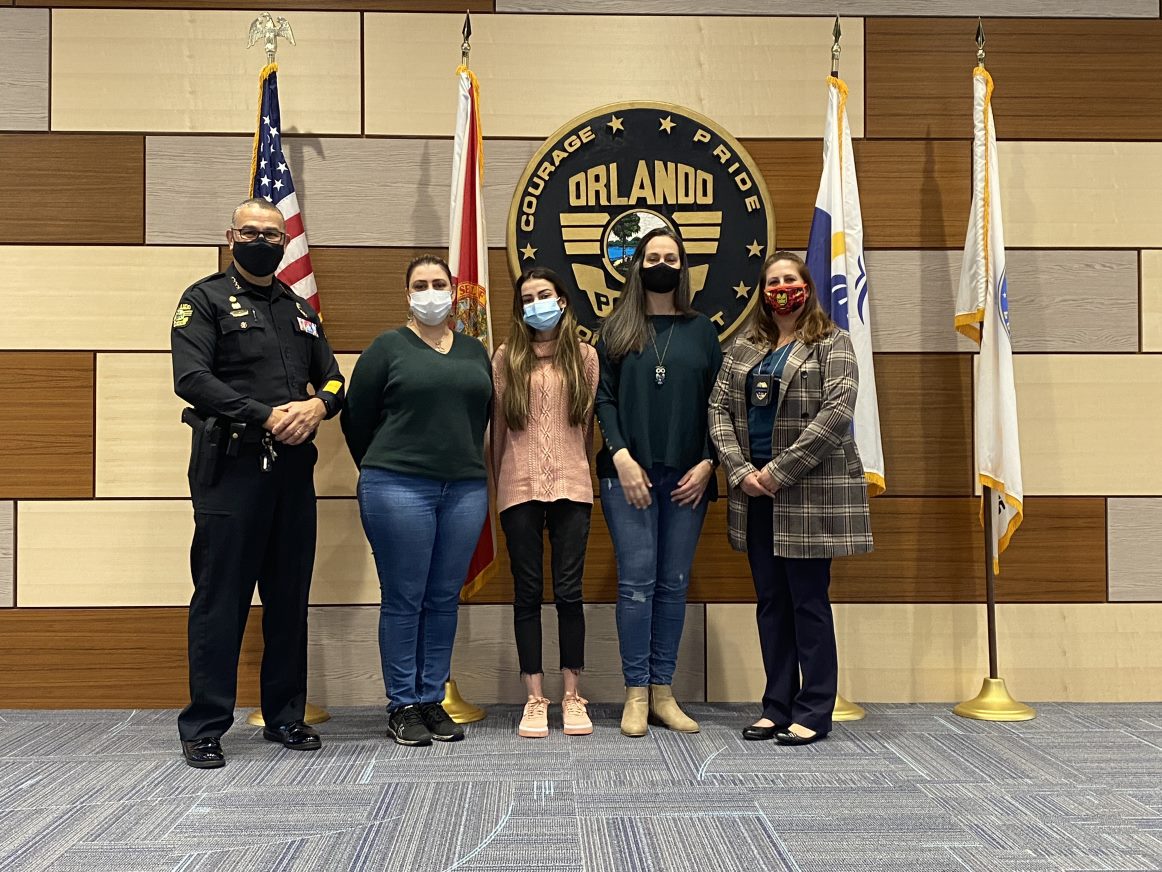 ORLANDO | A waitress with a keen eye and huge heart is being hailed Orlando’s newest hero for saving two of God’s little ones. When a family of four stopped in for dinner on New Year’s Day at a Brazilian restaurant off Kirkman Road, waitress Flaviane Carvalho connected with the little boy. Just 11 years old and hiding behind a long-sleeved hoodie and his mask, Carvalho sensed something wasn’t right.

“Everyone received food, but not the kid,” she explained. “This was very strange to me. You don’t deny food for a kid, especially in a restaurant… I could not see much of his face, but I could see he had a big scratch between his eyebrows.” Moments later she noticed bruises on the side of the child’s eye and along his wrists.

Carvalho suspected abuse and knew she had to do something. She noticed the boy was seated where she could send him a message the adults would never see. Carvalho whipped out a marker and piece of paper and wrote, “Are you okay?” Then she showed it to him. The boy shook his head no. Carvalho scribbled another note, “Do you need help?” This time he shook his head yes.

Carvalho contacted the owner of the restaurant, Rafaela Cabede, who advised her to call 911 immediately. Police showed up and soon discovered the boy was beaten from head to toe… cuts, scratches, bruises all in different stages of healing. Detectives say he was severely underweight, at least 20 pounds less than most children his age. The boy and his 4-year-old sister were taken to the hospital for help. His mother and stepfather were arrested. Both children are now in the care of the Department of Children and Families.

“We truly believe that this was a holy provision and we are very blessed that we were able to help this child,” Cabede said. “This has to encourage other people. When you see something, say something. We know that speaking up is the right thing to do, but it takes more than acknowledging. It takes courage.”

Director of Behavioral Health Services for Catholic Charities of Central Florida, Catherine Galda, agrees. “Taking a few moments to educate ourselves about the signs can mean the world to a child in distress,” she said. “Unfortunately, COVID-19 has served to exacerbate and increase levels of abuse among children. As difficult as this can be to imagine, we as a community are not powerless to intervene.”

Carvalho and Cabede are both Christian mothers who believe they don’t just serve food, they serve their community. The coincidences that night are hard to ignore. Carvalho was not on the schedule, but came in for a sick co-worker. The family was the last customers of the night. The boy sat in the only chair at the only table in the entire restaurant where she could communicate with him without others seeing.

Orlando Police Chief and St. James Cathedral parishioner, Orlando Rolón, strongly feels if Carvalho didn’t step in, this could have been a homicide investigation. “I believe this was divine intervention,” said Chief Rolón. “What motivated her to not ignore the situation is heroic in my opinion. The life of the child was saved due to her actions and for that she is our hero. The courage Flaviane exemplified is inspiring and demonstrates there is more good than evil in this world.”

“I think I was a tool in God’s hand,” insists Carvalho. “I just did what human beings are supposed to do for others, especially kids. I’m feeling sad for him, but I’m so proud because he also had the courage to ask for help and I’m so glad that he did.”

If you suspect a child is the victim of abuse or neglect the Florida Abuse Hotline is live 24/7 and anyone can give a report. The number is 1-800-962-2873 or https://reportabuse.dcf.state.fl.us/

By Jennifer Drow of the Florida Catholic, January 21, 2021