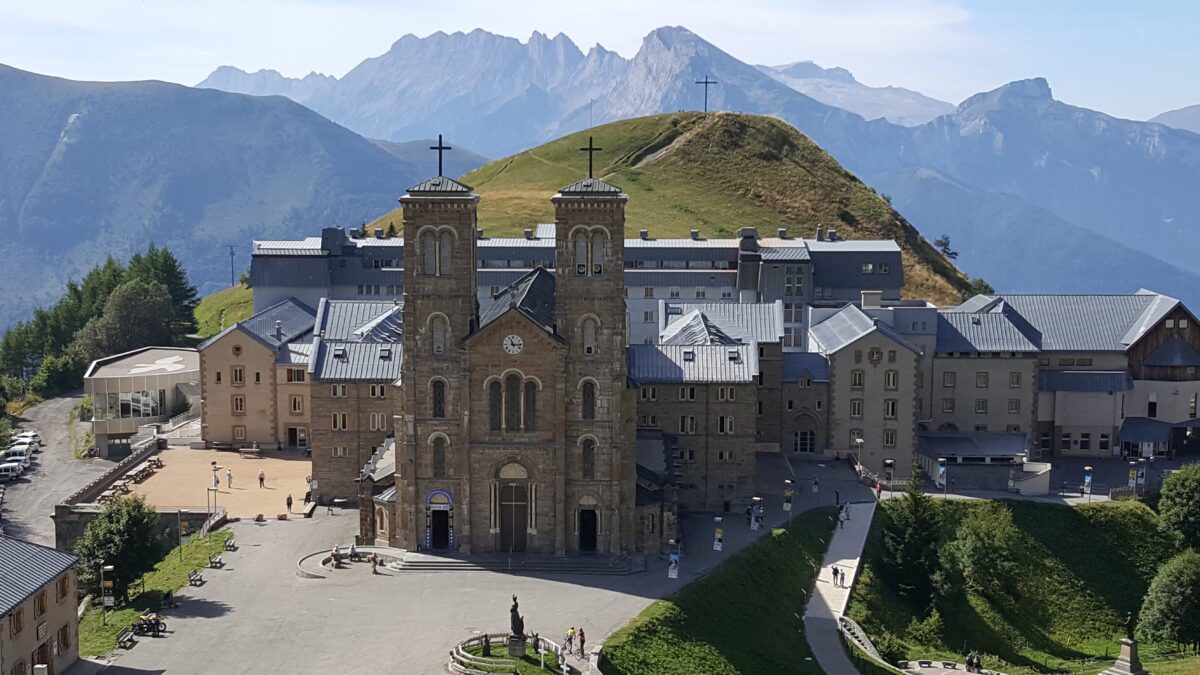 La Salette, France | A potato famine in Ireland, a war in Afghanistan, slavery, a gold rush, and many fallen away Catholics… These were the events occurring around the world Sept. 19, 1846 when Our Lady of La Salette appeared crying to two young farm children, Maximin Giraud and Mélanie Calvat, in the French Alps. Her message was one of prayer, presence, and forgiveness. One hundred seventy-five years later, the message still resounds.

On Sept. 13, Missionary of La Salette, Father James Henault, set out on pilgrimage with Bishop John Noonan and a central Florida delegation of priests and laity to La Salette to celebrate the anniversary. “This anniversary is an opportunity for all of us to gather, unfortunately in a smaller way because of the pandemic, on the holy mountain and be able to celebrate as a community, as the people of France and the Church – the fact that Mary’s message is still relevant to us today and important to us,” Father Henault said.

Ten La Salette priests serve the Diocese of Orlando at Good Shepherd and Blessed Trinity Parishes in Orlando and at the Orlando International Airport. Invited by the La Salette priests, Bishop Noonan welcomed the trip saying, he looked forward to “giving thanks to Our Lady for the gift of priesthood and service to her son, Jesus Christ, preaching the Gospel all over the world.”

As more Catholics drift from the Church each day, Father Henault emphasized what is important “is whether they believe in God or not. Whether God is important in their lives. That is the constant message of La Salette and the missionaries bring it to all the different countries we serve. It’s how to deal with the human needs and spiritual needs of people – saying when you put it all together, God can do wonderful stuff for us.”

“The most important part of the message for me is the invitation to return to Church, to God, our religious practices as Catholics, and let God be the source of life for us,” said Father Henault, pastor of Good Shepherd and spiritual director for La Salette Laity in North America. “People had lost a sense of the importance of God—the way in which religious beliefs and practices enable us to live out our lives fully and completely.”

He noted a similarity in the way people saw God then and see Him now. Instead of being true to God they proclaim, “be true to yourself”.  Like the farm children, much of the world has lost its hope, its practice of the faith, its reliance on God. Controversy and hatred continue to divide God’s people.

Bringing hope, roughly 75 parishioners celebrated with a novena to Our Lady and through the commitment to their formation, renewed at the Annual Day of Recollection for Laity at Good Shepherd Parish Sept. 11 led by Father Roland Nadeau, M.S., pastor of Blessed Trinity Parish in Orlando.

Father Nadeau, M.S. said the anniversary is significant because, “The call to reconciliation, the call to conversion, remains as actual and as urgent as it ever was.”

For Carol O’Keefe, Good Shepherd parishioner, the La Salettes provide a ministry of presence communicated through Our Lady’s message. “It seems like whatever our spiritual need is at the time, God sends us a La Salette priest who fills that,” she said. Her message of reconciliation also speaks to O’Keefe who admits she struggles with judgment. “(Mary) helps me to be more forgiving,” she said.

This message of God’s presence permeates the Church and is alive in the Eucharistic feast. “The Eucharist is where we, as Church, encounter each other and encounter God…” The union with Christ’s suffering bears the fruits of forgiveness and peace.

Father Henault explained, “Mary focuses on the first three commandments – people don’t take Sunday off – people don’t go to Church and worship God; people use the name of God in vain; people create their own false gods out of the economy or political situations. The Eucharist is where we are nourished by the Lord, by His Word at the table, by one another as community.”

He acknowledges Mary’s gentleness inviting the children to prayer. Ultimately, her message brought about an entire spiritual renewal and a revival of the Church emerged.

“These two children weren’t saints. They were ordinary, everyday, non-Church going, non-practicing Catholics who were reformed in their own lives by the apparition and helped reform others in the same way. It becomes a joint effort,” Father Henault reflected. This too is La Salette clergy’s and laity’s mission through Mary.

By Glenda Meekins of the Florida Catholic, September 20, 2021