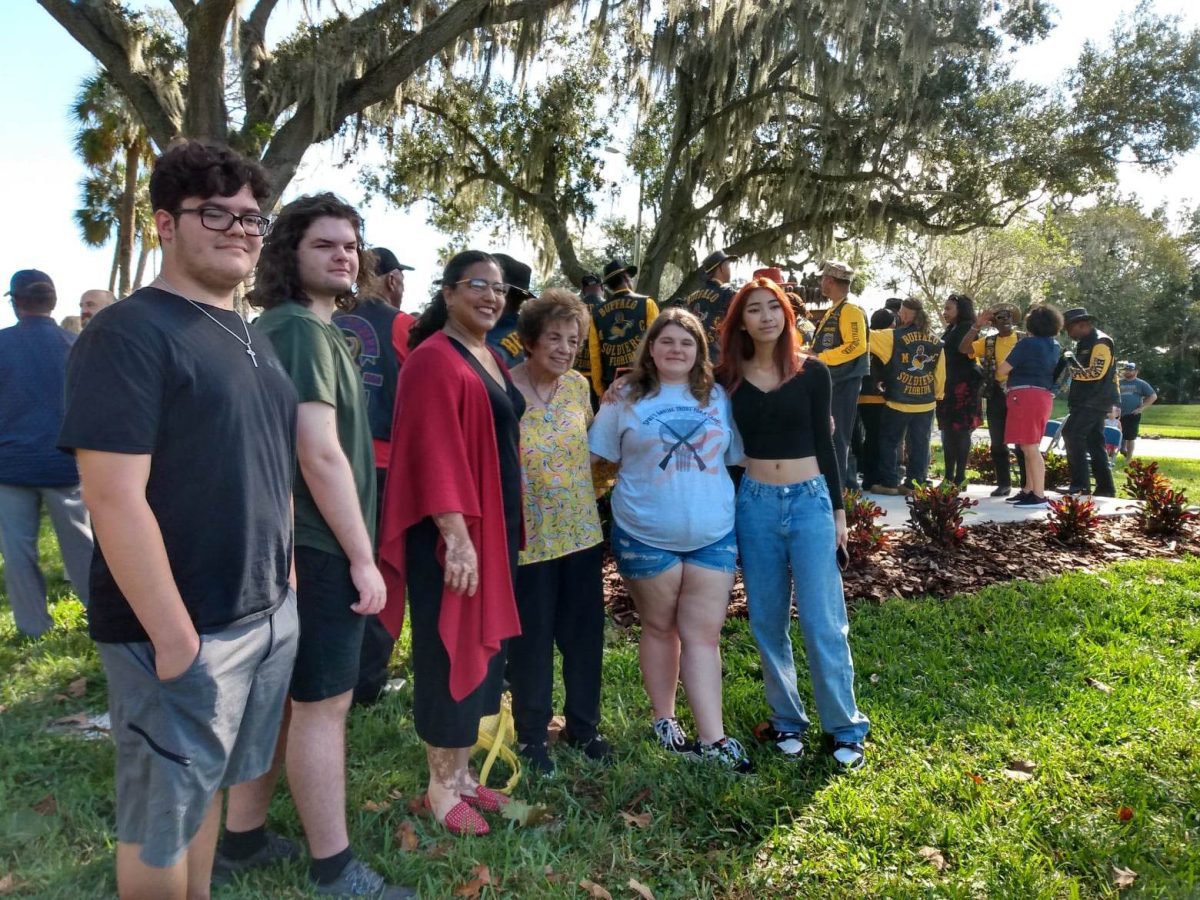 LAKELAND | Under the shade of oaks near the shores of Lake Beulah in Lakeland stands a bronze obelisk that tells an important story that many Americans and local Floridians might never have heard.

The Friends of Freedom statue memorializes soldiers of the 9th and 10th Calvary, known as “Buffalo Soldiers,” who fought alongside Cubans fighting for freedom from Spain during the Spanish American War. Buffalo Soldiers were black men who served in the military to secure their own freedoms in the post-emancipation United States.

The statue is the newest to grace Veteran’s Memorial Park in Lakeland, which includes memorials honoring veterans who served in the Civil War, World War I, World War II, the Korean War, the Vietnam War, the Gulf War and the War on Terror. As the statue was dedicated Nov. 12, 2022, retired U.S. Air Force Col. Gary Clark said, “The one piece missing was a Spanish-
American War, of which the city of Lakeland and Polk County played a significant role at that time.”

The story of the Buffalo Soldiers of Florida is an inspirational one, yet one lost in many history books.

Perhaps that is why Platform Arts Inc. and the Florida Veterans Council produced a monument to recognize Lakeland’s distinctive role in the Spanish American War and used the project as an educational tool to teach youths. Starting about a year and a half ago, Platform Arts invited local high schools to participate in the project and submit artwork significant to the Buffalo Soldiers and the Spanish American War.

Lula Peoples and Lucile Pfund, both art teachers of Santa Fe in Lakeland, embraced the opportunity. They showed a video produced by Platform Arts called “Those Men that Came Before,” which detailed why the 9th and 10th U.S. calvary of
Buffalo Soldiers came to Lakeland and why it was so important.

Richard Wilder, president of Buffalo Soldiers Florida and a Vietnam veteran, attended the dedication and participated in the educational video. He hopes the video and monument share a part of the past, a part of his heritage that has been “omitted from the history books.”

“The presence of the 10th Calvary (of Buffalo Soldiers) in Lakeland was a positive influence on the black residents here in Lakeland,” Wilder said in the video. “They saw these men hold their heads up. They saw these men with a sense of pride
and dignity, and they saw them carry that with them everywhere they went in Lakeland, even in the face of racism.”

Those words inspired Taylor T., Blaine K., Emily D. and Jacob V., students in Peoples’ and Pfund’s art classes. They created art that was later chosen to be fired into the bronze sculpture.

“Then they came up with their own ideas, made drawings and worked on them for several weeks,” Peoples said. “When we got the call that four were chosen for their art we were so immensely proud.”

The sides of the obelisk include narrative scenes and verbiage that speak to the role of history of the war and soldiers who were based in Lakeland and fought in Cuba. At its top are members of the Calvary on horseback and at the base are the
students’ drawings memorialized in bronze.

“They transformed their drawings into a relief sculpture that you see on the monument now,” Pfund said. “(The artwork) was fired in our kiln at school and then transferred to (Platform Arts) so they could incorporate them in the statue.”

“We are so proud of them,” Peoples added. “Each of them were very careful with their attention to detail, and were very detailed about why they drew what they drew. They worked hard and did their best and we are over the moon to be a part of this legacy.”

Santa Fe has the distinction of being one of only two schools incorporated in the statue, the other school being students from Lake Region High School in Eagle Lake.

“We are so excited that they are part of a permanent legacy and what it represents — freedom and representation,” Peoples said. “And it’s an honor for our school.”

According to historians the moniker of Buffalo Soliders was given by Native Americans to black soldiers because of their dark, curly hair, which resembled a buffalo’s coat and because of their fierce nature of fighting. The nickname soon became synonymous with all African- American regiments formed in 1866, such as the 9th and 10th Calvary.

All four students whose artwork represented Santa Fe were present for the dedication. They said they were not only proud to be part of the statue but were humbled by what they learned about the Buffalo Soldiers. Taylor and Blaine are seniors at Santa Fe and Emily is a junior. Although Jacob is now a senior at George Jenkins High School in Lakeland, he produced his work while at Santa Fe.

Artist Becky Ault of Art Research Enterprises Inc. designed and completed the statue in cooperation with Platform Arts. The statue traveled from Pennsylvania to Florida and Buffalo Soldier Motorcycle clubs from across the nation escorted the monument to its final destination. Members of the clubs from Harrisburg, Pennsylvania, Orlando, Tampa and other Florida cities were on hand for the dedication, and Buffalo Soldier reenactors in uniform and on horseback participated in the procession.

By Jean Gonzalez of the Florida Catholic staff, November 17, 2022