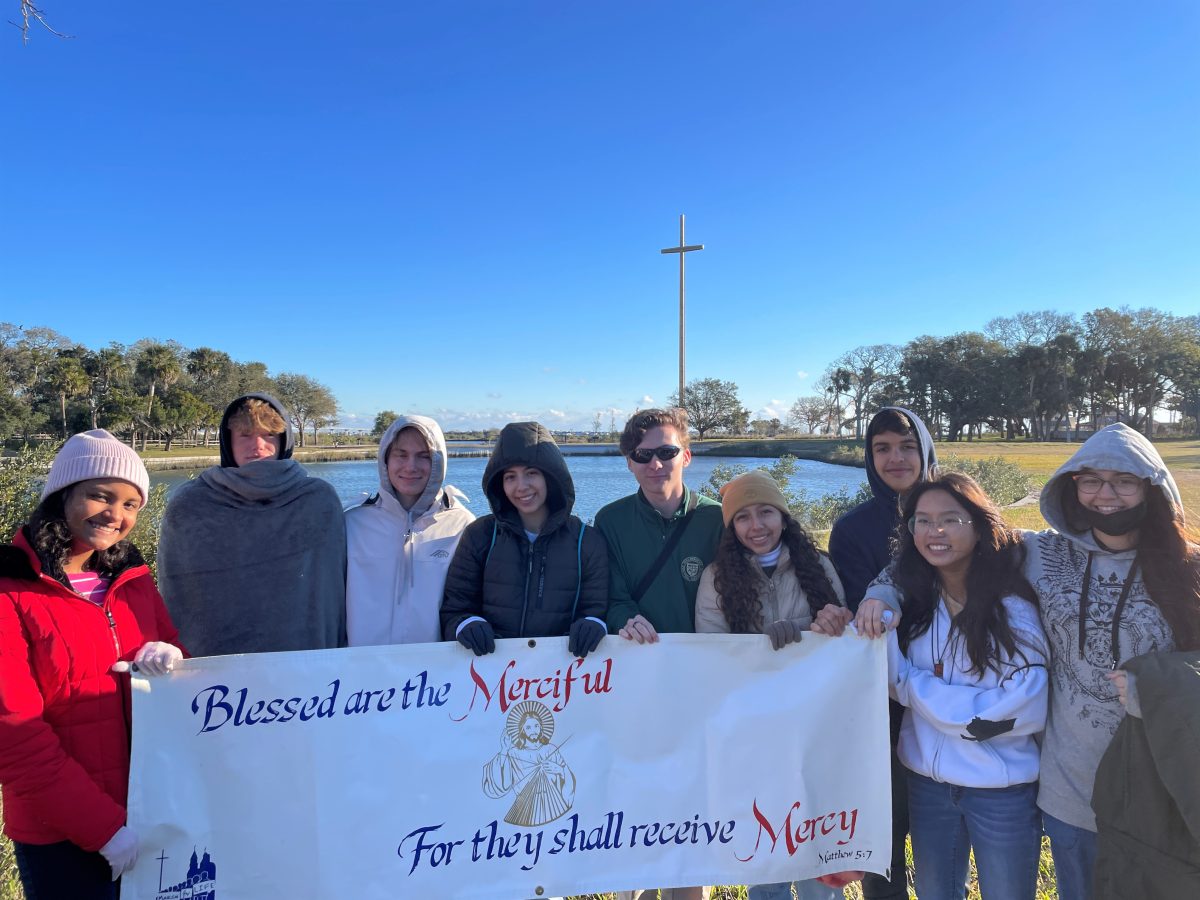 Melbourne Central Catholic High School’s Students for Life stand on the grounds of the National Shrine of Our Lady of La Leche, just before the March for Life St. Augustine, Jan. 14, 2023. (COURTESY)

ST. AUGUSTINE | It was a chilly morning at 43 degrees, not counting the wind blowing off the Matanzas River. At the National Shrine of Our Lady of La Leche, the faithful participated in the celebration of Mass with St. Augustine Bishop Erik Pohlmeier.

“The coldness of this morning is to remind us of the cold and discomfort that surrounds most women approaching a decision to have an abortion,” he said.

His words invigorated the March for Life pilgrims. Jan. 14 marked the final March for Life St. Augustine, a force in the visible witness of pro-life believers to the community since 2007. As of 2024, all marches will be conducted in state capitols to encourage state legislators to pass life-saving protections for the unborn.

Welcoming more than 3,000 pro-life advocates — a big increase from the 700 who marched down St. George’s Street the first year – marchers walked with conviction waving banners and signs with the culture of life message, “We choose to love them both.” It refers to the frequent, unfounded criticism of pro-choice believers that mothers are left to fend for themselves after delivery. In fact, most pro-life clinics now offer baby clothes, food and parenting classes.

Ingrid Pedraza, a parishioner of Holy Cross in Orlando, can testify to that accompaniment. She keeps in touch with a grandmother who adopted her mentally ill daughter’s child after choosing life on the sidewalk in front of an abortion clinic. Mother, child and social worker were all abortion-minded.

“We saw a change in the grandmother. This is why it is so important to be present,” Pedraza said. That was 10 years ago. Since then, the grandmother adopted her daughter’s second child. Holy Cross parishioners all contributed to their needs. The Respect Life ministry sends cards and occasional birthdays gifts, and accompanies that grandmother who helped her daughter find courage to choose life.

“We are here to help. As Catholic Christians we believe in the soul and we want to save these souls. That is the goal,” Pedraza said. “The mission is so big. We’ve been put on this earth to leave a legacy and be that instrument God desires of us.”

While Pedraza took the ministry’s reigns from her daughter, Lydia Philip, St. Mary Magdalen Culture of Life chair, followed in her husband’s footsteps. The advocate often invited her to attend vigils and to pray. She admittedly felt uncomfortable praying in front of the nearby clinic, but she went anyway. It was a Saturday and she saw many cars.

“It cemented there was work to be done,” she said.

Despite Philip’s desire to attend March for Life St. Augustine for years, she never could – until this year. She found the experience extremely uplifting.

“There is so much negativity in the world,” she said. “It was great to see young moms and families marching. I am so excited to witness all the young people in the pro-life movement now. They are the fuel to keep on going.”

Marching “shoulder to shoulder with (her) people” in the cold, she took stock of the significance of their presence. Bishop Pohlmeier’s words echoed in her mind. Speaking of the reversal of Roe v Wade, he noted there is still much work ahead.

“The law changed, but now it’s a matter of life and souls and changing hearts for life,” he said. “We have to allow the Word of God to penetrate, not to us, but through us.”

“It was very powerful,” Philip said. “It spoke to the heart.”

A bonus was meeting keynote speaker Melissa Coles, who shared her story of deciding against abortion while on the table. She chose adoption instead, another way of choosing “to love both of them”. After meeting her son 19 years later, the two are committed to the fight for life.

Philip, who received the Culture of Life award last October 2022 for all her teams’ efforts to promote life from the unborn to the elderly, doesn’t know if she will make it to Tallahassee next year and worries the distance may deter many. Yet she remains committed to the words of her pastor, Father Charlie Mitchell, “You can do many things on the surface, but if you go deep, that’s where you get the seed rooted.”

“That is how I see it,” she said. “We’ve gone deep. This year we’re having the Eucharistic Revival and after we will go to other things. It’s having the vision to spread it. We need to bring back a culture of love for the babies, the elderly, for so many people.”

By Glenda Meekins of the Florida Catholic staff, January 20, 2023