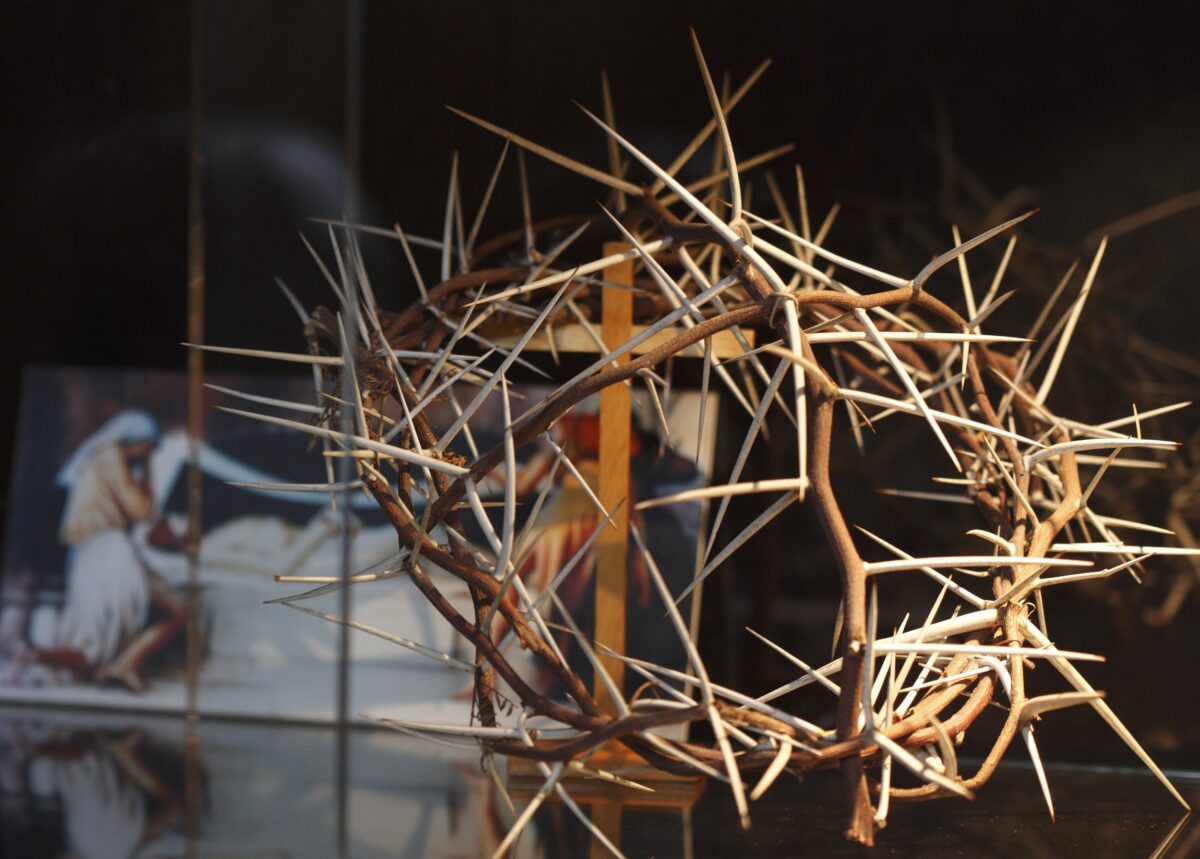 An image of Jesus in death is seen behind a crown of thorns and a crucifix in a display on the Shroud of Turin in the Church of San Lorenzo in Turin, Italy. This Lent, seek new opportunities to remove old thorns from past wounds. (CNS photo/Paul Haring)

ORLANDO  |  Ash Wednesday is around the corner, inaugurating the Lenten season. Across the globe, Christians are deciding what to sacrifice for spiritual growth. The choice must be discerned. Clergy note it is not a self-help type of discipline one is looking for, like a New Year’s resolution. It is much deeper. Rather than viewing it as a burden, why not try approaching it through the lens of love and allowing that love to change our relationship with our Creator and others?

In a recent homily by Father Joshua Swallows, parochial administrator of Most Precious Blood Parish, he recalled a Catholic Campus Ministry student asking why he was “obsessed with death” and smiles every time he speaks of it. Referring to a “dying to self,” he noted why he loves Lent.

“I love what happens when I make the big sacrifices and see what God does with them.”

The challenge is to meet Jesus in His final sacrifice for something greater and the anticipation of the fruit of his sacrifice excites him. Father Matthew Hawkins, of St. Paul Parish in Leesburg, explained how sacrifice and suffering are good only “when they serve a greater purpose.” Paraphrasing philosopher Friedrich Nietzsche, he added, “When man has a why, he can overcome any how.”

Echoing Father Swallows, Father Hawkins said one fruit of sacrifice is realizing “those things we relied upon for happiness and fulfillment are really not as necessary as we once believed.” He was reminded of Jn 8:34: “Anyone who sins is a slave to sin.”

“Sacrifice allows us to exercise our will and regain a sense of freedom over our passions and appetites. It stirs a greater hunger and longing for what will ultimately satisfy, for the time when the wedding guests will no longer fast (Mt 9:15),” Father Hawkins said. “Sacrifice reminds us we are not made for this world and that growth demands growing pains.”

Fasting is not exclusive to Catholicism. As Father Emmanuel Akalue, pastor of St. Rose of Lima Parish in Kissimmee said adherents of Judaism, Islamism, Buddhism all fast.

So, what is the big deal? Father Akalue said all have different reasons, “so the motive matters.” Christocentric fasting recalls Christ’s response to the Pharisees concerning fasting. As stated in Mt 9:15, “Can the wedding guests mourn as long as the bridegroom is with them? The days will come, when the bridegroom is taken away from them, and then they will fast.”

“Christ’s reply shows the originality and uniqueness of our Christian fast and anticipated our Lenten fast,” Father Akalue said. “The season of Lent is that ‘providential moment of grace’ (cf. 2 Cor 6:2) when we relive how the Bridegroom – Jesus Christ – was taken away from us: the time of His betrayal, arrest, passion and cross.”

He added the Lenten fast both individually (cf. Mt 6:1-6, 16-18) and collectively (cf. Jl 2:12-18) “is a response to God’s inestimable gesture of love for us — a redemptive and transformative love. It is about a radical embrace of the path of the Cross in self-discipline.”

When Jesus chose the path of suffering to redeem and transform the world (cf. Jn 3:16; 12:32; 1 Jn 4:10), Father Akalue explained Christ “underlined the indispensability of sacrifice for our salvation: ‘Indeed, under the law almost everything is purified with blood, and without the shedding of blood there is no forgiveness of sins’ (Heb 9:22). This inestimable love of God in Christ has set the world on fire with the sense of sacrificial and transformative love; as Christ had anticipated: ‘I came to cast fire upon the earth; and would that it were already kindled!’ (Lk 12:49).”

Fasting unites us to Christ in a deeper way, even strengthening our own “spiritual ability to battle against the enemy,” Father Akalue said. He likened fasting to military drills for “battle readiness.”

“Our Lenten sacrifices – fasting, prayer and almsgiving – are part and parcel of our spiritual arsenal for the spiritual warfare (cf. 2 Cor 10:3-5). Though our salvation ultimately depends on God (cf. Jn 15:5; Eph 2:5, 8), God requires our willing and loving cooperation as a way of inculcating in us heroic virtue or spiritual discipline, because a father disciplines his children (cf. Prov 3:11-12). As St. Augustine declared, “God created us without us: but he did not will to save us without us” (St. Augustine, Sermon 169, 11, 13: PL 38, 923; in the CCC 1847).

So, what does God do with our sacrifices?

Deacon Dave Camous, director of permanent diaconate, said much of that relies on what we invite into the newly focused center of our being. If our sacrifice is ultimately self-serving, then he says we often fail, noting the key is to give up something that gets in the way of our relationship with Christ.

“Modern society appears fixated on my individual rights, with little accountability to anyone else. I am encouraged to live a ‘me-centered life,’” he said. Because of this mindset, it is often difficult for us to view our Lenten sacrifices as something to embrace joyfully because, it takes “me out of the center of the equation.”

Yet, giving something up “is inherently beneficial.”

“Self-denial, not giving into all of our impulses, is an essential component of a God-centered life,” the deacon added.

Deacon Camous recalled a “transformative” Lenten experience when he gave us “mindless” television. Instead of arriving home and automatically turning on the television for background noise or to fill an evening, he used that time to pray.

“(I realized) I was crowding God out with sitcoms,” Deacon Camous said, adding he adopted a new routine that included dedicated periods of prayer, including a daily examen. “God no longer was on the outside looking in, but a constant companion in my daily life.”

Now when people ask him what they should give up for Lent, he tells them to ask themselves, “What is it that gets in the way of you loving God and loving neighbor?”

By Glenda Meekins of the Florida Catholic Staff, February 23, 2022