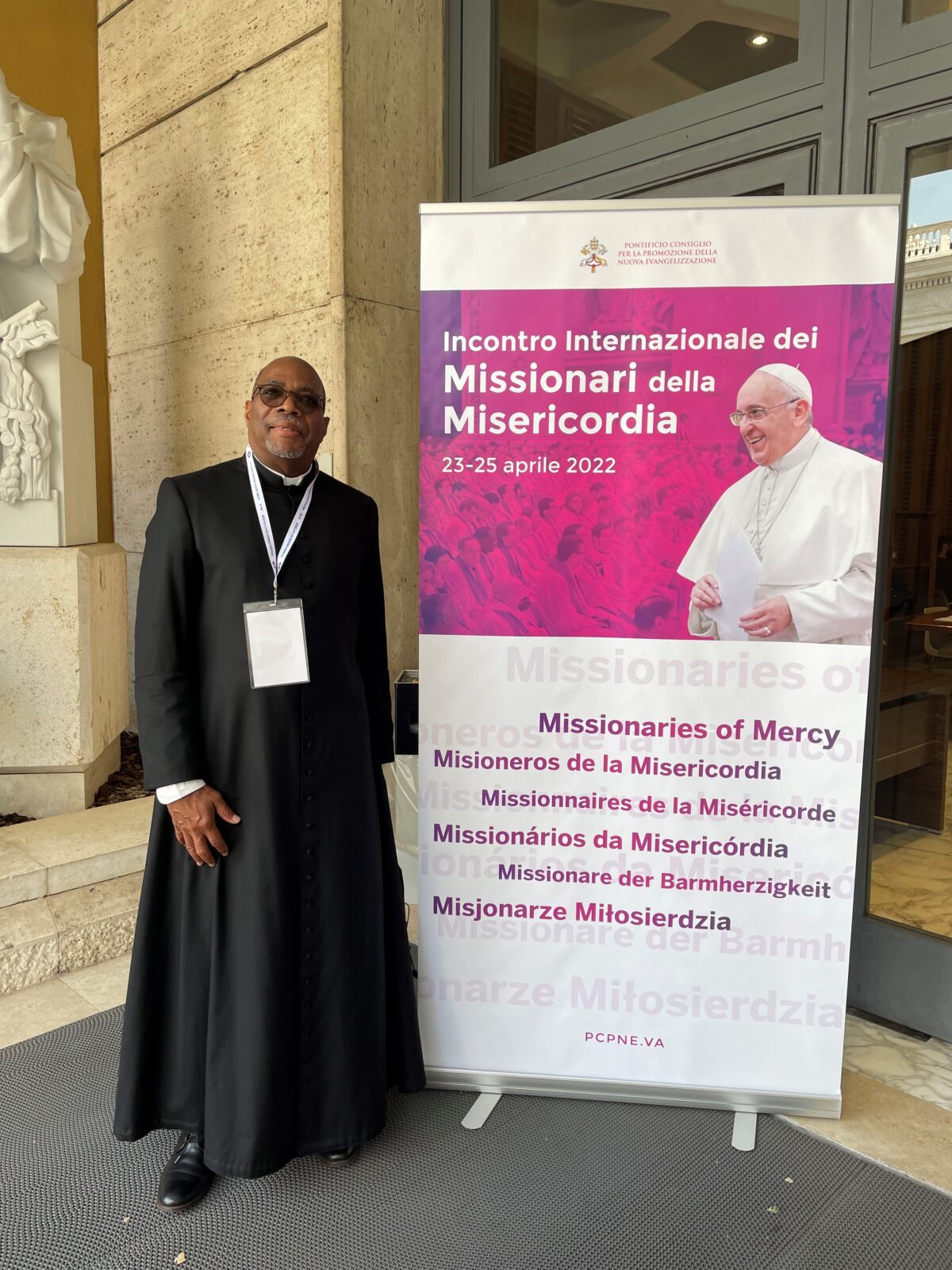 Diocese of Orlando Missionary of Mercy, Father Anthony Aarons at the third International Gathering of the Missionaries of Mercy in Rome. (COURTESY)

ROME | More than 300 priests gathered in Rome for the Third International Gathering of the Missionaries of Mercy meeting, April 23-25. They met with the Holy Father, shared experiences and concelebrated Divine Mercy Sunday Mass with Pope Francis in St. Peter’s Basilica. Among them was our own Father Anthony Aarons who serves both Catholic Charities of Central Florida and Bishop Moore Catholic High School.

Bishops and others from the Pontifical Council for the Promotion of the New Evangelization, the dicastry overseeing the missionaries, held conferences and talks around the theme, “The Missionary of Mercy: A Sign of Welcome”.

April 25, during a private audience with Pope Francis, the pontiff exhorted, “Missionaries of Mercy give God a face and a voice.” Father Aarons said he called them to carry out their mandate, originally issued in 2016. “There are three things that we should do and this is what stands out most for me: Forgive! Forgive! Forgive!” Father Aarons noted. “This will only happen if we truly see the person who is before us.”

“Bishop Moore Catholic High School and Catholic Charities are indeed two places where I can live out the mission of being the face and the voice of God both in confession and in conversation,” he added. “Forgiveness is about lifting the burden from another and releasing them to live in the assurance that they are never alone.”

Talks addressed the missionaries as “a man who welcomes”, their “call to holiness”, and their relationship with internal and external forum.

Meeting in various language groups the missionaries shared experiences during the pandemic and identified some best practices for their ministry. Time was also set aside to “encounter with our Merciful Lord in a Penitential Liturgy and Eucharistic Adoration,” he said, at Santa Maria in Vallicella during which time they participated in the Sacrament of Reconciliation with one another.

North American Missionaries invited missionaries from the Ukraine to share news of the on-going battles in their country. There are nearly 30 of them, but only two were able to make it to Rome for the international meeting.

The gathering concluded with a “Mercy pilgrimage” to the four major Basilicas in Rome – St. Paul Outside the Walls, St. John Lateran, St. Mary Major and St. Peter’s.