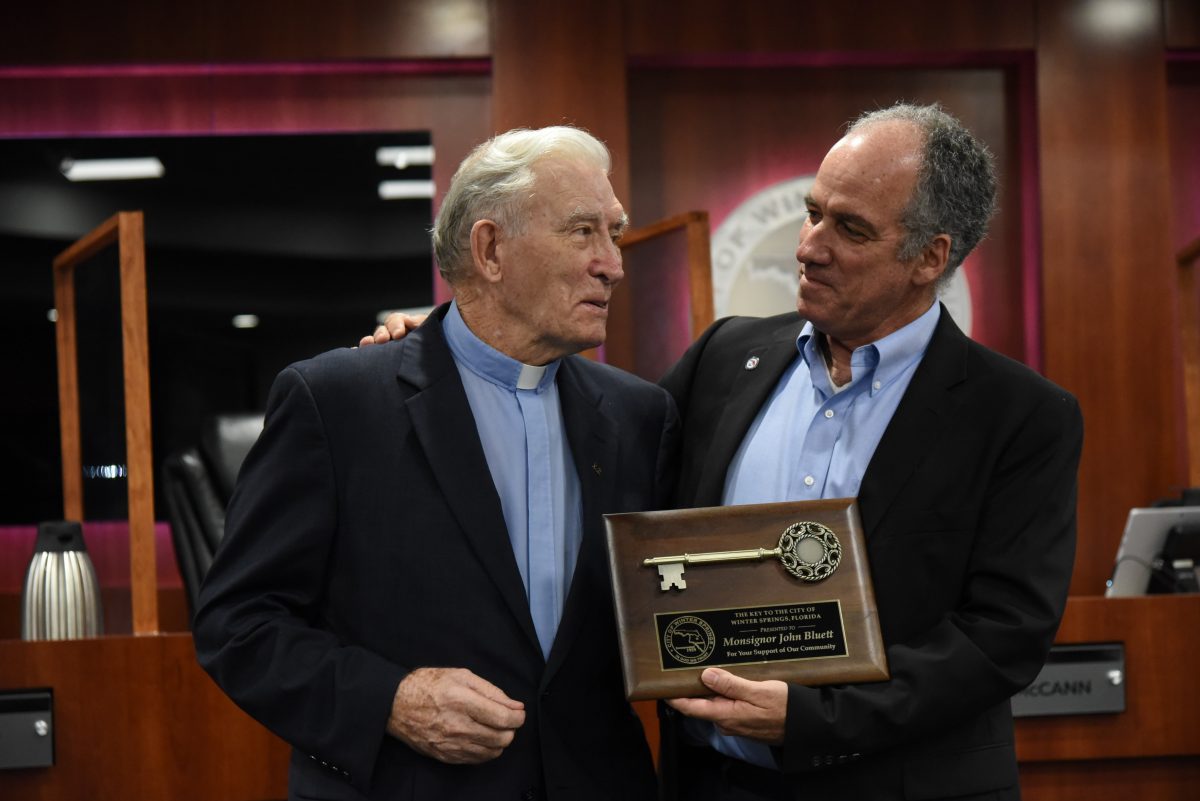 WINTER SPRINGS | In an emotional presentation, Monsignor John Bluett, pastor emeritus of St. Stephen Parish, received the keys to the City from parishioner and Winter Springs Mayor Kevin McCann at City Hall, Aug. 9. In typical fashion, Monsignor Bluett gave credit to his parishioners and the community he’s served since 1985. The award is the highest the city bestows and is not given frequently.

Commissioner Kevin Cannon, also a parishioner of St. Stephen, was responsible for the nomination. “It was about the easiest motion I’ve ever made and the easiest sell on any motion I’ve ever made,” he said. Cannon noted, “Father John has, for so many years, been a pastor in the truest sense with his outreach to anyone in need… in the Catholic community and beyond. It was the appropriate thing to do.”

The pastor was recognized for his work, from being instrumental in the establishment of Pathways to Care, a rehabilitation center for homeless persons after surgery, to his support of Seminole and Orange County public schools during COVID-19. Last year the parish donated hundreds of iPads and secured hotspots for students without computers. He also recruited parishioners to make masks for first responders.

Several parishioners crowded into City Hall to join the celebration. As he presented the plaque with the key, Mayor McCann told Monsignor Bluett, “I hope you feel the love the community has for you. I hope you understand how much of an impact your career has had on many, many people. You are truly loved and appreciated.”

“I have been blessed by people in this community, by families who have made it a community,” Monsignor Bluett said. “We’ve been an amazing community that helped others, more than we could have imagined along the way… It doesn’t happen in a church, in a synagogue, in a pub. It happens everywhere because these good people make it happen.”

By Glenda Meekins of the Florida Catholic, August 12, 2021