On mission to change lives 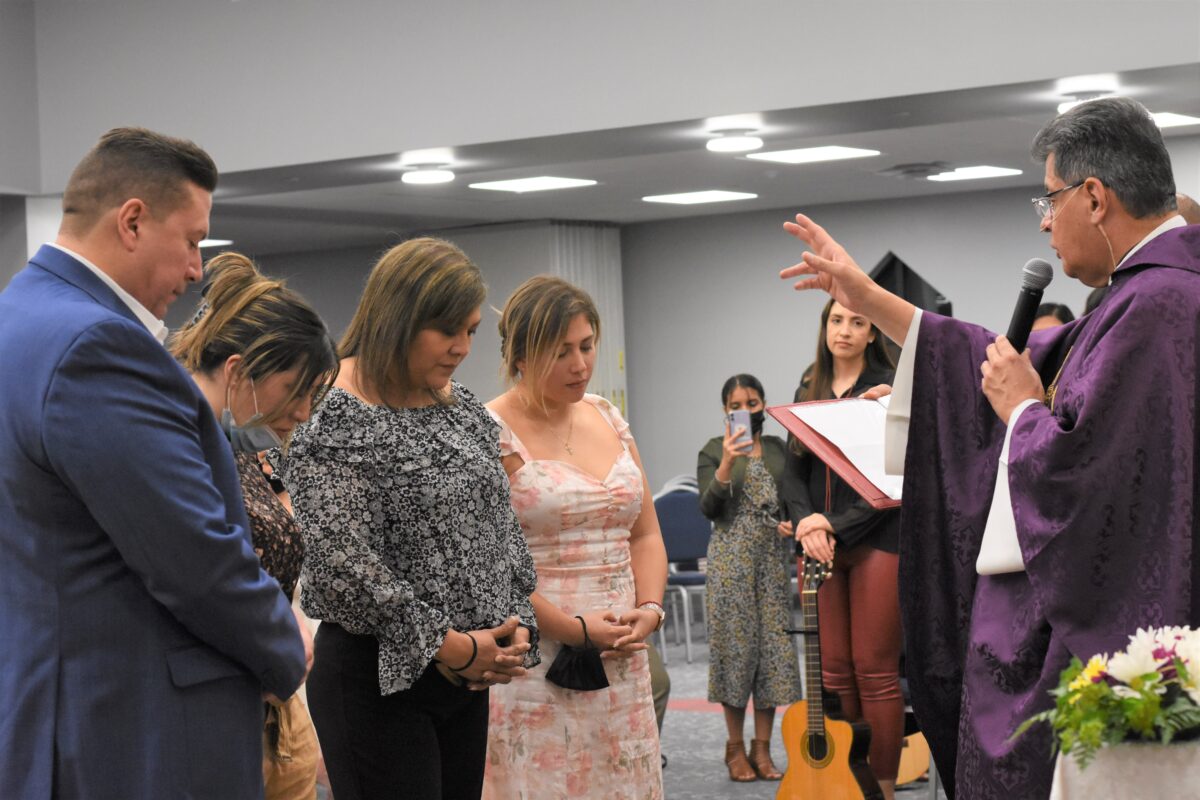 From left: Eugene, Erin, Jessica and Shannon McLoughlin receive a blessing by pastor of Holy Cross Parish, Father Esaú García, Nov. 27, before they leave on mission to New Mexico, as disciples of the Neocatechumenal Way. (GLENDA MEEKINS)

ORLANDO | Eugene McLoughlin knew it was his last chance: the infidelity, substance abuse, and three separations from his wife, Jessica, and three children. Jessica offered reconciliation if they moved away from turmoil and temptation. They left Ecuador and moved to the U.S. in the hopes of picking up the pieces of a shattered marriage in 2008.

For Jessica, who grew up in a family living the Neocatechumenal Way, a return was long overdue. For Eugene, it meant a new life, full of hope and promise. For their children, it meant reclaiming a father they thought they had lost and finding an even greater Father’s love can heal all wounds.

In 1975, Jessica’s grandmother and her children joined the Neocatechumenal Way, an association of the Christian faithful to help people, baptized and not, rediscover and fully live their faith. Eventually, Jessica’s family also joined. Jessica had known nothing else until she moved to New York, reconnected with Eugene and got married. Eugene was not practicing his faith. It didn’t take long for the troubles to begin. Jessica also became distant. They marital troubles overwhelmed her and after they lost their 1-month-old daughter, she rebelled, becoming bitter and angry with God.

After living in Ecuador for eight years, they arrived in Orlando and discovered Holy Cross Parish just one block away. When they drove up, the parish sign read, “Come and listen to good news that can save your life.” The message was announcing catechesis for the Neocatechumenal Way.

This was a new day. Reluctant at first, Eugene joined Jessica for a catechesis and formation. He was suspicious, but then the speaker shared his story and said, “No matter how bad you are in your life right now; no matter how low you are or where you find yourself, God loves you exactly how you are right now.” Eugene said, “That was the moment my heart wrapped around this thing. I had never heard that before. It was like a punch in the face. I was blown away. At that moment Jesus Christ grabbed my heart.” Every time he returned, he heard something new. “It was like falling in love,” he recalled.

The family has been strong in the faith ever since. “It is very special,” said Jessica who didn’t think she could reclaim her marriage. “It was something I longed and asked God for, and thought impossible… It was an assurance that my parents’ prayers had not fallen on deaf ears. They never doubted it would come to fruition in God’s time.”

She said returning to church with her husband and family and having her marriage restored, “Is like a miracle. Serving the Lord is the greatest gratitude we can offer. It gives purpose to everything.” She does not take for granted her own ability to forgive. “All the glory belongs to God.”

Joining Holy Cross’s community of more than 250 neocatechumenates, the McLoughlin children – Shannon, 23, Bryan, 22, and Erin, 18, are in their own communities.

As they grew in courage, the family considered becoming missio ad gentes, missionaries to the people. These are missionary families who go to places of little or no Catholic faith and share the Good News.

Last summer, they accepted the request of the Bishop of the Diocese of Las Cruces. The McLoughlins left in early December and joined three more families to live as witnesses to the Gospel in the hopes of increasing the faith of residents and eventually building a church.

Currently Las Cruces has two parishes, but parishioners are dwindling and most attend only until their children receive the Sacraments. Eugene explained, “They are like a bright light in a dark place. Through work and going to church, and meeting folks, slowly but surely people start asking what they’re doing there.” Then they say, “Bringing people like you closer to God.”

“What excites me is that it’s going to be something new and completely different,” said Shannon. “We are so used to having this whole community. We are going from a (youth) community of 40 brothers and sisters, to evangelize in an area full of people without faith.”

She acknowledged leaving her comfort zone is slightly jarring, “But how can you say no to God when He has relieved us from so many things?” she asked recalling her family’s situation when they arrived in Orlando. “At the end, He says, ‘I have you.’ So, when He calls, He calls. That is what touched me. I have seen in my life that God has saved me.”

Shannon was also assured by Father Esaú García’s words, pastor of Holy Cross, who celebrated Mass and blessed the family before they left for New Mexico. He said, “God calls, but He provides. He does not call the qualified, but qualifies the called.”

Reflecting on the road taken to arrive at this moment, Eugene noted, “Many of the brothers and sisters in my community were like me; Catholic by tradition, but faith had no relevance in our lives. I know that my being hopeless was a consequence of my lack of faith. If we can bring anyone to rediscover the love of God and to grow in faith in the Catholic Church, through the Neocatechumenal Way, people will find a reason for life, a hope in their suffering and an experience of the resurrection of the Lord Jesus Christ just as we did.”

By Glenda Meekins of the Florida Catholic Staff, December 20, 2021