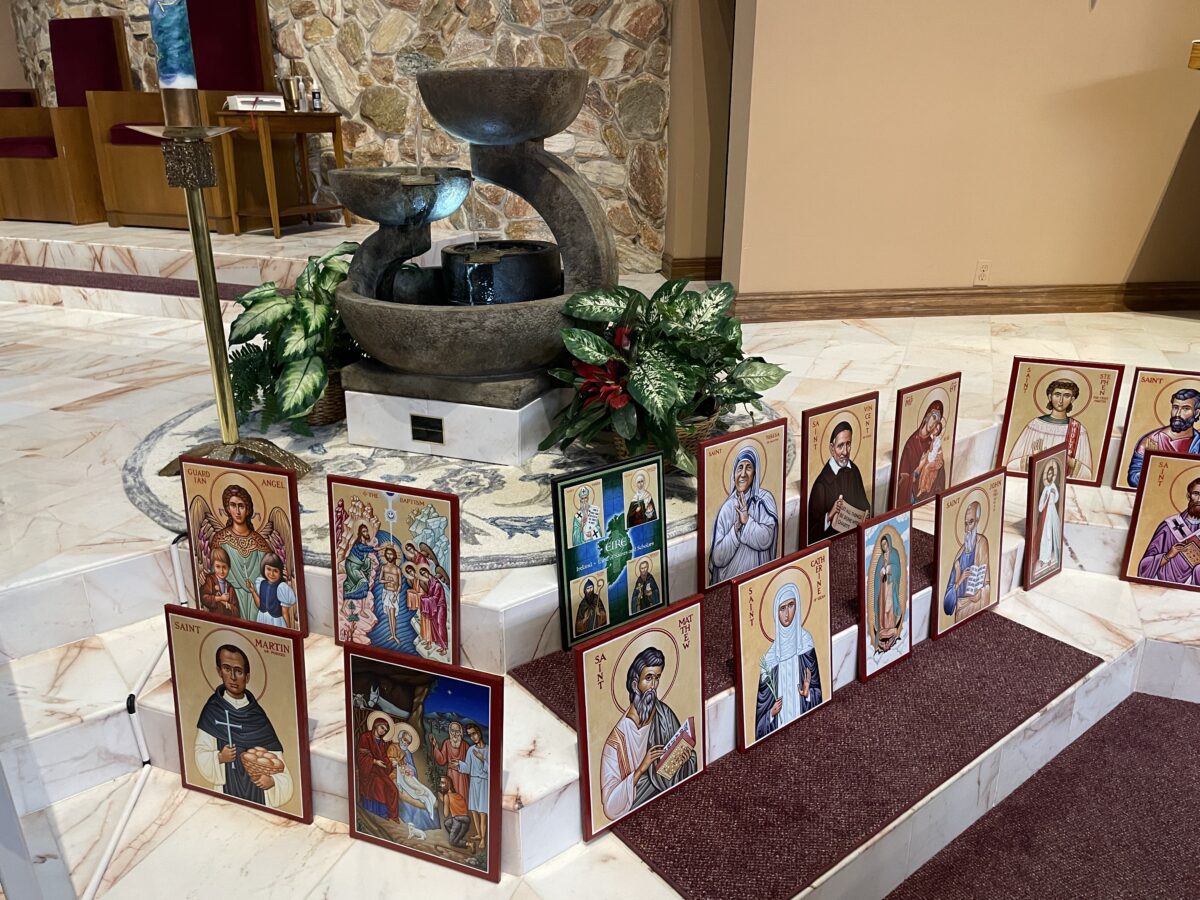 Parishioners at Immaculate Conception Parish, Melbourne Beach, purchase new icons, dedicating each in memory of a loved one or offered in prayer. (COURTESY)

MELBOURNE BEACH | When Father Ben Berinti, C.PP.S, pastor of Immaculate Conception Parish began teaching a class on icons, he never imagined the faithful would embrace it so wholeheartedly. Not only did parishioners find beauty in the ancient pieces, but thanks to their donations, the parish has obtained more than 65 icons to be displayed throughout the year.

Religious icons have been long-called “windows to heaven” says Father Berinti. “In this way, gazing upon our icons is a chance for us ‘to take a peek into heaven’. Also, the tradition of religious icons tells us that, at the same time believers look upon the icons in contemplation and prayer, it is really the saints, Jesus, Mary who are ‘looking’ at us.”

Ikon is Greek for “image”, he explained, relating to Gen. 1:27, “God created man in His image.” Explaining that icons are not painted, but “written,” he added, “Icons are akin to translation of Sacred Scripture. It is conscious copying and duplicating of long-established types.”

Father Berinti says people have really embraced the display of these religious icons, learned about the meaning and function of icons in the history of Christian art and worship, and love the opportunity to offer one to the community as a memorial for a loved one.

Among those parishioners is Donna Brown. Brown took Father Berinti’s 8-week class on icons several years ago and said, “It became quite an obsession of mine to learn more about it.” She noted, as a convert to Catholicism, she did not understand icons. “I kind of thought they were flat, dull, weird little pictures.” Father Berinti agreed this can often happen to the observer upon first look. He noted, “It can look sober, almost repulsive, distorted, stiff, lifeless, yet there is a holy, mysterious language to icons that must be learned before the true depth of understanding emerges… There is a minimum of detail making them relatively austere images, hinting at the beauty of the kingdom of God.”

He taught, “Icons are art and prayer combined – a set of traditional, technical rules evolved by the Eastern church, faithful to the Sacred images…” He says they are traditionally unsigned so as not to express their own artistic creativity.

The more Brown learned, the more fascinated she became. She even “wrote” one herself, which she kept. She hopes to write more and give them to those close to her. Her pastor is on her list.

When Father Berinti offered an opportunity to donate icons to the parish, she seized the moment, donating St. Bernadette at the Grotto of Our Lady of Lourdes in memory of her late husband, Christopher, who died in 2002. The feast of St. Bernadette falls on his birthdate. She also donated Jesus the Teacher dedicated to her father, mother, and older brother “because they were my teachers,” she said.

The icons are a mixture of saints, scenes from the life of Christ and the mysteries of faith (Resurrection, Baptism of the Lord, Last Supper) and of Jesus, and of the Blessed Mother Mary, under her various titles. The seemingly static images are each “an ending in itself”, he noted. But they assist the observer “in going beyond what can be seen or experienced with our physical senses. They consciously avoid movement or theatrical gesture so as not to get in the way of connecting with God and sacred realities.”

He added, the “highly stylized, almost a frozen images are calmed by God‘s presence within and around them.” The eyes dominate as they are “windows to the soul.”

“Visual art has a way of touching the mind and heart that not only leads to deeper prayer, but also brings beauty into the life of those who pray with these icons,” Father Berinti noted. “Our world, so full of ugliness, is always in desperate need of more beauty, and so I believe our church environment should provide for beautiful things in our worship.”

He hopes the icons will enhance the worship and prayer environment in the church. “Good art draws people into an expression of faith that words alone cannot do.” Brown agrees and treasures her time painting one. “It is one of the most religious experiences I think I’ve had. You get to get up close and know Christ in a whole different way,” she explained.

The icons are placed on two rear walls of the church and have a votive in front of them. Since the collection is so large, the intention is to rotate the 20 on display every month or so. In addition, they will place an appropriate icon in the sanctuary on a particular saint’s feast day, or on a feast day of the Lord or Mary.

One parishioner summed it up well. “It is like a display of our ‘family album’ when we look at the faces of the saints, our Lord and Mary depicted in the icons.”

By Glenda Meekins of the Florida Catholic, April 27, 2022