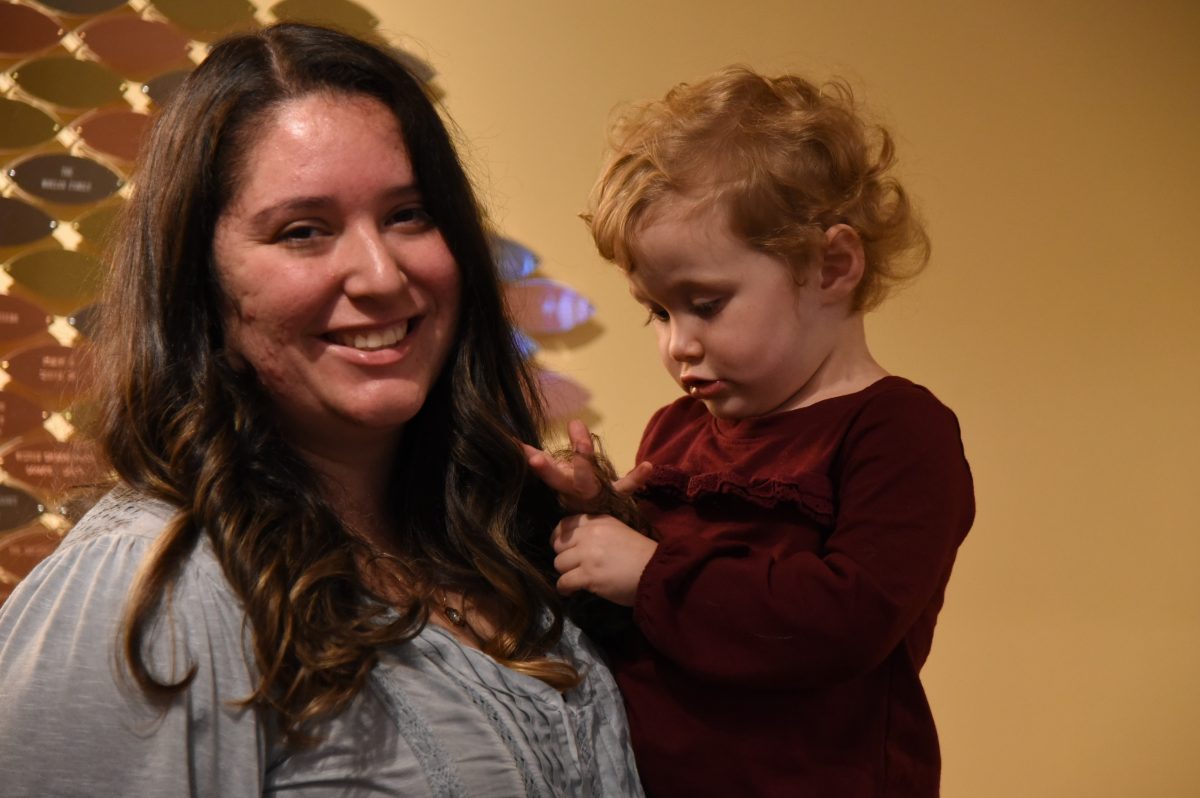 Erin Myler carries her daughter during the celebration of the Mass on her birthday, after consecrating herself to St. Joseph. (GLENDA MEEKINS)

INDIALANTIC | “The time of St. Joseph is now!” said Pastor of Holy Name of Jesus Parish, Father Scott Circe to an estimated 175 parishioners. It was March 19, the Solemnity of St. Joseph and the final evening of their consecration to the “Guardian of the Church”. Among those gathered was Erin Myler. At another time in her life, she would not have considered the 33-day commitment, but when invited to participate, the busy mother of three felt God called her to do so.

Commemorating the 150th anniversary of the declaration of St. Joseph as Patron Saint of the Universal Church, Pope Francis declared the Year of St. Joseph beginning Dec. 8, 2020 – Dec. 8, 2021. To honor the saint, Holy Name of Jesus Parish, and many other diocesan parishes, committed to offer parishioners a chance to make the special consecration to him as an intercessor. Myler was ready. She said she felt “all the dots were connecting.” Since her conversion to Catholicism in junior high school, she loved St. Joseph. Her parents divorced when she was young. She and her siblings struggled. When she learned about this man who took on the responsibility of caring for our Lord and Mary, she was instantly attracted to him and the Holy Family. The fact that his feast day fell on her birthday helped. She even named her youngest son after him.

As she prayed the Litany of St. Joseph, she began connecting to certain words: “just”, “chaste”, “prudent”, “courageous”. “I learned a lot, especially related to learning about God’s love and His love for family,” she said. “As foster-father of Jesus, Joseph laid down his life in obedience to God. He had all the courage to do this for Jesus, despite the impact to his reputation.”

In his homily the evening of the consecration, Parochial Vicar, Father Thomas Pringle noted, “In accepting the Blessed Mother as his spouse, Joseph showed his faithfulness to God. As a result, he encourages us in our fidelity to the Lord.” He added, through his obedience, “we are inspired to be obedient to the voice of the Lord; to care for the family of God; and to defend the Church. In his devotion to chastity, Joseph teaches us the importance of faithfully living out our vocations and the role of total commitment and gift of self to others.”

Myler can relate. In reviewing the corporal and spiritual works of mercy, she realized how uncomfortable she was with “comforting the afflicted.” About half-way through the consecration she had a friend who needed to talk. “Without reading about the Consecration to St. Joseph, I wouldn’t have had the confidence to have dealt with that situation,” Myler said. “I didn’t have to fix her problem. I just had to be there for her.”

In learning about the Sleeping St. Joseph and how even sleep can be a prayer, she prioritized taking care of herself and getting proper rest so she could be the best mother, wife, and friend she could be.

Although her three small children were particularly rambunctious the night of the final blessing and consecration, her husband, Aaron, faithfully honored her birthday wish. The couple brought the family to church in their signature “wagon” and headed for the “cry room”. Despite the distraction, Myler was grateful to be there.

In closing, Father Circe prayed, “May this consecration be a ripple effect throughout our lives, through our families, our Church, throughout our world and that the domestic Church may be strengthened by Jesus, Mary, and Joseph. May we also play our part, in grace with the universal call to holiness.”