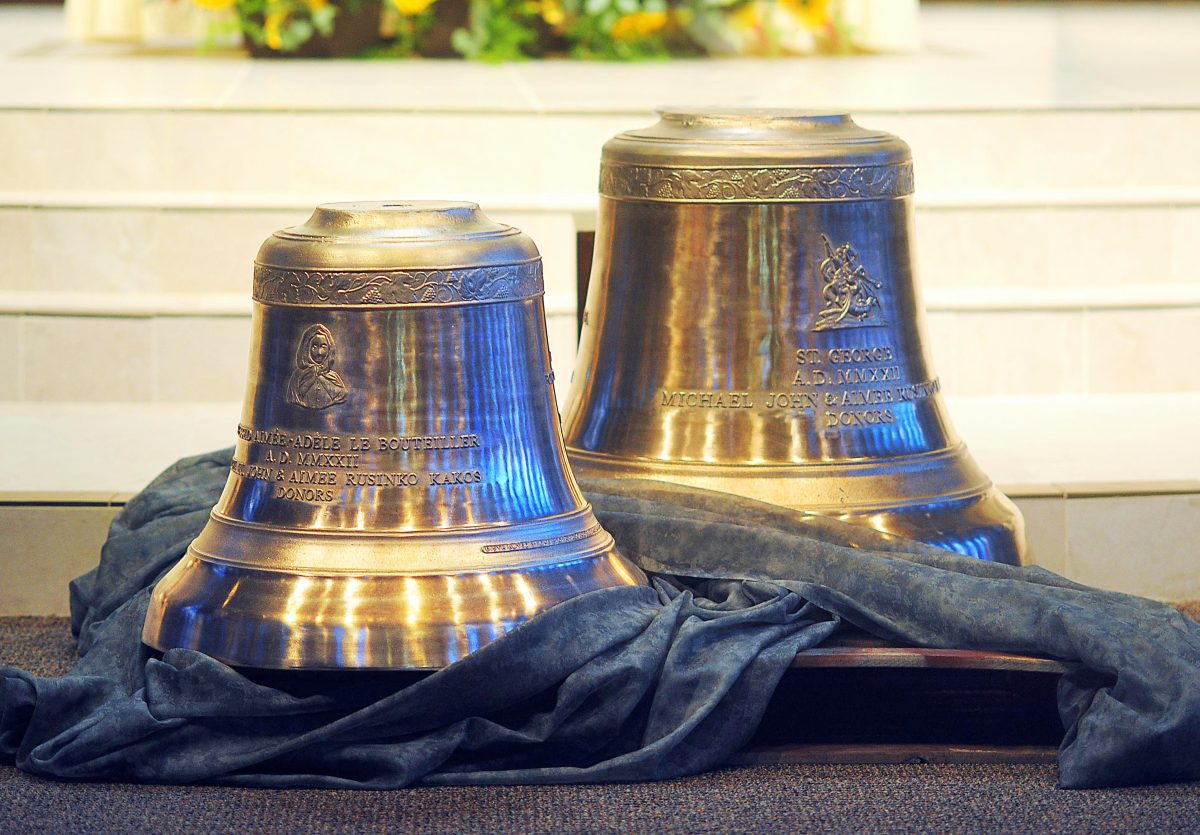 WINTER PARK  |  It was hard to miss the two massive bells set at the foot of the sanctuary at St. Margaret Mary Parish in Winter Park.

Weighing more than 1,000 pounds, they are made of solid bronze, and complete the five-bell Gloria in excelsis Deo peal. The peal is taken from a tune of the opening words of the Gloria chant, In Festis Apostolorum.

A bell tower became part of the parish during an expansion in 2015, and the first bell was made possible thanks to funding from Michael and Aimee Kakos. For Aimee, the bells go back even further in her life. She grew up in rural Pennsylvania and heard all the bells from the churches in the nearby communities at noon. The couple lived for 46 years in London and traveled where bells were frequently heard, so they wanted Winter Park residents and parishioners to experience the same wonderful music.

Few churches today have real bells. Instead, they are most often electronic with a microphone that projects a ringing sound or music. Only a handful of parishes in the diocese have actual bells. The use of bells was endorsed in 640 by Pope Sabian.

Two more bells were added since 2015, and most recently, the Kakoses donated the final two bells.

“For the residents (of Winter Park) who are not Catholic, it makes the church a keystone in their city,” Michael said, adding he believes the bells will further serve to unite the tightknit community in a call to prayer.

The set of five bells allows for a greater variety of peals to be played, according to associate director of music, Mark Duvall.

“Once the five bells are ringing, we will determine what tunes we are going to play and when,” Duvall said. “There might be in Marian hymn played before the Angelus and perhaps a different tune in the morning and a different one in the afternoon.”

During his homily at the blessing, Bishop Noonan mentioned his own experience growing up in Limerick, Ireland where church bells rang, especially at noon and 6 p.m. to signal the Angelus prayer. Noon was a time when workers stopped in the fields, to pray the Angelus. It was a memory Monsignor Walsh, also a native Irishman, was happy his parish would share.

As is tradition, bells are dedicated to saints. The first bell was named St. Margaret Mary Alocoque after the church’s patron saint. The second and third bells bear the names St. Michael the Archangel and St. Agnes, after Michael Kakos’s father and both Michael and Aimee’s mothers respectively. The fourth is named St. George after Aimee’s father and late brother, while Aimee shares the namesake of the fifth bell — named after Blessed Aimee Bouteiller.

The verse on the largest bell — St. Margaret Mary Alacoque — reads: “Come to me, all you who labor and are burdened, and I will give you rest. Take my yoke upon you and learn from me, for I am meek and humble of heart.” (Mt 11:28-29) St. Michael the Archangel’s inscription reads: “Thou shalt love the Lord thy God with thy whole heart…and thy neighbor as thyself.” (Lk 10:27) The bell dedicated to St. Agnes of Rome reads: “God is love.” (1 Jn 4:8)

The bells represent the legacy of a mission church dating back to 1924. It was elevated as a parish in 1947, and boomed with exponential growth. When the parish was canonically erected, St. Margaret Mary encompassed several cities and small towns: Apopka, Forest City, Altamonte Springs, Maitland, Casselberry, Lockart, Oviedo and Chuluota to name a few.

Monsignor Walsh, who has served the parish for 35 years, said he is most proud of the parish’s spirit of unity.

“We work together very well. Through the outreach programs, we’ve accomplished a lot over the years here in the parish, but also in Haiti, an orphanage in Uganda, and a little in the Dominican Republic.”

The parish also has several ecumenical programs in the community like “Bridging the Color Divide,” so much so that the city of Winter Park declared Oct. 16 St. Margaret Mary Day.

“St. Margaret Mary really promoted a devotion to the Sacred Heart of Jesus. It is a deep awareness of the life we are all called to — to render our lives to the Sacred Heart,” Monsignor Walsh said. “To endeavor to love the Sacred Heart as much as Jesus loved us. That is something we can work upon, and it is always in process. You are never fully there (in) your faith. … (Spirituality) is not just belief in the Sacred Heart, but a deeper awareness of it. I would hope that would continue to strengthen with the passage of time.”

By Glenda Meekins of the Florida Catholic staff, October 21, 2022