Seeing God in the midst of COVID 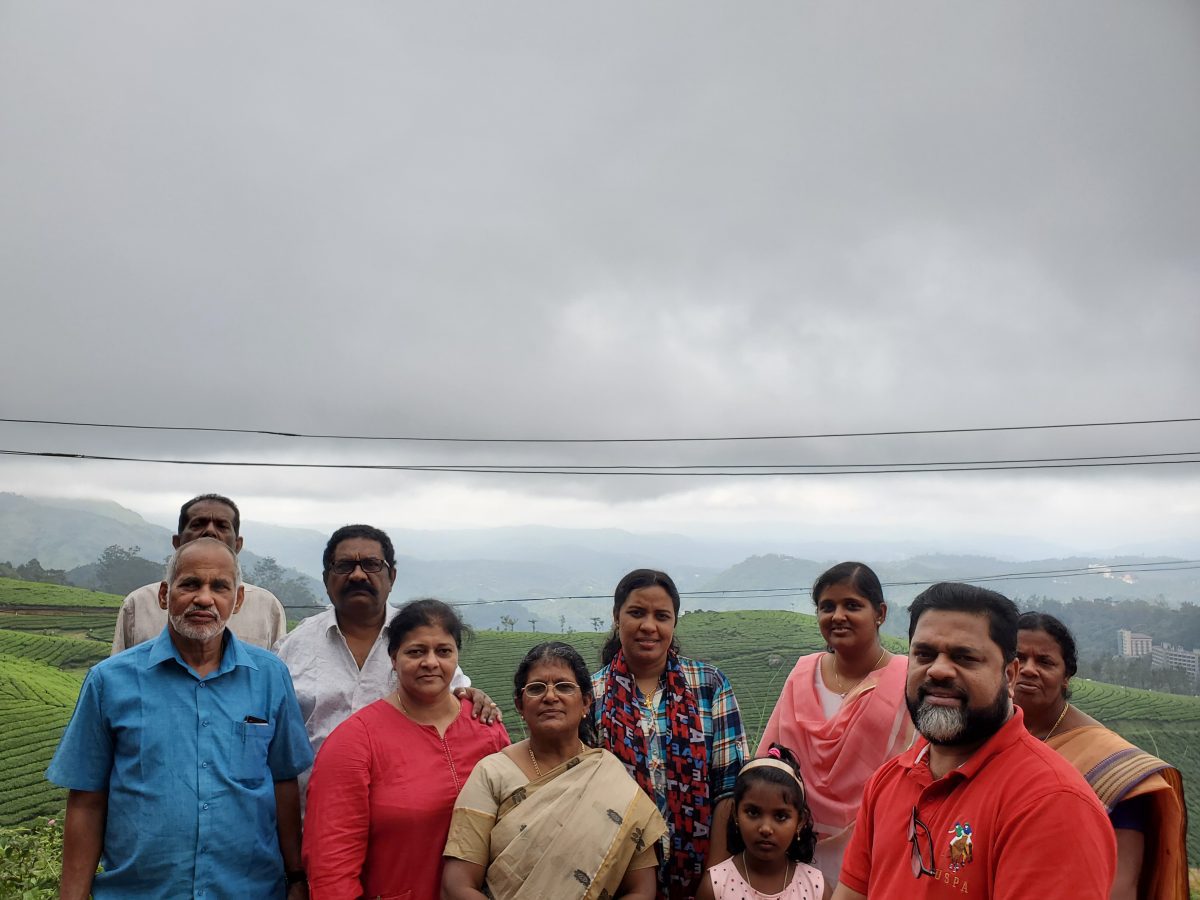 Father James Tharakan (front right), parochial vicar of Holy Family Parish, and his family in 2019. His brother George (second from left) is a COVID-19 survivor. (COURTESY)

ORLANDO | Father James Tharakan, parochial vicar of Holy Family Parish in Orlando was born and raised in the southern state of Kerala, India. The youngest of eight, he and his brother, George, are the only ones no longer living in Kerala. Until this past May, COVID-19 had not touched his family.

Father Tharakan’s brother, George, and his wife, Merly, travelled to Delhi in early April 2021 for their son’s wedding. In the resurgence of another Coronavirus wave, the couple was not allowed to leave. They became ill while awaiting clearance to return to the United Kingdom.

As usual, the family relied on regular calls to update each other on the situation. Father Tharakan, who has “a very special bond” with George, said it was an especially difficult time to be so far away. Merly recovered, but for a time George’s outcome was precarious at best. “He was almost on a ventilator,” Father Tharakan recalled. “(In Delhi) there was no place in the hospital. Somehow, a cousin who is a doctor was able to arrange a flight to Kerala where he could be admitted… That may be the reason he was saved,” he said.

“When my brother was in a critical situation, I really missed him,” he admitted. “I was really worried. At the same time, I had full trust in God that He was going to bring him back to life.” Father Tharakan said his prayers, and those of his parishioners at Holy Family and former parish of St. Margaret Mary in Winter Park, made the difference.

The ordeal was transformative. Prior to her illness, Father Tharakan’s sister-in-law was at odds with her faith. “She was not a strong believer,” he explained. “But after this, she is the strongest believer I have ever seen.” He recalled her displeasure when he became a priest and questioned the faithfulness of the Church. But her and George’s healing changed the way she saw God and his Church. “God is so gracious, and it is only through God’s grace and miracle this did happen,” she acknowledged.

For Father Tharakan, her encounter with God is one of the places where he sees the Lord’s presence. “God is in the midst of all the problems within us and He is comforting us,” he said with conviction. “He is telling us to look at the suffering He endured on the cross.” He imagines Jesus saying, “There you will find me having the same problems and pain you have. I too have undergone these. I reached the resurrection.” This message of hope and care sustains him. “Christ is there in us. We need to find a space for Him. He is always with us giving us consolation.”

He notes many of the Catholics in India are from Kerala and God is visible through them. Despite struggling with closures, the Church is “very active in distributing the food and things the poor need.” He added, “The Church is making the effort and leading most of the charitable works. That’s incredible.” It is a reason for thanksgiving.

While much of India recovers from multiple waves of COVID-19, Diocese of Orlando priests from Kerala find gratitude for their health and that of their families abroad. Among them is Father Sibi Kurian Velamparambil of St. Mary’s Syro-Malabar Parish in Sanford. None of his siblings in Kerala have become ill, but he notes more than 200 priests and almost as many religious have died from the disease throughout India. He says these are times to “increase prayer.” Father Velamparambil feels blessed to be spared and is glad things are slowly improving. He notes lockdowns are decreasing, now only Saturdays and Sundays in many parts. Churches are reopening slowly.

Yet the stress and concern for family is not foreign to him. To bare it he emphasizes the source of his strength. “I rely on God. This is a time to pray more and depend upon God… We have to rely upon the mystery of God, not our strength.”

Father Mathew Vettath Joseph, S.D.V, parochial administrator of St. Francis of Assisi Parish in Apopka affirms, “Many suffered because of COVID…” Still, he sees God, “in our prayers” as the Body of Christ comes together for a common cause. He adds, “And we are alive because of the grace of God.” He sees it as “a second chance God gives us to do better.” He notes, “Many people did not have that chance. It is a call for us all.”