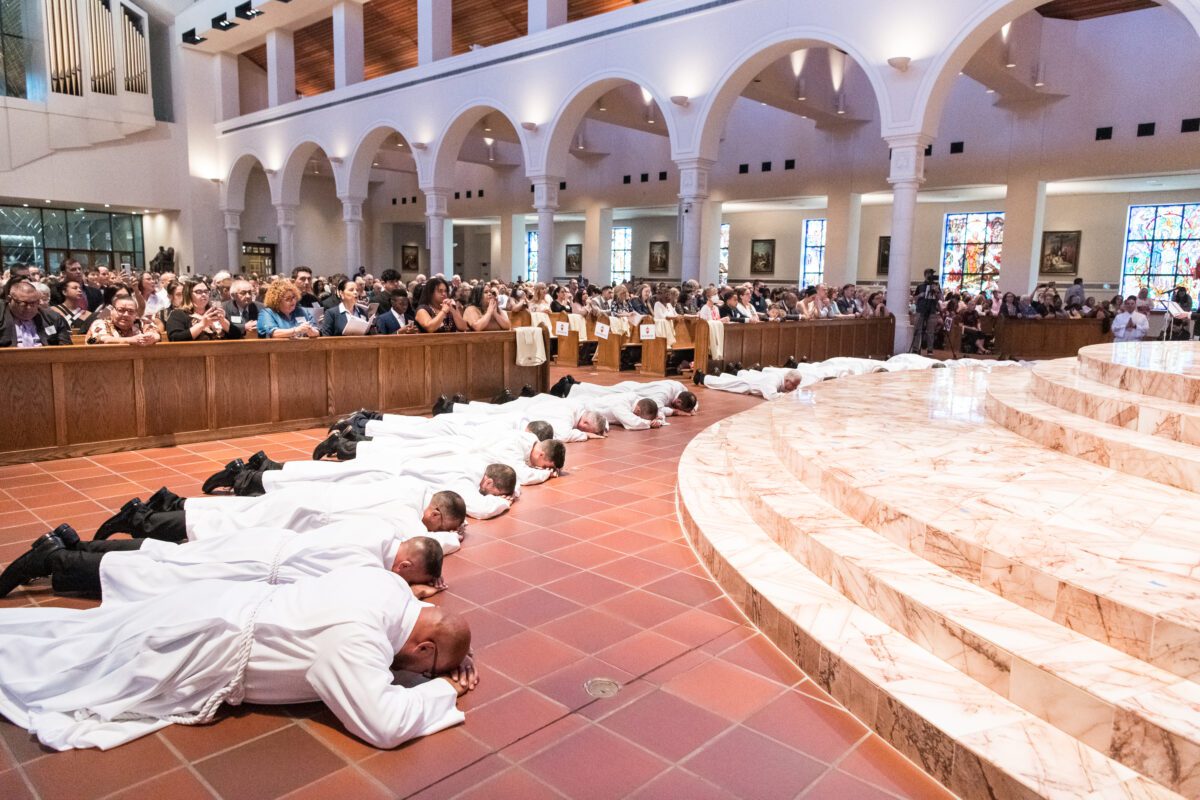 ORLANDO  |  Eighteen men entered the Basilica of the National Shrine of Mary, Queen of the Universe in anticipation and gratitude, June 11, as they prepared to be ordained permanent deacons. In his homily, Bishop John Noonan called the men “shining armors of our faith.”

Family, friends, priests, seminarians, deacons and religious who supported the men on their seven-year journey packed the pews. Their continued support will be necessary as they “will minister in a world of disbelief; a world that will persecute them for their holding fast to the Catholic faith; a world in which they will encounter derision for their loving one another as God loves us,” said Bishop Noonan. “Their service and the Eucharist are the summit of our faith,” he added.

Each ordinand was called by name to come forward as the bishop handed them the Book of Gospels. Bishop Noonan prayed, “Receive the Gospel of Christ, whose herald you have become. Believe what you read, teach what you believe, and practice what you teach.” He said these words are the foundation of the ministry of the permanent diaconate.

He added the men should be open to God’s messages through constant prayer. They should listen to the Lord’s prompting and work together with priests as is noted in the Acts of the Apostles. Bishop Noonan focused on the need to work together in order that “marvelous things” may happen to create a “true humanity of faith.”

Quoting Pope Francis’ address to the deacons in Rome, Bishop Noonan reminded the men, “Power lies in service to others.” And like the deacon, Pope Francis stated, “(Deacons) bring God’s closeness to others without imposing themselves, serving with humility and joy.”

After Ordination, Deacon Kelvin Barbarena said the most significant moment was when he felt Bishop Noonan place his hands upon his head. The moment had become a part of a “2,000-year tradition” of ordaining men to the diaconate.

Deacon Jairo Rosario, from St. Ann Parish in Haines City, said he became aware of the seriousness of this calling during the celebration, not only for him but for the entire Church. His wife, Lydia, acknowledged her joys, questions and even doubts during the seven-year journey. Yet, she found peace after a priest who is a close friend of the family reminded her, “This is a spiritual process and path. You must walk it in faith and with the Holy Spirit as your strength.”

Deacon Joe Bellissimo, of the Basilica of St. Paul in Daytona Beach, described the day as “unbelievably joyful,” and said, “the happiness is palpable.” Although he couldn’t find words to fully express what he and his brother deacons were experiencing, he said with “undeniable certainty” they were all committed to living out their vocation.

Prepared to live out their vocation, the deacons are assigned to:

By Glenda Meekins of the Florida Catholic staff, June 15, 2022