Sights and Sounds of Lent 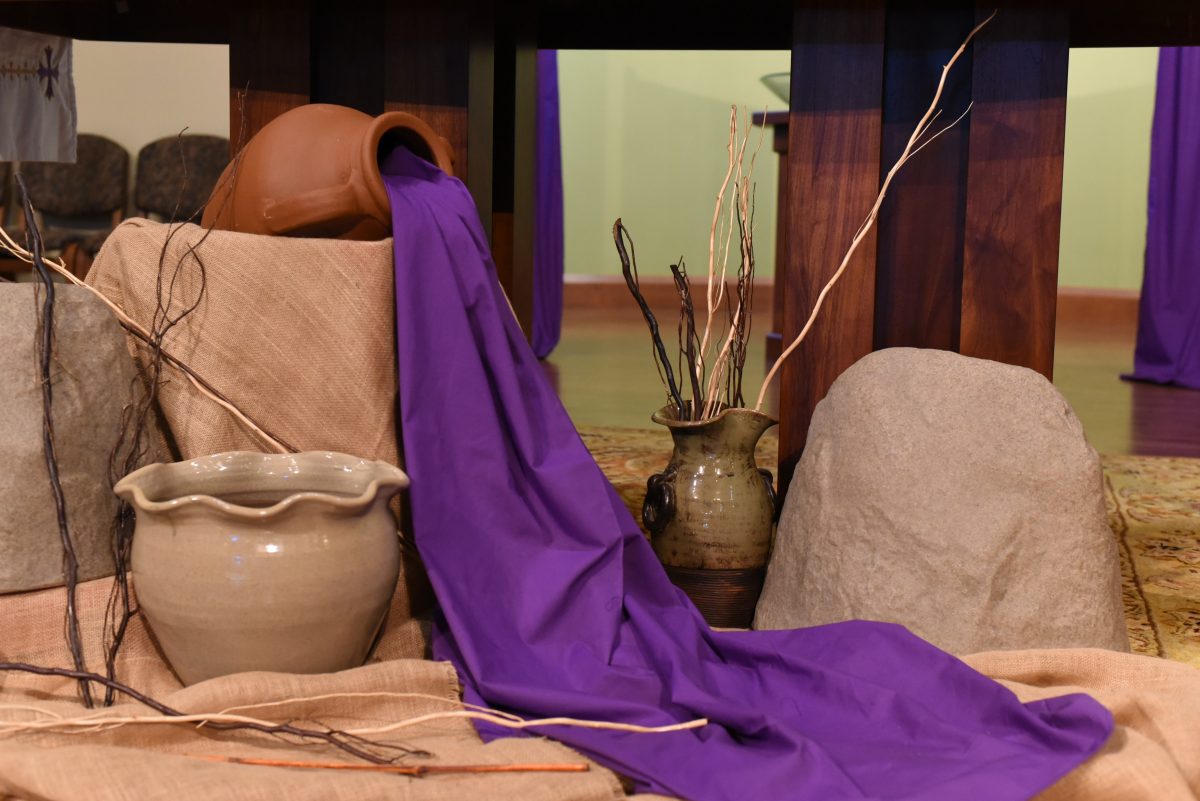 Most Precious Blood Parish sets the scene for Lent. Chris Hernandez, director of liturgy explains burlap fabric is a rough material representing sackcloth. The Hebrews wore sackcloth as a sign of mourning or repentance. Rocks and twigs remind us of the desert where Jesus fasted and prayed. Empty pots and vases symbolize the emptiness we feel without Christ. These invite us into a quieter space, allowing for a deeper reflection on the season of Lent, drawing us closer to Christ’s suffering, death, and joyous Resurrection. (GLENDA MEEKINS)

ORLANDO | As I entered my parish on the first Sunday of Lent, I was struck by the beauty and simplicity of the environment. Immediately I was transformed in this sacred space of reflection, calling me to empty myself out and allow the Lord to penetrate any hardness within me that presented a barrier in receiving and giving the love God has poured out. I was surprised when we left in silence. What my eyes could see flowed through the Mass to its conclusion, even as I walked to my car. According to Bruce Croteau, director of liturgy and music for the Diocese of Orlando, the task of art and environment ministries is, “Make whatever you do truly worthy of the heavenly realities we are trying to invoke.” That is a tall order, but the Church does not leave us without guides. 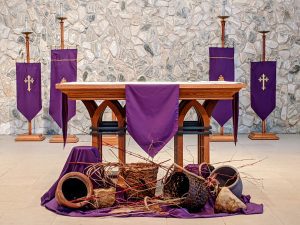 “Churches are never ‘simply gathering spaces but signify and make visible the Church living in [a particular] place, the dwelling of God among us, now reconciled and united in Christ,’” explains Built of Living Stones: Art, Architecture, and Worship Guidelines of the National Conference of Catholic Bishops. But how do art and environment ministries do this effectively?

Father Tomás Hurtado, pastor of St. Augustine Parish in Casselberry agrees saying, “The environment goes to the heart of what Lent intends – a life of simplicity.” He described the scene in St. Augustine’s sanctuary, based on the Holy Scripture, Genesis 2:7 – “Then the LORD God formed the man out of the dust of the ground and blew into his nostrils the breath of life, and the man became a living being.” “The clay pots signify our lives as God’s creatures. They are empty, dry, lifeless, because during Lent we must empty ourselves of our sins so God will fill us with new life when we will celebrate Easter,” he said. He noted the proximity of the clay pots to the ambo and altar “because to change we must fill ourselves with the Word of God and with Jesus, the Bread that gives eternal life.”

Built of Living Stones asserts, “Liturgical art and architecture reflect and announce the presence of the God who calls the community to worship and invites believers to raise their minds and hearts to the One who is the source of all beauty and truth. Art or architecture that draws more attention to its own shape, form, texture, or color than to the sacred realities it seeks to disclose is unworthy of the church building.” This implies a delicate balance. For this reason, parishioners may see statues covered, so as to not detract. Croteau notes in churches that are more ornate and replete of art on the walls, the goal is not to cover up the art. He suggested, “enhance what’s there” rather than come up with anything new. At St. James Cathedral in Orlando, he simply added a narrow purple fabric on the columns separating the paintings behind the altar.

Lisa Weis, director of liturgy at St. Margaret Mary Parish in Winter Park affirmed, “We’re invited to celebrate the Sacred Mysteries at Mass and… our environment is crucial to our celebration because it can help draw people deeper into that mystery…it can offer a tangible image to anchor the intangible in our minds and hearts. Whether it be by an emphasis on the color of the season, by the starkness or abundance of the environment, or even by the subtle invitation to further contemplate what the environment symbolizes to us in relation to our own lives.”

The sights serve to lift our gaze to heaven, but the music does as well. You may have noticed the Gloria and Alleluia omitted from the liturgy during Lent. Croteau explains Lent is a penitential season of preparation. Removing the Gloria “is a kind of fasting. It’s a period of simplicity and austerity.” There are exceptions. The Gloria returns for Solemnities during Lent, such as the Solemnity of St. Joseph on March 19, unless it lands on a Sunday, then Sunday of Lent takes precedence. The Gloria resumes Holy Thursday at the Mass of the Lord’s Supper. As for the Alleluia, it is the “Easter song”, so we refrain from it during Lent, until the Easter Vigil.

Although much is stripped away in the liturgy during this time, the Ceremonial of Bishops, a directory for liturgies with the bishop, is clear regarding singing. Noting the ambo and altar should not have flowers during Lent, it adds, “the use of musical instruments is allowed, but only to support the singing.” In other words, instruments should not be the focus. “The beauty of that is it says there needs to be singing,” says Croteau who says he likes to see singing as a language of its own—“a special language that God hears in a different way when perfectly married to sacred text.” This information from the Ceremonial of Bishops applies to all liturgies during Lent.

He notes, “You are doing something at a higher awareness, a higher level. I like to think of music as a language that we have absolutely no idea what power it has and why the Bible and the Scriptures tell us so much about why we have to sing.” He adds talent is inconsequential. “Singing comes from the soul and is vulnerable. God asks us to lay ourselves bare.”

The important thing to remember, Croteau noted, is the environment should reflect a “noble simplicity”. He said environment and music ministers should ask themselves, “How does this reflect the hue and feeling of Lent?” He reminds these ministers, “Make whatever you do truly worthy of the heavenly realities you are trying to invoke. At whatever level, your community can do that, as long as it’s done with the best you can offer.”

By Glenda Meekins of the Florida Catholic, March 4, 2021