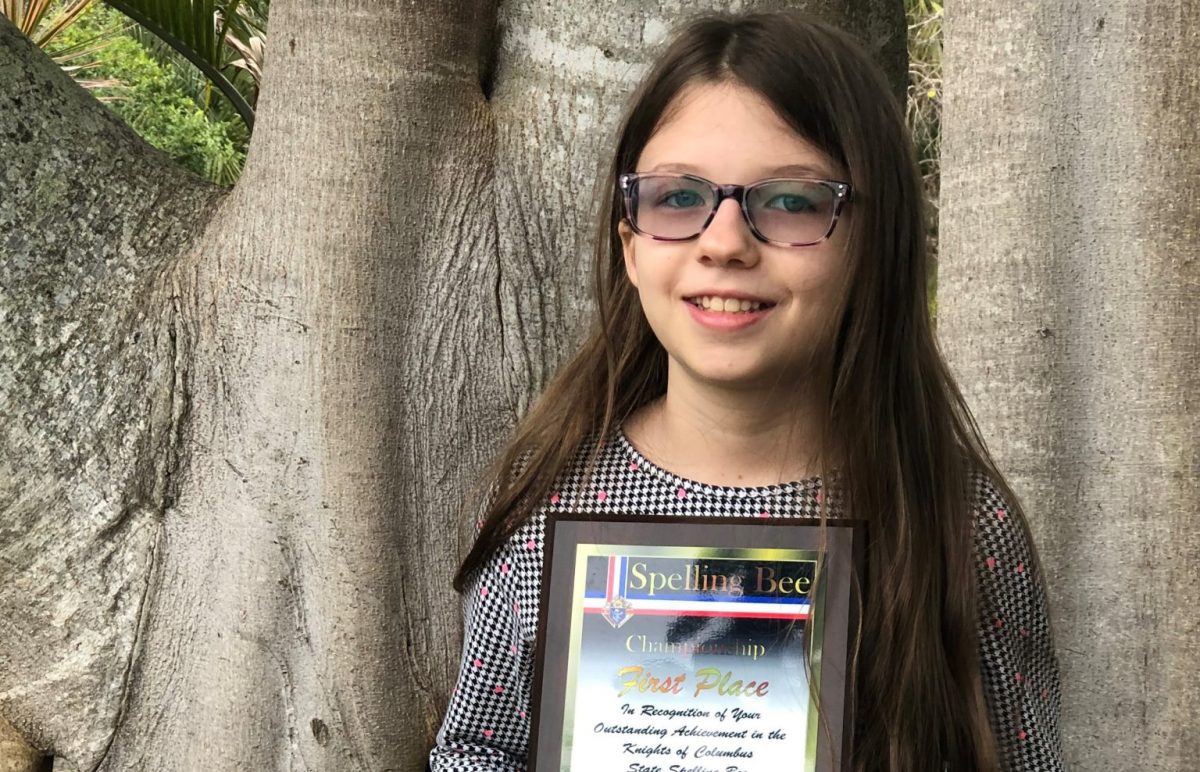 Vivienne, a 6th-grader at St. John Vianney Catholic School in Orlando becomes Knights of Columbus Spelling Bee champion for the second time. She continues a legacy begun by her two older brothers, Trevor and Alec. (COURTESY)

ORLANDO | A sixth grade student at St. John Vianney Catholic School continues her family’s legacy of being state champions at the Knights of Columbus State Spelling Bee. Vivienne T. took the win for the second year in the 5th-6th grade language category, Feb. 6. The annual event is meant to applaud youngsters and their intellectual growth.

Following in the tradition of her brothers Trevor and Alec, St. John Vianney graduates in 2012 and 2015 respectively, Vivienne said the siblings inspired and encouraged her. “I spent years watching them at Spelling Bees waiting for the day that I’d be up there myself!” she recalled. As for her brothers, they were proud. “It was great to see our usually shy sister coming out of her shell and competing,” Trevor said.

The 6th-grader faced some tough competition. Beginning with seven candidates, it took 20 rounds before the contestants were reduced to two. From that point, it went 34 rounds before her competitor missed a word. Vivienne then spelled that word correctly, plus the next word (her 51st word of the day) to emerge the winner. Spelling “toboggan” and then “pardon” sealed the deal. Although she felt the pressure, Vivienne said the hardest part was “getting up there to spell the first word.” She said she prayed she would do well.

Her mother Jan indicated Vivienne spent five months preparing. Her father, Rod, compiled word lists from various sources online and threw in some of his own. He reviewed meanings for words Vivienne didn’t know, pronunciation, and grammar rules. Her parents even gave her tips on saying the words clearly and spelling slowly in competition. Jan noted Vivienne “even practiced with a microphone a couple of times to get used to that. And this year, speaking clearly through a mask.”

Vivienne’s religion teacher, Juliett Perez, said her student’s success reminded her of the verse from 2 Timothy 1:7, “For God did not give us a spirit of fear, but of power and love and self-control.” The verse reminds her of Vivienne’s faith and fearlessness. Perez said, “She is her own person and doesn’t try to be like others.”

By Glenda Meekins of the Florida Catholic, February 17, 2021