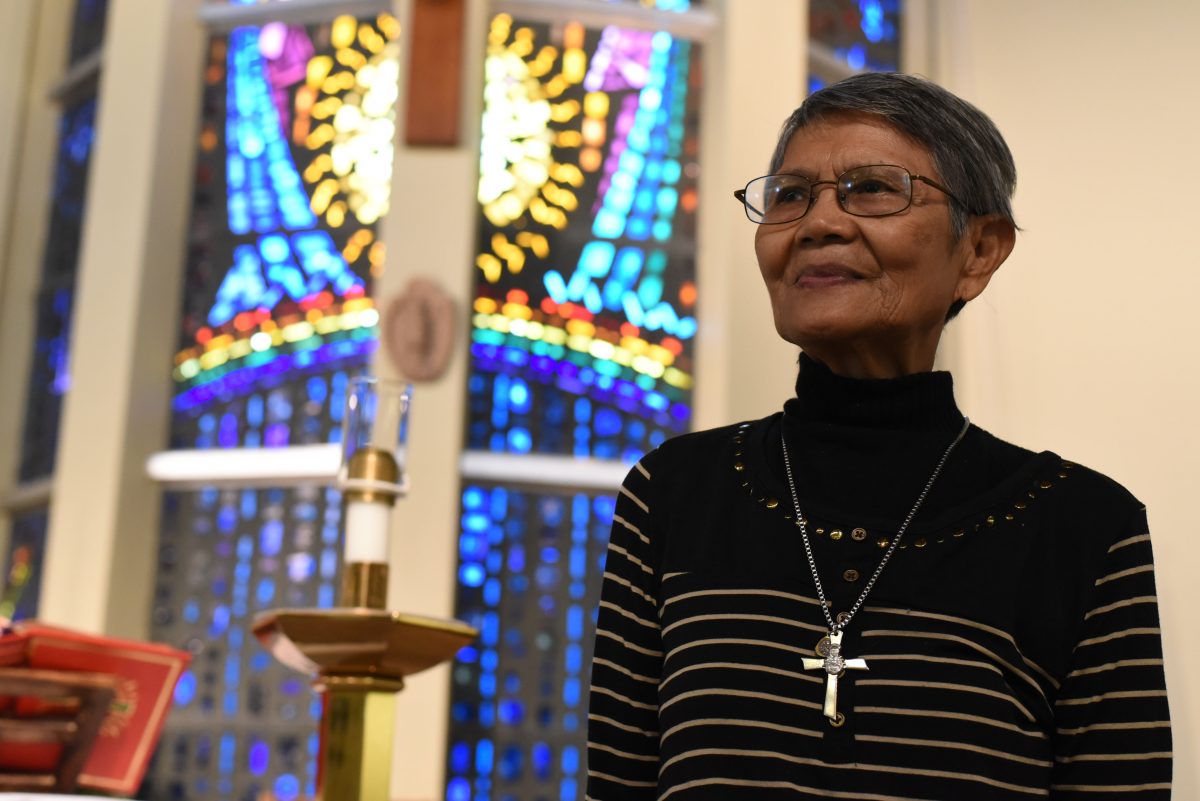 ORLANDO | Sister of Providence of Montreal Deling Fernando was 8 years old when her sister asked her to go next door to retrieve a coconut grater lent to their neighbor in their hometown of Laoag City, Ilocos Norte, Philippines. It was early on a Saturday morning. Upon entering, their poverty struck her. Two children were crying – their parents still asleep. “I realized they were starving,” she recalled. Rummaging through the kitchen she found left over rice, mixed it with water and coconut oil and fed them. “They were very happy.” The two hugged her tightly. It was in that moment she said, “God, if you want me to be a sister and help out your kids like this, take me.”

She finished Catholic high school at age 15 and recalls, “I wanted to be a sister so badly.” She looked into several orders, from the Benedictines to the Carmelites, and the Sisters of the Divine Word where she went to school. All the communities told her she was too young. Pursuing college with an unquenched desire to serve, her father’s words echoed her longing, “God has created all to become saints with His grace. Our purpose and life is to glorify God.”

Orphaned at age 4, she set out to study Spanish to be a teacher, like her mother. All the while, a “desire was burning” within her. She was 17 when she went to visit her cousin, a seminarian. Unable to attend to her, he gave her a Franciscan magazine. “It was providential,” she said. “It was a windy day and pages were blowing everywhere. Then they fell open to a list of all the religious orders in the world.”

Taken back to the moment, she closed her eyes and circling her hand in the air, dropped it down and pointed to a name on a page in her memory – the Benedictine Sisters in Philadelphia. She wrote to them and the Sisters of Providence in Spokane, WA (as a back-up). The first again said she was too young. The latter shared information about the order and their ministry – to care for the poor. They welcomed her as a scholar in their university. Vividly remembering her departure from the Philippines, Nov. 16, 1957, her small figure (not quite 5 feet tall) became effervescent. She entered the novitiate as the first Filipino and the youngest, with a secret desire to one day establish the order in her native country.

With master’s degrees in education and theology, she spent two decades serving rural parishes throughout Montana, Idaho and Washington, sometimes serving as a principal for schools in impoverished regions.

In 1988, her provincial, noting Sr. Fernando’s restlessness, asked what was on her mind. She shared her dream of expanding the order to the Philippines. With her help, it became reality in 1989.

Five religious were sent to establish the order and Sr. Fernando came to Florida, reuniting with her brother, diocesan priest Father Bernard Fernando. She served at Holy Redeemer, in charge of Sacramental preparation for Baptism and Marriage, and provided assistance with annulments. She helped the late Father John McCormick raise funds to build the school until her order sought her assistance in the Philippines.

She joined her Filipino sisters who were then working in parishes. When she arrived in 1995 she found, “People were living under the bridge. We helped them in their education and began a foundation for scholarships.” As provincial, principal and vocation director, she grew the community. Their mission continues today.

Now semi-retired she volunteers at Holy Redeemer in formation of young adults and travels with her brother, assisting where needed. Even after 60 years as a religious, she says, “I don’t have any idea what it means to be a sister. Just to serve our God. As you get older, all the wisdom and knowledge that comes to me is the memory of my father saying, ‘Our life here is to become holy, to become saints.’ I realize as I grow older, that religious life is a means to an end. Being a sister is helping me again and again to become the person God wants me to become.”

She added, “In my vow of poverty, chastity and obedience, I am free to pray, to have an encounter with God in a really different way. It’s more of a holiness we all strive for.”

She acknowledges her life as a religious as a grace, noting her grandmother consecrated her and her brother before birth. Sr. Fernando explained her father, Mariano, desired to become a priest. As her only child, his mother asked him to reconsider. She told him, “If God wants you to be married and have children, I pray that if you have a son, he becomes a priest—and if you have a girl, that she become a sister.” Their faith continues to bolster her. She said, “I am discovering more and more who God is in my life and who I am before God.”