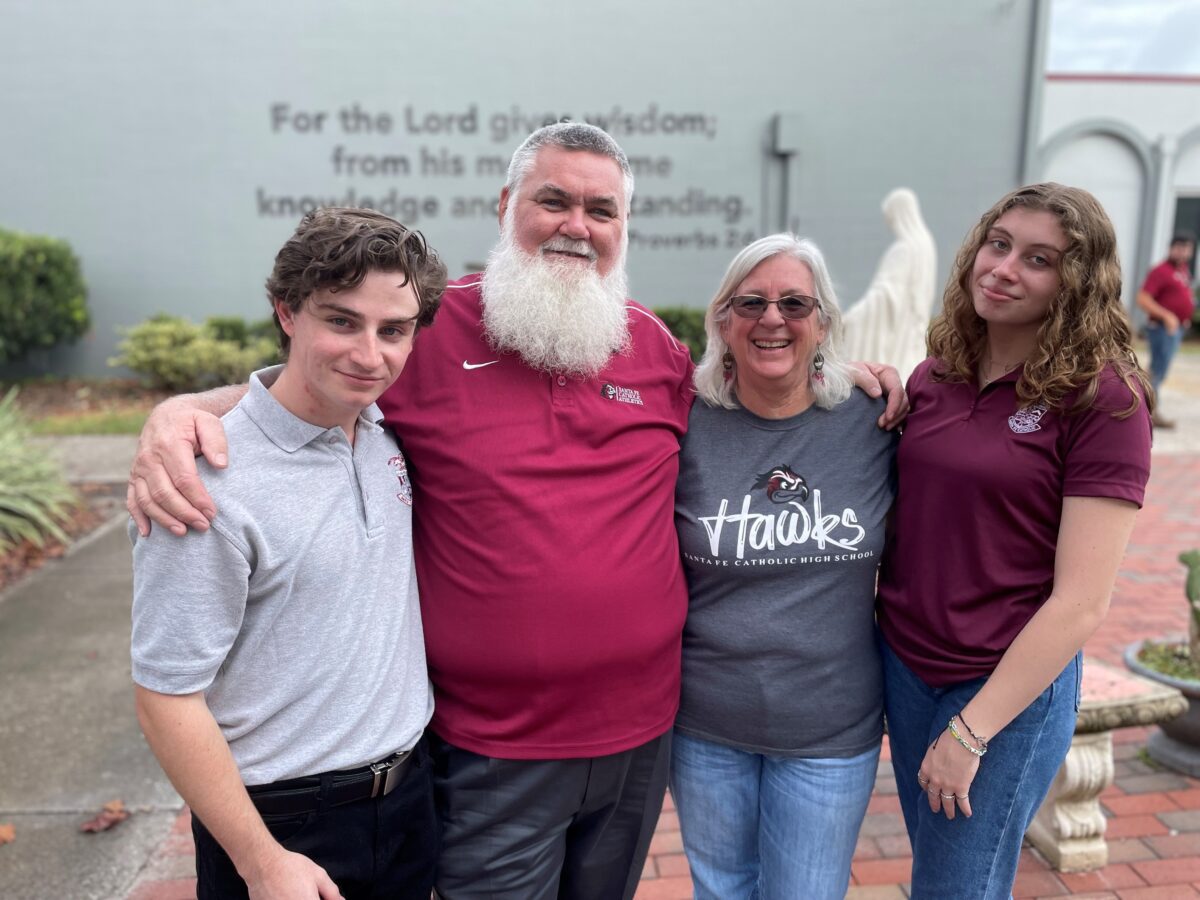 Senior Santa Fe students, Sean (left) and Angelena (far right) stand with their religion teachers, Dan and Margaret McGowan on campus. The McGowans encouraged the students to share their lack of housing stability story with the Polk Ecumenical Action Council for Empowerment (PEACE) organization to foment an increase in affordable housing in Polk County. Their speech garnered elected officials support and moved them to action. (MARIA DEL AMO | FC)

LAKELAND | When Dan and Margaret McGowan, religion teachers at Santa Fe Catholic High School, learned two of their students were struggling with homelessness, the long-time members of PEACE (Polk Ecumenical Action Council for Empowerment) urged them to share their stories in the hopes of advocating for an increase in affordable housing in Polk County.

Sean and Angelena, seniors at Santa Fe, agreed and, for the first time, went public with their stories at a gathering of almost 1,000 PEACE members at a local drive-in and via Zoom. The PEACE website defines the group as “a direct-action grassroots organization working to effect institutional change on a variety of community issues by influencing public policy.” Sean and Angelena’s talk secured changes that will impact Lakeland and Winter Haven generations for years to come.

Sean was five years old when his parents divorced, leaving the family with one income. “You have a normal middle-class family. And then a financial drop,” Sean recalled. “Over the course of about five years, we ended up below the poverty line.”

The youngest of five, he remembers early on “moving a lot, very little food, and everything was always packed.” He likened his “nomadic life” to living in a caravan. Then his family moved into a rough, “very violent neighborhood with a lot of drugs.”

“I have a vivid memory of not eating for five days and only having water, which kept me going. I was maybe 7 or 8. There was a period when we were all really, really hungry,” Sean recalled, adding his sister “rejoicing” over a bag of stale, ramen noodles she found in a trash can. “It wasn’t even a neglect thing. We were just all struggling badly.”

Eventually his family moved into a small apartment in the city, but there was not much improvement. Sean quickly knew where things were headed. “By that point, I had some sense of how my family was… That if I stayed it wouldn’t be good,” he said. At age 14, he decided to move in with his aunt who enrolled him in St. Joseph Academy in Lakeland. Two years later, he moved in with his brothers.

He told no one until last spring when his religion teachers, Dan McGowan and his wife, Margaret, asked him to speak at PEACE. He was reluctant and almost said no. Up until then, he admitted he lied about his situation “so no one would think anything of it. I just didn’t want the attention,” he said. Although reluctant to be a poster child for a cause, he finally conceded. “I think being honest about it will make me be honest with myself,” he said. “And regardless of what people believe, it is an undeniable fact that we all have dignity. So, I didn’t mind helping. I felt a little honored.”

“Giving the speech kind of flipped a switch in my brain,” Sean said. “I just can’t stop there. It’s one thing to do this in Lakeland or Winter Haven, but I need to keep going.”

His classmate, Angelena, can relate. “As far as I can remember we’ve always been poor,” she said. She added finding a home after one’s credit score has fallen, despite having money in hand, is also a problem.

The school has helped her family with free lunch, tuition and more, but she says, “There is only so much they can do,” emphasizing her immense gratitude for the school staff. “They’re always there if you need them. They make me feel like I have a safety net to fall back on.”

Although still homeless, bouncing from place to place, she said speaking that night before 1,000 people at the Silver Moon Drive-in and via Zoom changed things for her family.

“Me speaking at PEACE was a really pivotal point in all of our lives,” Angelena said. “It showed my siblings, you can do something about this. You’re not stuck. You have a way. You do have a voice. You can be heard. And I hope other people understood that as well.”

She, like Sean, sees herself having some sort of future role in advocacy. “I don’t know where I will be, but I know I want to be in a position to do more for more people,” she said. 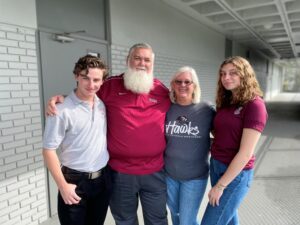 For Margaret McGowan, it all comes down to Micah 6:8 – “And what does the Lord require of you? To act justly and to love mercy and to walk humbly with your God.” She said when she and Dan learned that more than 5,000 students in Polk County were also experiencing housing insecurity, they knew their students’ voices could make a difference. “In sharing their stories, they were able to live out their call to do justice, and to build the Kingdom of God,” Margaret said, adding how PEACE gave Angelena and Sean “a voice, as teens, to speak out for change, for themselves and others.”

Margaret said the teens’ willingness to share their stories helped secure a commitment from both Lakeland and Winter Haven’s mayors and city councils to build affordable housing units for housing insecure children and families.

Lakeland previously committed to building 600 units and 75% of those are complete. Mayor Bill Mutz is accelerating the deadline for completion and agreed to increase the city funds dedicated to affordable housing to a minimum of $750,000 this year.

Winter Haven committed to building  150 units by 2023, but has not broken ground on any as of yet. At their September council meeting city officials did secure more than $1 million for two Winter Haven affordable housing projects. Looking back at that night at the drive-in this past spring, Angelena said she was shaking, scared and nervous to stand up and share her testimony. But standing there before 1,000 people sitting in their parked cars, she started talking. And it made an impact on her and, to her surprise, on others, too.

“I thought, ‘This is my truth and what I want to say. It’s what I have to do and I’m going to do it,'” she recalled. “A lot of government officials see this stuff happening. They see these people suffering and don’t do much about it or don’t do what they should. But just to get recognized and have these laws and bills being passed because people are speaking up – it’s such a beautiful thing.”

Henry Fortier, superintendent of schools, said he has much pride in the students, and acknowledged the Santa Fe Catholic High School community “for the faith-filled environment that has formed these students to be so courageous.”

“Angelena and Sean are examples of what our Catholic Social Teaching challenges each of us to reflect upon as we are all made in the image of God, called to walk in solidarity with our brothers and sisters,” said Fortier who made social justice the theme for Catholic schools over the next three years. “Homelessness is a complex problem, however, it shouldn’t be a problem for the wealthiest country in the world if we truly followed the Gospel and Church teachings.”

By Glenda Meekins of the Florida Catholic, November 17, 2021