Transformed in Christ at Pentecost 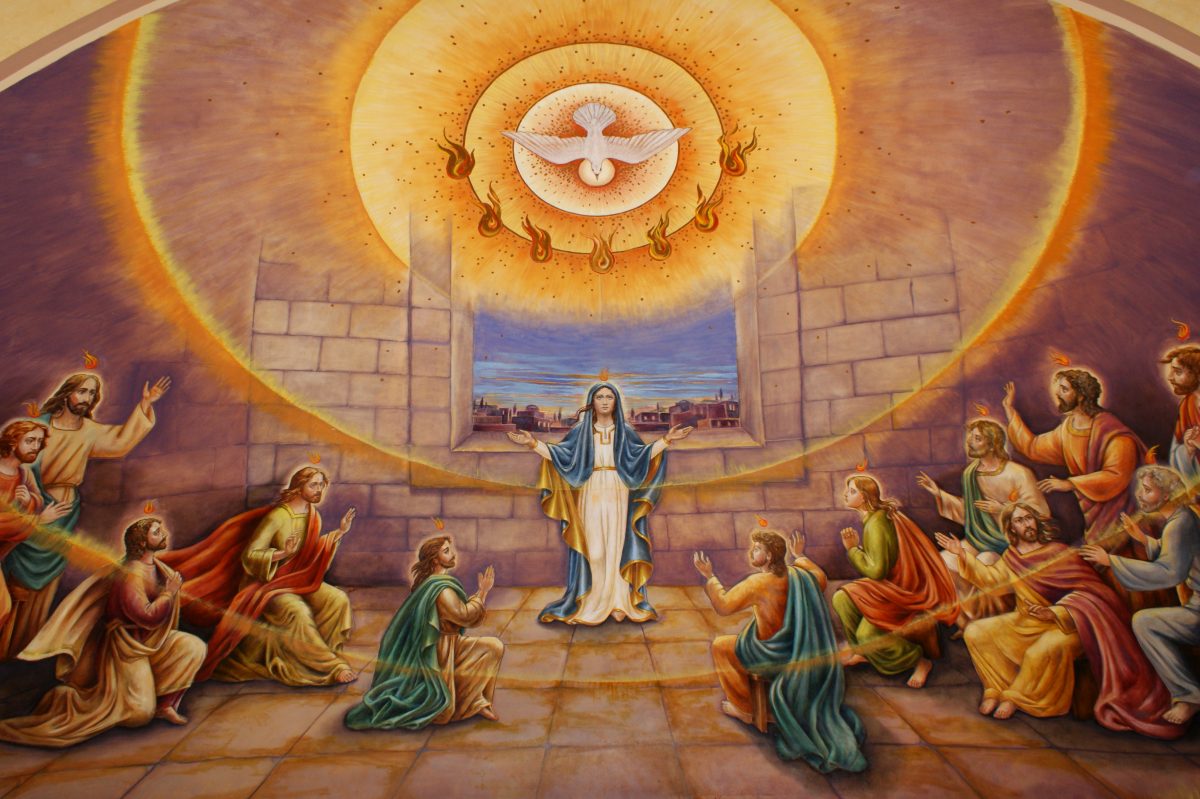 Mural depicting the decent of the Holy Spirit at Pentecost over the altar of St. James Cathedral, Orlando. (GLENDA MEEKINS)

ORLANDO | If you were asked, “What is the most important word describing life as a Christian,” how would you answer? I’ll give you a few minutes to think about it…Ok, times up! What is it? Certainly, there are many contenders: love, mercy, sacrifice, prayer, obedience, disciple, patience, etc., etc., etc. Excellent as any of these choices may be, I would have to choose the word “in”. Reading through the letters of the New Testament, in particular those of St. Paul, count how many times and in how many various ways they use the phrase “in Christ” or “in you” to describe our participation in divine life and divine life dwelling in us. In fact, St. Paul uses this simple little word to capture everything we do and everything we are: “In Him we live and move and have our being” (Acts 17:28).

So how does that happen? Are we simply to keep His memory alive in our hearts and minds following Him like any of the other great teachers from the past who have left us codes of conduct? Those codes are helpful in shaping the ethical life, but in the end they all fall short since only “he who abides in me, and I in him, bears much fruit, for apart from me you can do…” some things?…many things but not very well?…no, you can do nothing, absolutely “nothing” (Jn 15:5). Only this mutual abiding justifies why His departure is better for us (Jn 16:7). The Holy Spirit that is then sent has no flesh to restrict His movement across time and space or prevent His penetration to the very depths of our being.

The Holy Spirit is the gift given on Pentecost. Pentecost (also called Shavout or the Feast of Weeks) literally means “50th” as it was celebrated 50 days after Passover (Lev 23:15ff). Agriculturally it commemorated the beginning of the grain harvest while theologically it recalled the giving of the Law on Mt. Sinai. So much could be said about how either aspect is brought to fulfillment in the Apostles and the nascent Church, but alas, space only permits choosing one.

The Law was no longer to be written on tablets of stone externally, but on hearts of flesh internally (Jer 31:33). Though it may have once been punitive it now became performative, transformative for those in whom the Spirit dwelt: “If the Spirit of Him who raised Jesus from the dead dwells in you, he who raised Christ Jesus from the dead will give life to your mortal bodies also through His Spirit which dwells in you” (Rm 8:11). Whenever the Holy Spirit descends, things happen – chaos becomes cosmos in the first creation; cowardice becomes courage in the new creation, the birth of the Church. This same action takes place (a “little” Pentecost) with the celebration of every Sacrament during the epiclesis, or “calling down upon”. When the minister extends his hands over the stuff of the Sacrament (the technical term is the matter) and says the prayers, internal transformation happens by the power of the Holy Spirit: a watery tomb becomes a womb, bread becomes Body, sinner becomes saint, two become one, suffering becomes sanctification, and a man becomes another Christ. Outwardly all seems to remain the same while inwardly there is a new creation: grace is present, Christ is present in a new way.

The Sacrament most closely corresponding to Pentecost is, of course, Confirmation when the Holy Spirit descends to impart its sevenfold gifts and bring to completion (or harvest) the process of Christian initiation. As it is currently celebrated in the west, there is a fulfillment of the Jewish celebration of Bar Mitzvah or becoming a son of the Law. This came with rights (e.g. participation in public worship) but also responsibilities (e.g. following the Law). But those responsibilities were often a yoke to be borne, a custodian to keep men restrained. “But now that faith has come, we are no longer under a custodian; for in Christ Jesus you are all sons of God [and not the Law]” (Gal 3:25). The Spirit once wrote the Law upon stone, then upon hearts, and now brings the Law (and us) to its perfection in Christ (Rm 10:4).