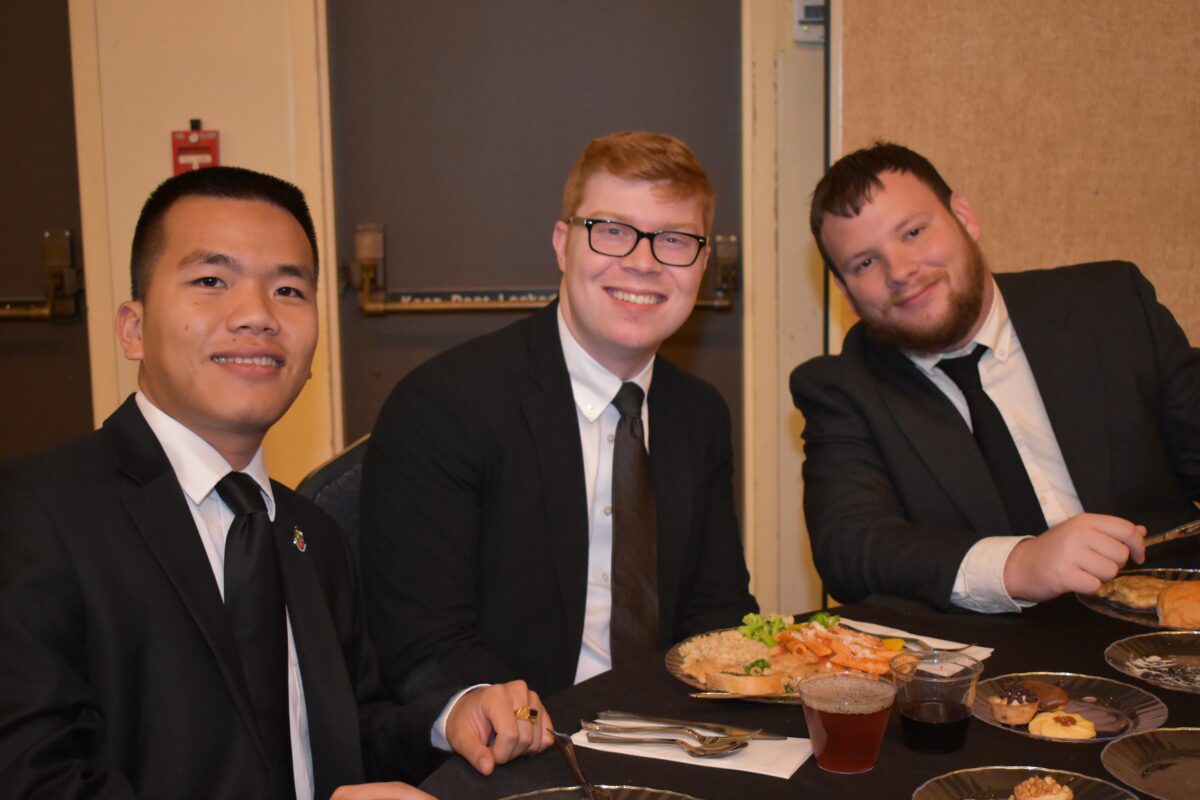 The culmination of years of study and prayer will take place on May 28, when Deacon Zackary Gray and Deacon Joseph Tran are ordained to the priesthood for the Diocese of Orlando. In the midst of their final preparations, the young men had the opportunity to reflect on their journeys that have brought them to this long-awaited day.

“I’ve been studying for nearly a decade for this moment and it will soon be here!” said Deacon Zackary. “I’m very excited and very looking forward to it.”

Deacon Zackary is the oldest of four children, born and raised in Ocala, Florida. As a high school student at Blessed Trinity, his grandparents arranged for him to attend a Steubenville Youth Conference when he was 14 years-old. That weekend would change his life.

“I had a powerful adoration experience. It was in adoring the Eucharist that God came into my life full-force. I came back from that really determined to have a deeper faith life, to attend Mass with a different attitude,” remembered Deacon Zackary. “That was the single most pivotal moment of my life. That was the first time I thought about being a priest.”

When he returned from Steubenville, Deacon Zackary joined the Blessed Trinity youth group. A year later, they went on a mission trip to the Dominican Republic. It was there that Deacon Zackary experienced his second most formative experience.

“Adoration is where the Lord showed me how much he loves me and the mission trip is where he gave me the desire to serve,” he said. “It was an eye-opening experience.”

But when high school graduation came, Deacon Zackary found he was not quite ready to commit to the seminary, opting instead to attend his local community college to study law. He was three years into his undergraduate degree when he began to have a strong feeling of dissatisfaction. Despite pursuing a subject that he loved, he wasn’t happy. After a late night of searching for articles and videos on the priesthood, he emailed the Diocese of Orlando Vocations Office.

“Immediately after I sent it, I googled ‘How to retrieve an email,’” recalled Deacon Zackary with a laugh. “But it was too late. The next day they reached out to me and we started the process of prayer and discernment.”

Meanwhile, over 9,000 miles away in Dong Nai, Vietnam, Deacon Joseph Tran was also hearing a call from God. The oldest of three children, Deacon Joseph grew up playing soccer and video games and practicing the piano. Part of a devout Catholic family, he remembers hearing stories of the saints, walking to church almost daily, and eating dinner in front of a statue of Saint Joseph. All of these things laid a firm foundation of faith and inspired him to consider the priesthood from a young age.

“Those attitudes are treasures of my faith,” said Deacon Joseph. “I was involved in many parish ministries. I first played piano for the children’s choir when I was twelve years old. Being an altar server always amazed me. I felt like I wanted to do something for the Lord and his Church. I occasionally expressed my desire to become a priest.”

At 20 years-old, Deacon Joseph’s family moved to Melbourne, FL and he began attending Eastern State College, majoring in mechanical engineering. He was immersed in his studies and working at a nail salon when his uncle, who is a priest, visited from Vietnam and asked him if he still had the desire to enter the priesthood.

“When my uncle reminded me about priesthood, I knew what God wanted me to do at that moment. I applied to enter the seminary,” remembered Deacon Joseph.

He entered St. John Vianney Seminary in 2014, where he would be joined one year later by Deacon Zackery. Together they would spend the next several years studying philosophy and theology and receiving the intensive formation needed to become a priest. Now, just weeks away from ordination, they are both eager to give their lives to God and his people.

“I’m looking forward to celebrating the sacraments and spending several years with a community, getting to know the people and walking with them on their journeys,” said Deacon Zackary.

Priests are ordained for service. I want to serve God and the Diocese of Orlando without reserve,” said Deacon Joseph. “I love to celebrate Mass and hear confessions. Serving the poor is my priority no matter who they are or what language they speak.”

Deacon Zackary Gray and Deacon Joseph Tran’s Ordination to the Priesthood will take place on Saturday, May 28 at 10:00 a.m. at St. James Cathedral in Orlando. The Mass will also be livestreamed on the Diocese of Orlando’s Facebook page (www.facebook.com/orlandodiocese) and YouTube channel (www.youtube.com/orlandodiocese).