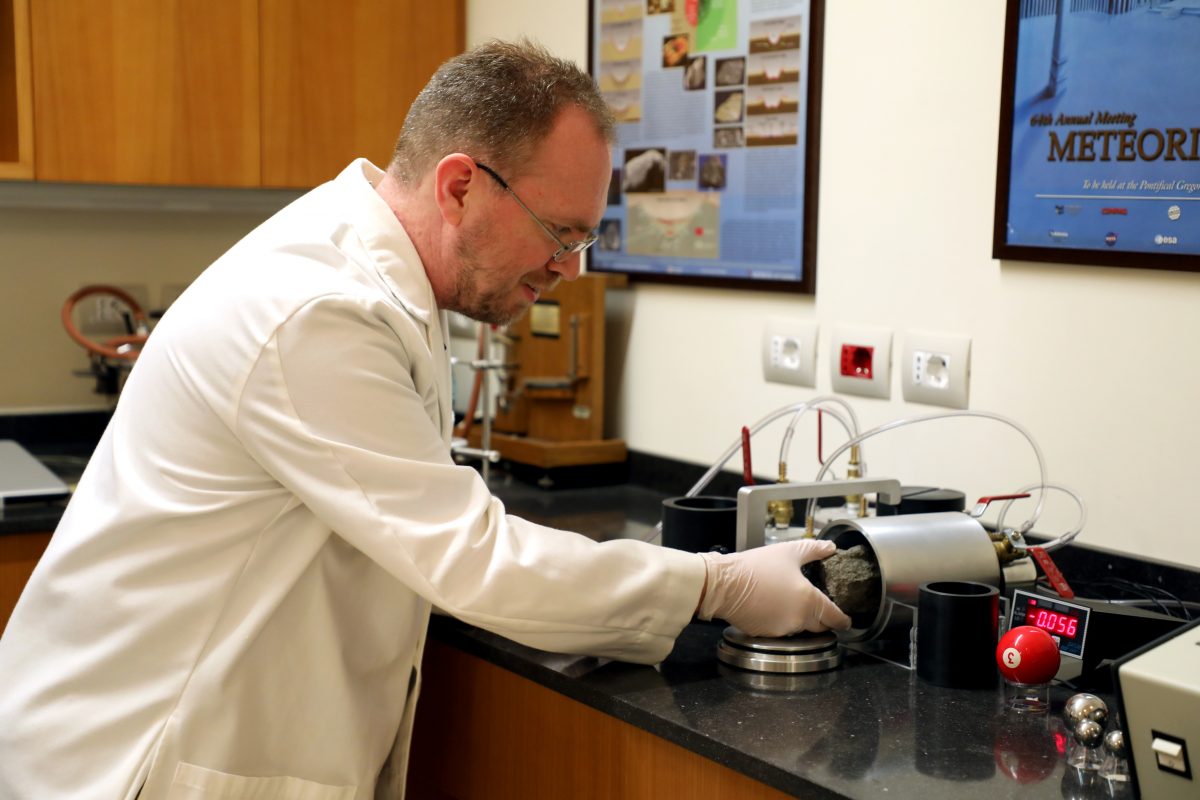 In the laboratory placing a meteorite in the pycnometer (an instrument for measuring density). (COURTESY VATICAN OBSERVATORY)

ORLANDO | “I think faith and science, not only go hand in hand, but they are absolutely necessary to support each other,” says Jesuit Brother Robert Macke, curator of the Vatican Observatory’s Meteorite Collection in the Papal summer gardens of Castel Gandolfo, just outside of Rome. Brother Macke graduated with his doctorate in Physics from University of Central Florida in 2010. By then, the observatory already had its eyes set on him and he “was just along for the ride.”

Before Brother Macke even considered becoming a Jesuit, he met Brother Guy Consolmagno, now director of the observatory, at an astronomy conference. He recognized his ring, a graduate like Macke of the Massachusetts Institute of Technology (M.I.T.). Brother Macke’s dissertation at UCF was preparation for his work at the Vatican Observatory where he is now curator of the Vatican’s collection of 1,200 specimens.

What better place for a Jesuit brother well-versed in science, physics, philosophy, and theology? The Vatican Observatory is one of the oldest active astronomical observatories in the world, with its roots going back to 1582. Hoping to counteract accusations that Church and science conflicted, Pope Leo XIII formally re-founded the Specola Vatican (Vatican Observatory) in 1891. Operated by Jesuits since 1907, the hub of space exploration celebrated its 130th anniversary March 14, 2021.

Brother Macke spends his days collaborating with other curators or working in the lab, less so during the pandemic. He studies the physical aspects of meteorites like density, porosity and thermal properties. Brothers Macke and Consolmagno devised a unique system to measure these features, work that began when Macke was at UCF. Their system has become the industry standard allowing non-destructive, non-contaminated study of specimens.

Currently Brother Macke is working closely with the National Aeronautics and Space Administration (NASA) on the OSIRIS-REx mission which collected specimens from Bennu, a near-Earth asteroid. The mission launched in September 2016 from Cape Canaveral Air Force Station. The spacecraft reached Bennu in 2018 and will return a sample to Earth in 2023. He is also collaborating on Lucy, the first mission to the Trojan Asteroids, set to launch in October. (Lucy: The First Mission to Jupiter’s Trojans | NASA). According to NASA, “these primitive bodies hold vital clues to deciphering the history of the solar system, and perhaps even the origins of organic material on Earth.”

“We are definitely interested in increasing the human race’s possibilities and broadening our minds–increasing our awareness of the wonders of the universe, that is all around us,” Brother Macke noted. It’s that kind of awe and wonder Pope Francis speaks about in chapter six of his encyclical Laudato Sí , “the life of the spirit is not dissociated from the body or from nature or from worldly realities, but lived in and with them, in communion with all that surrounds us.”

Sitting in his office, one can see behind him a reflection of Brother Macke’s love for everything stellar. His favorite Star Wars and Star Trek models are scattered about as he focuses on his mission – increasing awareness of the Vatican Observatory “by doing good science and exploring new things.”

“It’s important not be constrained by concepts of how things ought to be, but by studying the way things are,” he said. “It’s one of the ways we can really explore this wonderful universe.”

There are more than a dozen researchers at the observatory from different nations and nearly every continent. Deum creatorum venite adoremus or “Come let us adore God the Creator” is their motto.

“This universe is God’s creation… we are not trying to discover God in the universe,” Brother Macke explained. “We are not looking for evidence of God. The evidence we need for God is in the heart— it is not to be found by tinkering away in the laboratory… by recognizing creation as God’s creation, we appreciate the God who created it. It is not an attempt to discover in an evidentiary sort of way where God is hiding in Creation. God is not hiding in Creation. God is the cause of all things.”

Although it’s their job to have their heads in the clouds, the team is always searching for new and exciting ways to communicate with the faithful. They have a new podcast and Dr. Daniel Britt, Professor of Astronomy and Planetary Sciences at UCF, recently joined Brother Macke to explain some of the biggest moments in the observatory’s history. Other shows dive into topics like the possibility of living inside the moon and the best spot for a moon base.

If you’re still asking yourself, “Why does the Vatican have meteorites?” The observatory simply says, “we use these samples to see deeper into the mysteries of creation; in this way, it is our hope that, echoing the thoughts of St. Paul, St. Athanasius, and St. Augustine, we in the Church study creation so that we may come to know more deeply the Heart of the Creator.”

The Vatican Observatory Foundation put together a library of useful articles, videos, and websites on the topic of faith and science. This library can be found at: https://www.vaticanobservatory.org/education/faith-science-resource-center/