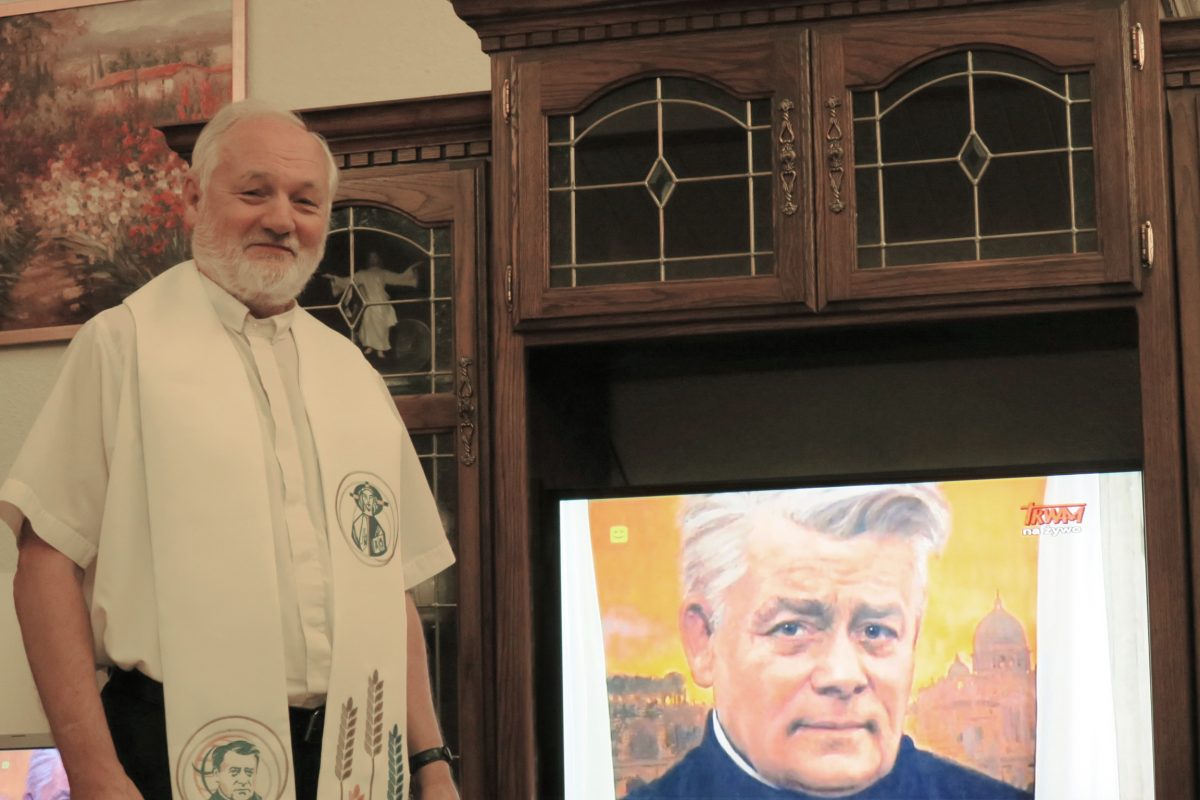 Salvatorian Father Eugeniusz Grytner, pastor of St. Thomas Aquinas Parish in Bartow stands with his stole before the television for the beatification of Father Francis Jordan, the founder of his order. He and several parishioners participated via Polish television in the pre-dawn hours of May 15. During Father Grytner’s time working in Tanzania, he translated the prayer for beatification into Swahili and gave it to all of his parishioners to pray. He feels their faithfulness in praying this prayer must have helped in the beatification. (COURTESY)

BARTOW | It is 4 a.m., May 15. It is still dark outside as a few parishioners from St. Thomas Aquinas Parish in Bartow gather at the rectory to join their pastor, Salvatorian Father Eugeniusz Grytner for the long-awaited beatification of his order’s founder, Venerable Francis Mary of the Cross Jordan, at the Basilica of St. John Lateran in Rome. The small group watched via Polish television.

“I was so sad not to be there,” Father Grytner said. He planned to travel to Rome with the group, but the pandemic made it impractical. “This is something beyond words,” he said. “We’ve all been waiting for this for a long, long time.” The pastor shared how he prayed copious novenas for his founder’s beatification.

Salvatorian Father Gregory Szewezyk, who serves St. Teresa Parish in Titusville concurred, noting the beatification comes more than 100 years after Venerable Jordan’s death in 1918. “From generation to generation, Salvatorians have prayed for the beatification… we are very proud.”

The recognition comes after a miracle was attributed to Venerable Jordan in 2014, when a lay Salvatorian couple’s unborn child was diagnosed with skeletal dysplasia, an incurable disease. The Brazilian couple asked their fellow Salvatorians to pray for the venerable’s intercession. The child was born completely healthy.

Father Octavio Trejo-Flores, S.D.S., parochial vicar of Our Lady of Lourdes Parish in Melbourne, recalled the announcement of the miracle, which advanced Venerable Jordan’s beatification. “It was the greenlight,” he said. “All this time the excitement within me grew.” Although the pandemic prevented attending in person, Father Trejo-Flores said, “the joy overcame the sadness.” “There is much rejoicing. This pandemic has been like a black cloud hanging over. The beatification was like a ray of light from the sky. Knowing our founder, Father Jordan, takes care of his sons and daughters… nurtures my hopes and increases it.”

Father Grytner said he believes his order’s founder would not have wanted the accolade of beatification and perhaps thwarted its progress, choosing “the time when the world stopped, so it would be done in a very simple way.”

Recalling his attraction to Father Jordan’s humility and missionary zeal, Father Grytner noted he became a Salvatorian in the hopes of serving as a missionary in Africa. His dream of spreading the Gospel to other nations came true when he was sent to Tanzania where Father Grytner served for 29 years before being relocated to the United States.

He said Father Jordan’s life “stressed humility”. “He believed so strongly that God can only work through humble people who submit to Him totally in faith and trust.” In Father Jordan’s time, the Catholic church in Germany was suppressed. It was a period called Kulturkamf, which discouraged religious practice. Father Jordan could not celebrate his first Mass in his home parish because of this. Many people fell away only increasing his fervor to spread the Gospel.

Blessed Francis Jordan’s feast day will be celebrated on July 21, the anniversary of his Ordination to the Priesthood.