Vigil to pray for trafficking victims 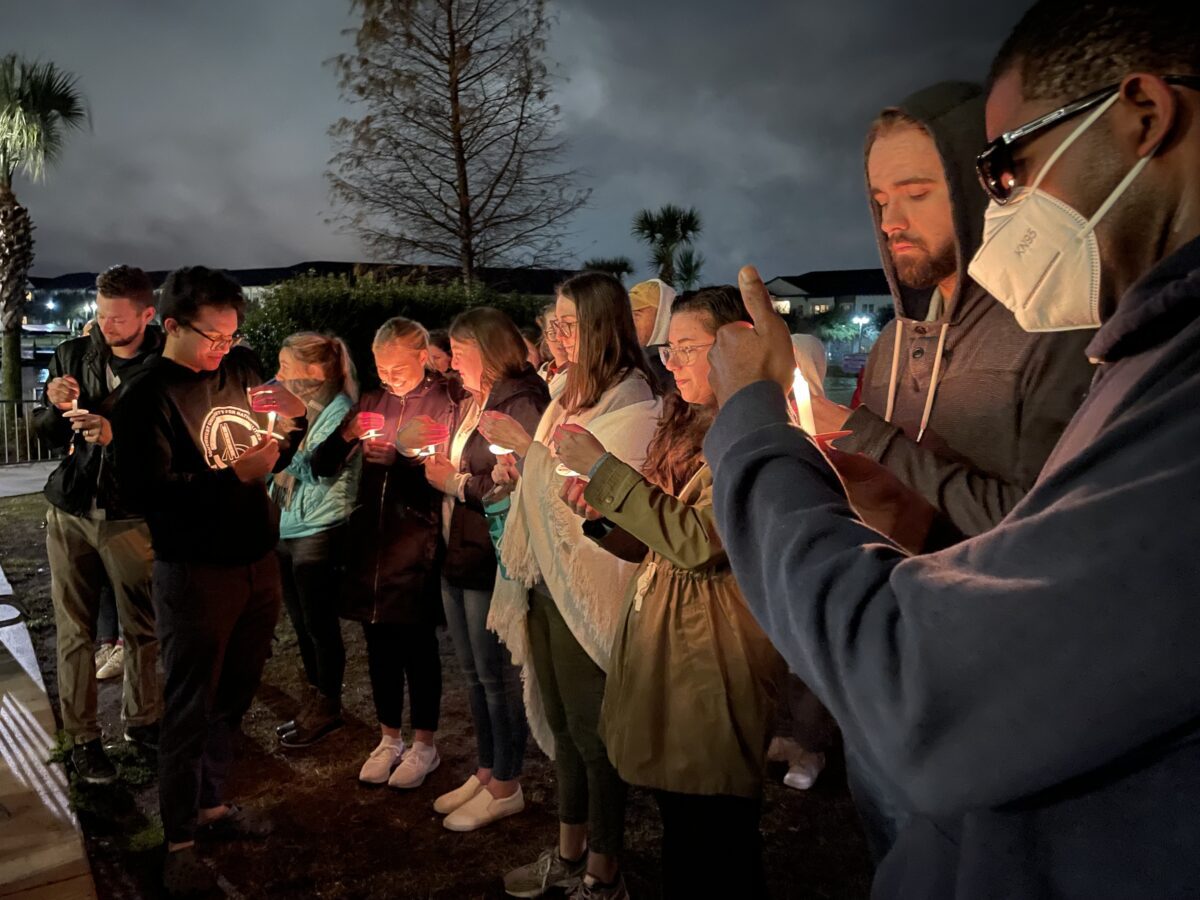 The Diocese of Orlando Human Trafficking Task Force hosted a vigil for victims at Center Lake Park in Oviedo. The prayer service brought almost 50 people out in the cold and rain Feb. 8. The vigil took place on the International Day of Prayer and Awareness and feast day of St. Josephine Bakhita, patron saint of trafficking victims, Feb. 8. (GLENDA MEEKINS)

OVIEDO | A powerful message cut through the cold, rainy night at Center Lake Park, Oviedo February 8. With dozens of supporters around her, Marianne Thomas, a survivor of human trafficking and champion of her peers, pointed to God.

Thomas is Senior Director of Trafficking for One More Child, a non-profit organization that offers Christ-centered services to vulnerable children and struggling families. They work closely with law enforcement and religious organizations like Catholic Charities of Central Florida (CCCF) to raise awareness about this horrific crime. Their mission is urgent. Human trafficking is rampant across Florida. Orange County ranks third in number of victims in the state.

“Catholic Social Teaching starts with recognizing that each life is sacred and has dignity. Every life is precious and efforts like this affirm how important that teaching is and why awareness and education efforts are so important,” noted Gary Tester, President of CCCF.

The community helps keep Thomas pushing forward. She thanked each person for their work and prayers, giving glory to the Lord. Looking back, she often can’t believe she broke free of her captors.

Megan Sladek, mayor of Oviedo, confirmed the crisis by sharing she has a friend who had been trafficked and the daughter of another friend was targeted as well.

“I felt this vigil was important because people do not realize how prevalent human trafficking is,” she said. She asked participants to commit to at least one way to help stop this crime.

CCCF Director of the Human Trafficking Task Force, Christine Commerce, noted people can help by hosting a training, volunteering with a local agency, or observing signs of possibly trafficked individuals such as injuries or abuse, a much older boyfriend/girlfriend, fearfulness and avoidance of eye contact or someone who is not in possession of their own documents (passport).

Prayer candles burned brightly for everyone currently suffering this form of modern slavery, survivors and those working to end exploitation. The event spoke to Most Precious Blood Parish Advocacy and Justice members, Eileen Janke and Mary Catherine Deeter. They plan to share what they learned with their Catholic community.

“I feel like education and knowledge is a key to a lot of things,” Janke noted. Deeter echoed those sentiments saying, “(Human trafficking) is a quiet evil. People don’t realize how pervasive it is in the community or how widespread it is. It could be your neighbor and you wouldn’t even know it.”

CLICK to learn more about how you can help.

By Glenda Meekins of the Florida Catholic Staff, February 10, 2022