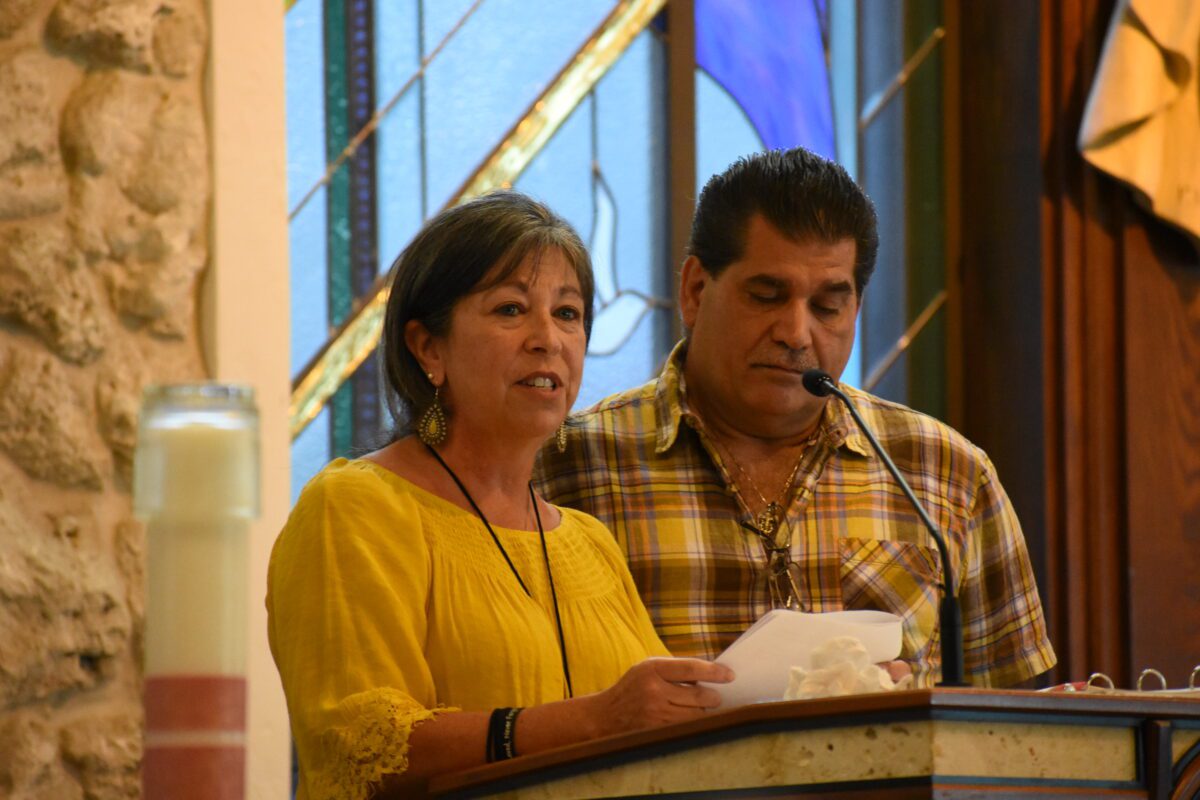 Lori and Frank Bernstein share their story of blessings, brokenness and gratitude from the past year at a Thanksgiving Day Mass at Epiphany Parish, Port Orange. (GLENDA MEEKINS)

PORT ORANGE | | Three days before the start of Advent, people filled the pews at Epiphany Parish to give thanks to God for His blessings over the past year. They did not expect fellow parishioners, Lori and Frank Bernstein, to address the community in a very real way, sharing both their blessings and brokenness.

Father Karl Bergin invited the Bernsteins to speak and blessed them. It’s been a Thanksgiving Day Mass tradition for 16 years – something he picked up from Msgr. Richard Walsh when he served at St. Margaret Mary Parish in Winter Park. It was his hope that the speakers bring light to others and a “sense of being thankful for it all.”

Frank began with blessings. He and Lori have been married 37 years and have four children and two grandchildren. They moved to Daytona Beach Shores in 2013 and immediately participated in a Christ Renews His Parish retreat at Epiphany. “It was one of the best experiences. We formed many valuable and lasting friendships through that weekend and the events that followed,” Lori recalled. The church family would often bring them peace and strength in difficult times.

Frank began to weave in bits of brokenness. Months into a COVID-19 induced furlough, he began 2021 without work. Thankfully, Lori quickly found a job close to home and they were making it through. January also welcomed an unexpected expansion to their household. Lori’s 95-year-old aunt, Carmela, moved in after a bad fall. The family bought her a tablet and she even mastered social media.

Within weeks, their grandson was born two months early because their daughter-in-law’s organs began to shut down. “We thought we would lose her and the baby,” Lori said. The family exhausted all options, when the baby finally had to be delivered. He was just three pounds. “We were all so frightened,” recalled Lori, “but God was good and heard our prayers.” Mother and son eventually recovered, and their grandson is now a healthy 10-month old.

While rejoicing in the birth of their new grandson, the Bernsteins prayed over their other grown children. After years of struggling with drug addiction and mental illness, their son, Frankie, died this past summer.

Frank explained Frankie “came into the world with many obstacles.” He was adopted and his birth mother also abused drugs. Struggling with self-esteem and his family history, Frankie began self-medicating at age 13. “A doctor had told me the worst part was that Frankie knew he had challenges and didn’t like himself because of that,” Frank said. “He became a dad at 17 and was not able to father his daughter since her mom moved away. We prayed unceasingly for God to heal him, always hearing and believing, ‘God can move mountains.’” Lori comforted herself and boosted her confidence with Scripture, often praying in the middle of the night when she could not sleep.

Frankie was involuntarily committed to a mental health center more than a dozen times in his life when his illness became unmanageable. In May of 2021, Frankie’s condition progressed dangerously. Lori and Frank tried to have him committed once again, but their request was denied. Frankie died of an overdose Aug. 3.

Grateful for the sustenance of their faith community, the Bernsteins recalled the many acts of unconditional love with which their fellow parishioners responded. Frank noted how Frankie was welcomed by his Christ Renews His Parish men’s group early on (now called “Welcome”). Noting Frankie’s spiritual side, he was even invited to become a Knight of Columbus, which Frankie embraced – one of the few joyful experiences he had in recent years.

Frank found gratitude in having more time to spend with his son during his unemployment. Witnessing his suffering more intimately helped him better accept the loss as a mercy.

“Losing Frankie was a devastating loss,” Lori acknowledged. “It’s hard to see God‘s goodness in the midst of losing our precious son… Our grief is unimaginable and sometimes seems unbearable. We miss Frankie’s smile, laugh and childlike spirit,” she said.

Broken, the Bernsteins once again turned to Scripture. “For my thoughts are not your thoughts, neither are your ways my ways,” declares the Lord in Isaiah 55:8, Frank quoted. “We don’t understand God’s ways. His thoughts are higher than ours. We believe God knows best…our Heavenly Father knows best.”

Lori and Frank found comfort in the fulfillment of the Beatitude, “Blessed are those who mourn for they will be comforted.” Parishioners, family and friends came forward to comfort them.

Lori recalled how full the parish was at Frankie’s funeral Mass. “…full of people who loved and cared about him despite his disabilities and weaknesses… Those acts of kindness live on in our memory.”

“Our brokenness, when shared with you brings us the comfort you have given us,” explained Lori. “They say we are one body in Christ and this body of Christ has carried us through this hard time. We are grateful. We are loved… In sharing we grow closer, and our burdens become lighter.”

By Glenda Meekins of the Florida Catholic, December 09, 2021