Pro-life advocates: Signing of HB 5 is just the beginning 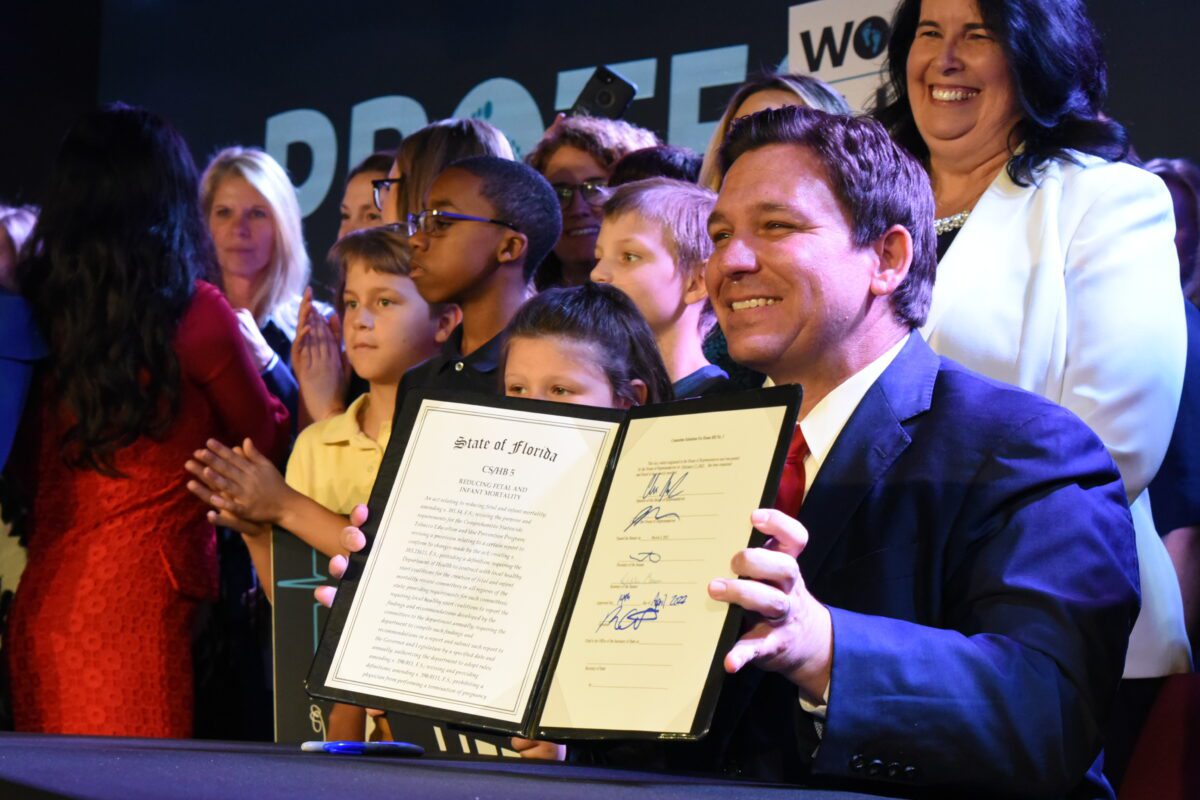 Gov. Ron DeSantis sign HB 5, a bill reducing the number of weeks before a woman can no longer receive an abortion from 24 to 15 weeks. Exemptions involving the jeopardy of the woman’s and fetus health and viability are included. The bill was signed at Nación de Fe, April 14 in Kissimmee. (GLENDA MEEKINS)

Present for the signing were dozens of pro-life advocates, including Bishop John Noonan, five priests and several religious of the Diocese of Orlando and directors of pro-life ministries. The new law includes provisions to improve infant health and analyze and reduce fetal and infant mortality, but also limits abortions in Florida to the first 15 weeks of pregnancy.

Christie Arnold, FCCB associate for social concerns and respect life, explained before the bill was signed into law, women in Florida could get abortions “up to the point of viability – around 24 weeks.” The new law pushes that time frame down to 15 weeks. “It just a greater protection for unborn children,” Arnold added.

Those who attended Catholic Days at the Capitol in February would recognize the bill as it was one of four talking points the Florida Conference of Catholic Bishops asked participants to discuss with their legislators during face-to-face meetings. At that time, the conference explained how the bill would “align Florida law with what will likely be federally allowed,” and added it closely mirrors the Mississippi law at issue in the U.S. Supreme Court case of Dobbs v. Jackson Women’s Health Organization.

“(The conference) worked on the initial stages of proposing different bill language in conjunction with the governor’s office.” Arnold told the Florida Catholic. They also wrote letters and testified in its support. “We are happy to see it pushed through.”

The governor signed the bill into law a stone’s throw from the JMJ Life Center in Osceola County. In the crowd at the signing were Bob Perron, executive director of the JMJ Pregnancy Center, and local volunteers of the Kissimmee center, which offers pregnancy-related services to those in need up through the pregnancy and the first year of a child’s birth.

“This is a big win for Florida,” Perron said. “The impact will be we continue to see more and more moms who need our help…across the board, from young moms to moms who are homeless.” More moms receiving services and support — financial and emotional — is a definitely a positive outcome.

George and Joanne Olson, of St. James Cathedral Parish in Orlando, are volunteers at JMJ and attended the signing. Joanne is a counselor at the center and said felt “very connected” to the women and families she has met there.

“Most times I got in the car and would say to myself, ‘Well, that was more for me than for them’ because they have incredible stories,” she said. “The strength they have made me feel, certainly my life doesn’t equal what they’ve lived through.”

Her husband, George, serves as financial secretary for Knights of the Columbus Council 12402 out of St. James, which started the Laps for Life fundraiser nine years ago. Funds raised are used to buy ultrasound machines for pregnancy resource centers, which George said cost roughly $30,000 each. He added the last Laps for Life raised more than $90,000 and provided at least four (ultrasounds) to JMJ. George said. “When the moms see the pictures they realize this is a real, live baby.” He said the 15-week period is “going to make it even better.”

Dr. John Hartman, a family practitioner in Kissimmee who delivered babies until two years ago, sees the new law as “the greatest thing,” and looks forward to the “ripple effects” of its establishment. He explained, once past 14 weeks, a baby’s heartbeat is “very well-established. (With an ultrasound) you can see everything, even fingernails,” said the parishioner of Holy Redeemer Parish in Kissimmee. “How does that happen birth after birth? It’s astounding. It makes me think, ‘Wow, God did a great job. It’s a joy every day.’”

The law does include exemptions, but unlike other laws, there is no exemption for rape or incest. Exemptions do include: if the procedure would allow doctors to save the life of the mother; if it were to avoid an irreversible and substantial impairment of a major bodily function of the mother; and if two physicians determine that a pre-viable fetus has a fatal fetal abnormality.

Keeping in step with the law’s title — “Reducing Infant and Fetal Mortality” — the legislation includes provisions to improve infant health and analyze and reduce fetal and infant mortality. During the conference, the governor stated 11 more county-based committees would be funded to study how to reduce infant mortality in those respective counties.

Leidy Rivas, director of Catholic Charities of Central Florida’s Culture of Life office, sees the law as a “win because so many babies will be given the opportunity and a chance to live.”

“I see this as the beginning of what is yet to come. It is a step in the right direction,” she said, especially in light of a U.S. Supreme Court ruling in Dobbs v. Jackson Women’s Health Organization, which deals with the constitutionality of a 2018 Mississippi state law that banned abortion operations after the first 15 weeks of pregnancy and whether all pre-viability prohibitions on elective abortions are unconstitutional.

“It is going to be a huge stride for us. As a church we really have to be ready, prepared in prayer, and ready to assist these men and women who will be looking out for our assistance and our help.”

Rivas’ office has a list of all the vetted pregnancy centers in the Diocese available on the Catholic Charities website — https://cflcc.org. A visit to the site will help those wondering where to start.

The legislation — which goes into effect July 1 — joins other bills signed into law that serve to curb and restrict abortions. Lawmakers had passed a requirement that minors get consent from their parents before having abortions.

On April 8, a Leon County circuit judge upheld the constitutionality of a 2015 law that gives women 24 hours to reflect on information provided by physicians before proceeding with abortions. In her ruling the judge stated, the act “merely brings abortions in line with the standard of care.”

By Jean Gonzalez and Glenda Meekins of the Florida Catholic Staff, April 19, 2022

Click here to read about the Florida Conference of Catholic Bishop’s News Release regarding the 15 Week Abortion Ban.